Almost every year, Ryerson students face long waits on their Ontario Student Assistance Program funding, and many don’t receive it in time to pay tuition before it’s due. 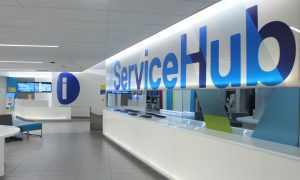 The Ryerson Service Hub is home to the Financial Aid office, where OSAP applications are handled. (Photo by Isabella Perrone)

Some students, like first-year urban planning student Adrienne Mariano, rely on their OSAP funding for textbooks and supplies.

“I got my OSAP pretty late because I applied later on, so that was kind of my fault,” said Mariano. “The earlier application might help if people know they can apply now. I might consider applying early, because it seems really helpful.”

Some students are hoping that the early application process will make it easier to apply for OSAP.

“It might encourage more people to go for OSAP to begin with,” said first-year sociology student Natalie Scuderi. “I guess it could just be more convenient overall for people to get ahead and not feel frazzled about everything they have to do to prepare.”

Scuderi also said that she will most likely take advantage of the early application.

Ryerson’s Financial Aid office is also preparing for the earlier opening to OSAP applications. Their team is away on a two-day conference about the new process and will be available to assist students on campus after Nov. 14.

This addition to OSAP’s process comes shortly after the launch of their ‘free tuition’ initiative.

“Right now in Ontario there are 210,000 students who are at college or university and they are not having to pay tuition,” Wynne stated at the announcement Wednesday.

For the 2017-18 school year, OSAP applications were up 20 per cent from last year. The provincial government hopes that the early start to the application period will give students and families more time to budget for the upcoming year.

No charges to be laid in death of Ryerson alumna