A new smart district will be calling Toronto its new home.

Alphabet Inc., a parent company of Google, will be working with Waterfront Toronto to help develop the East Bayfront into a smart district.

Sidewalk Labs, which is a unit of Alphabet Inc., announced the partnership with Waterfront Toronto Tuesday. The pair will be working on developing a new smart neighborhood named Quayside on the waterfront of Lake Ontario. The smart district will scale the Port Lands, which is one of North America’s largest areas of undeveloped land, an area that is more than 800 acres.

Waterfront Toronto chose to partner with Sidewalk Labs after they responded to a request for proposals that was issued by Waterfront Toronto, seeking an innovation partner to develop the eastern waterfront. Sidewalk will spearhead the development of the digital technology design concept.

“We are making a bold bet that innovative technology and forward-thinking urban design can make fundamental improvements in city life,” said executive chairman of Alphabet, Eric Schmidt at a press conference on Tuesday. “Toronto is the ideal place for Alphabet and Sidewalk Labs to do something impactful that we hope will foster new ideas that can be applied by cities around the world.”

Waterfront Toronto, which is funded by federal and provincial governments, will contribute C$1.25 billion towards flood protection and necessary infrastructure for the area of the waterfront. Sidewalk Labs will provide about C$60 million in piloting the project.

“What is interesting is they are committing to all good urban design and planning practices, but with a technology twist,” said Yew-Thong Leong, an architectural science associate professor at Ryerson and the managing director at SSG Architecture Inc. “I believe the technology angle is much more easily deliverable, especially from Google as they have brought many amazing innovations to market.”

Sidewalk Toronto will work to create an urban and digital technology-centered district that will be sustainable, affordable and also create economic opportunity. Their goal for the eastern waterfront is to create a hub of urban innovation that will allow development of start-ups, academic centres and local organizations.

“This project will be a true collaboration between the community and some of the brightest minds in urban development, generating thousands of new jobs and new opportunities for the people of this province,” said premier Kathleen Wynne at a press conference on Tuesday. 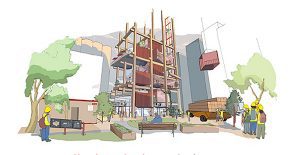 Alphabet will start the process by moving Google’s Canadian headquarters to the eastern waterfront.

“Google Canada themselves will move into Quayside, likely in an expanded capacity, and that can be a huge draw for start-ups into Quayside and by extension potential partnerships with Ryerson’s Zones,” said Leong.

Waterfront Toronto is a public agency established by the Government of Canada, Province of Ontario, and the City of Toronto to help improve social and economic potential of the waterfront area. They do this by encouraging urban revitalization, sustainable development and urban design. Sidewalk Labs is a unit of Alphabet Inc. that explores how new technologies can help solve big urban challenges and improve quality of life in cities.

The year long public consultation of the development plan is expected to kick off with a community town hall starting November 2017.