EDITORIAL: Ryerson must equip itself with naloxone

Over the last year, Canadians have watched more and more people die from opioid overdoses across the country. The government of Ontario might not be calling it an emergency yet, but based on the numbers, it’s hard to see how it isn’t.

Opioids, like fentanyl, which often show up in a powder form laced in other drugs, killed 865 people in Ontario last year — 300 more than in 2010. Deaths related to opioid overdoses claimed around 2,800 lives across the country last year.

But despite the deadliness of the opioid crisis, every citizen has access to a powerful tool in the fight against the drug. It’s an antidote called naloxone.

Naloxone is incredibly easy to access. Anyone with a health card can obtain a kit for free at pharmacies across Ontario. Using the antidote is even easier; the injection process is identical to using an epi-pen. Pharmacies also provide a short training session on how to use the antidote when they distribute kits.

Naloxone is harmless if used on someone who isn’t actually overdosing. There are no downsides to using the antidote. 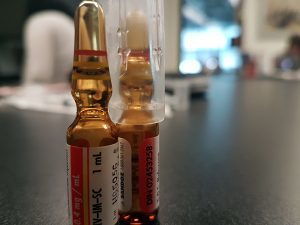 Naloxone can temporarily reverse an opioid overdose for up to 90 minutes. (Kayla Douglas/Linsey Raschkowan/Ryersonian)

Despite the easy access to this incredibly powerful tool, Ryerson University is not taking steps to equip themselves with the antidote. Currently, campus security and residence leaders don’t carry naloxone. The current protocol is to call 911 and wait for emergency services to arrive.

But health professionals like Deanna VandenBroek, a health promoter at Peterborough Public Health, say that immediately administering naloxone could, in some instances, be the difference between life and death.

That’s why waiting for paramedics to show up — Ryerson’s current policy — isn’t enough.

It wasn’t enough either for the RSU. They’ve taken matters into their own hands and decided to equip their equity staff with naloxone.

This inaction by our university is not acceptable. While the opioid crisis hasn’t reached the severity that it has in cities like Vancouver and Calgary, communities in Toronto need to get ahead of the curve so that we can protect our students from opioid overdoses. Overdose-related deaths are only rising, and people need to be prepared.

Fentanyl shows up in much more commonly used drugs like cocaine or MDMA, and the fact is that university students use those drugs.

Overdoses could happen unexpectedly at a party, or in a student residence if fentanyl happens to be laced in other drugs that students are taking.

The City of Toronto has been taking steps towards harm reduction for drug users, and it’s more important than ever that Ryerson follows suit. As more people die from opioid overdoses in Toronto, we need to act now to save students.

Ryerson prides itself on being innovative and ahead of the curve. We as a school need to use that reputation to fight this crisis so that we can save lives. Lives that are very much at risk right now.