Mickey Agnelli has something many people dream of—a way to make money doing something she loves.

Angelli is a fourth-year social work student at Ryerson behind the Instagram-based business Gal Who Sews. She got into the hobby of embroidery after attending a friend’s workshop.

“I had never tried anything like it before, but I was intrigued,” says Agnelli. “I draw, I paint, so I thought, ‘Maybe I’ll like this.”

During the two-hour workshop, she learned basic stitches but she didn’t get the hang of it right away.

“Actually, at that workshop I was terrible. I couldn’t thread my needle; I was such a mess. I was definitely the worst one in the class,” she says.

Even though she found it difficult at first, Agnelli kept practising her technique. After about five months of on-and-off practice she launched her Instagram account, Gal Who Sews.

“It took a little while after the workshop. I kind of forgot about it and thought, ‘I’m bad at this,’ and then I got some embroidery stuff for Christmas that I had asked for. That’s when I really got into it and actually tried to improve,” says Agnelli.

She initially launched Gal Who Sews as a platform to show her art to friends and family and not as a business venture, but things eventually took off. 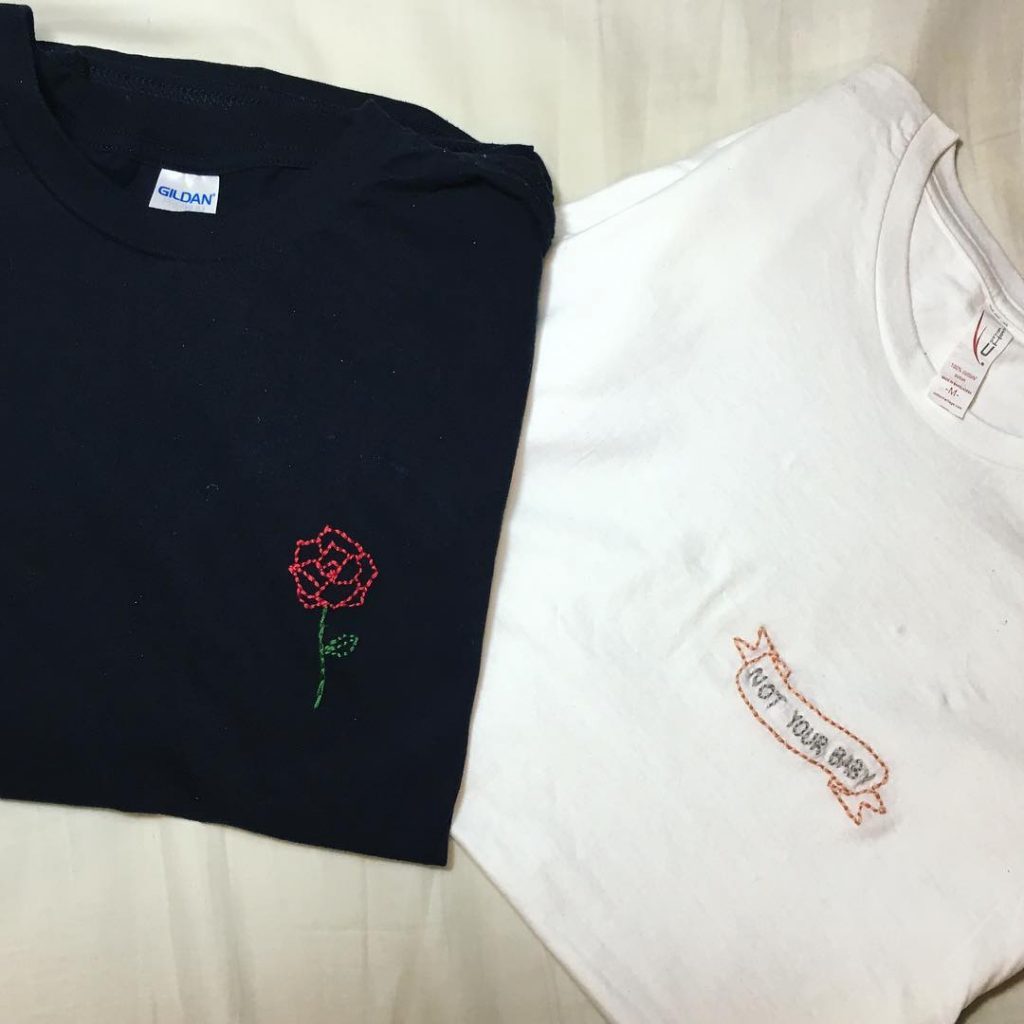 “I was pretty overwhelmed with the amount of interest and people who wanted to actually buy stuff from me,” she says.

Agnelli says the business is doing well, but it can sometimes be hard to keep up with during her life as a busy student.

“I’m glad it’s doing well, but I also have all these other things going on. It’s not always my primary focus, since I’m in school and in placement and all these other things,” says Agnelli. “It’s definitely made me a decent amount of money as a side hustle that I thought would never turn into anything. Plus, it’s such a good decompressor and I do it anyway, so why not sell it?” 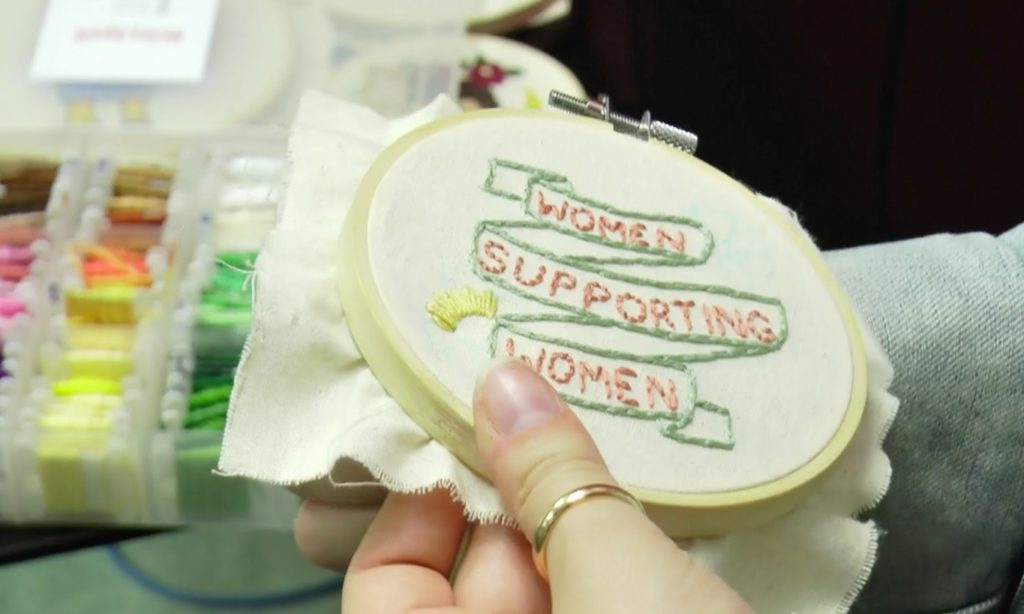 As for the designs, Agnelli often turns to intersectional feminism for inspiration.

“[Feminism] is just a large inspiration in my life, how I live and my values. So it’s kind of impossible for that not to bleed into my work, especially artistically,” she says. She’s currently working on a piece to celebrate International Women’s Day next Thursday.

One technique she has started to explore is mixing embroidery thread with the art of painting. Her first piece using this technique is a hoop featuring her favourite The Simpsons character, Lisa Simpson.

“I really liked the process for this piece. I’ve always loved painting so to be able to combine those two mediums was really fun,” says Agnelli. “I was really excited to make this piece so I think I did it all in one night, probably about five hours all together.” 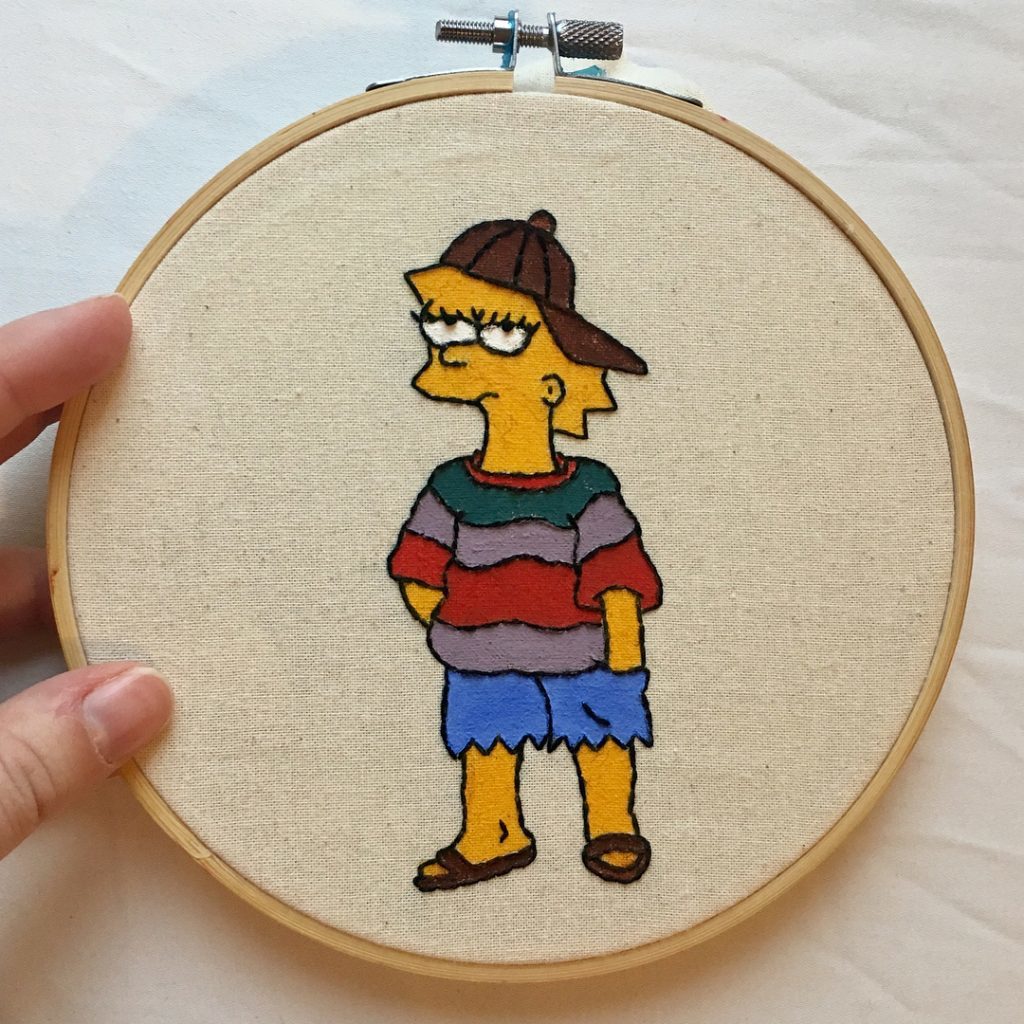 Since each piece is one-of-a-kind, a number of factors go into determining how long it takes to complete the design.

“It depends how big, how detailed the piece is, how many colours are in it, but also definitely how into it I am. When I’m really into a piece I’ll finish it in one night,” says Agnelli. “But a pretty simple, small design would take me about two to three hours minimum, so it’s very time consuming.”

She doesn’t usually complete the designs in one single sitting. One of her most time-consuming pieces is of a tiger head, complete with detailed stripes and an open mouth with sharp teeth. Due to the intricate detail, it took her approximately 10 to 15 hours total to complete. 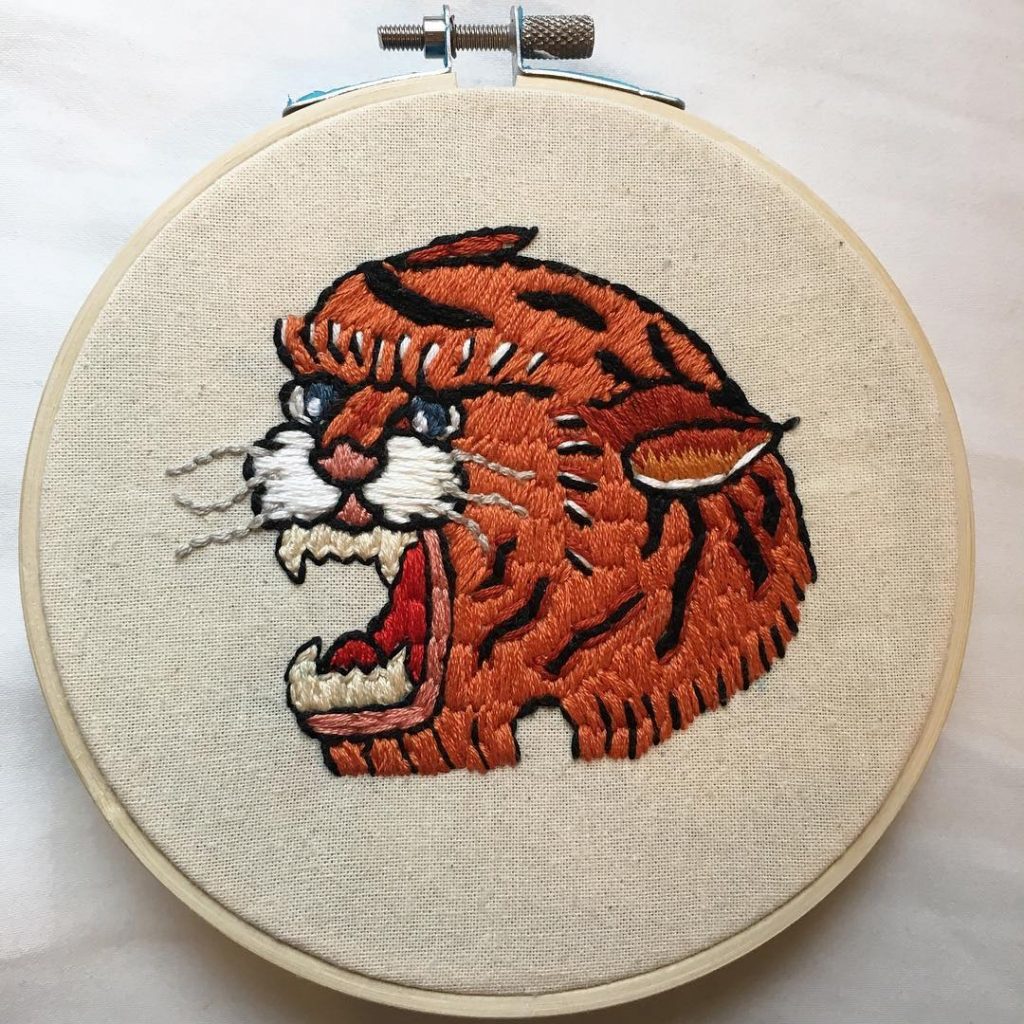 The tiger hoop that took Angelli approximately 10 to 15 hours to finish. Courtesy: GalWhoSews/Instagram.

Though it can be time consuming, Agnelli finds it to be a great destresser.

“It’s so nice because it’s mindless and I do it in front of the TV, and I’d be watching TV anyway, you know?” she says. “Once I have the design laid out, I’d say that’s the part that takes the most focus, after that I just zone right out. It’s totally relaxing. There’s a reason grandmas love doing this.”

Sometimes she finds the creative and business processes tough to merge. At one point she had to stop taking custom requests because she felt that they were “dulling her passion,” since she didn’t get to express her own creative ideas.

“It’s kind of this weird thing, trying to find a balance of [my ideas] and still taking orders of what people want, even though it’s not necessarily something I’m passionate about,” says Agnelli. “They want something that means a lot to them …. But for me to make it, it wasn’t as necessarily as creatively fulfilling because they tell me exactly what they want. I’m still trying to find that balance between the two.” 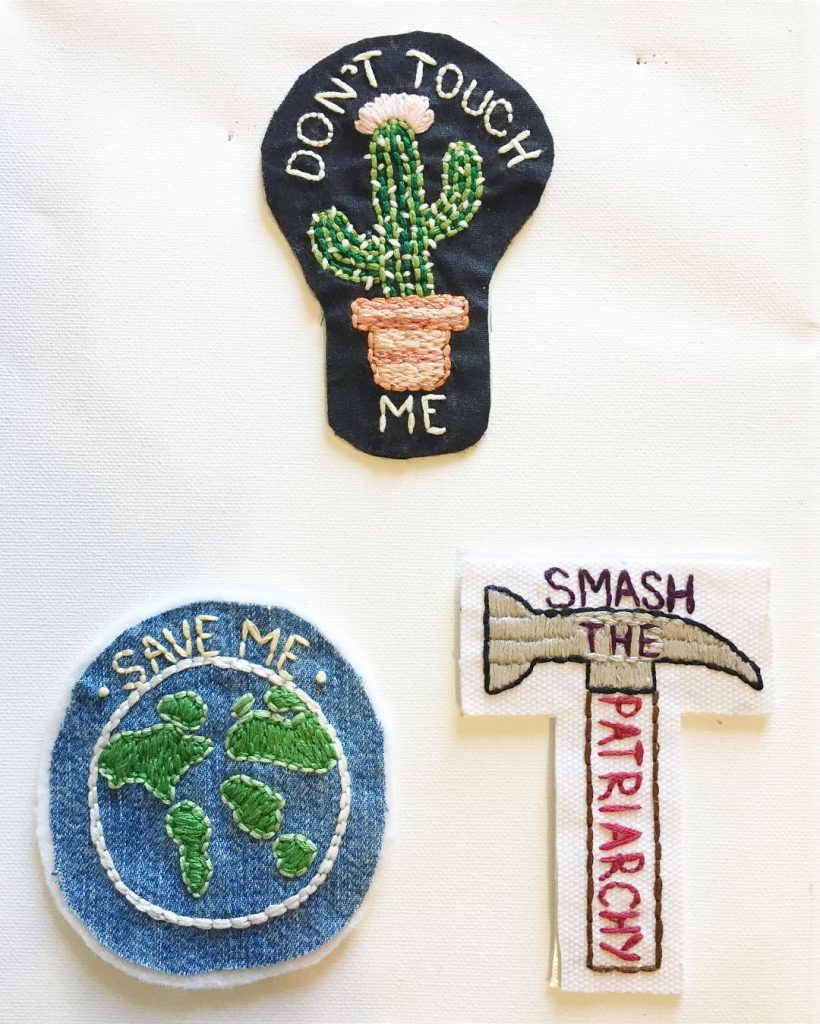 A variety of patches Angelli has made in the past. Courtesy: GalWhoSews/Instagram.

Despite this conflict, Agnelli says seeing how much her clients love their custom pieces is the most rewarding part of it all.

“Seeing them wear a T-shirt really proudly, or wear a patch on their jacket and they’re so happy to have it on, or it’s something that means a lot to them or something they specifically wanted, is really rewarding,” says Agnelli. “Just the custom aspect of embroidery is really cool.”

She now teaches various workshops with the friend who first inspired her to get into embroidery.

“It’s a really fun way to teach other people how to embroider and see the passion spread,” says Agnelli. “It’s really fun to kind of reignite why I got into it and how I got into it [through these workshops]”.

When it comes to growing Gal Who Sews as a business, Agnelli is in no rush.

“Right now it’s definitely my side thing. It’s kind of hard when hand embroidery is pretty time-consuming,” she says. “I’ve had this conversation [with] a lot of people and they’re like, ‘Take it to the next level!’ and I’m like, ‘I have two hands, so I don’t know how I would do that.’”

Some artists submit their designs to be machine-embroidered, but Agnelli says she loves the craft too much to consider that option as of now.

“I just have such a love for the physical act of embroidering and I don’t think I would enjoy it if I was getting other people to do my designs. So much of why I love doing this is the catharsis of actually embroidering. I’m really happy with it right now being a small side thing, but I don’t know, maybe one day. I’d have to figure out how to work a lot faster or maybe get other people in on it.” 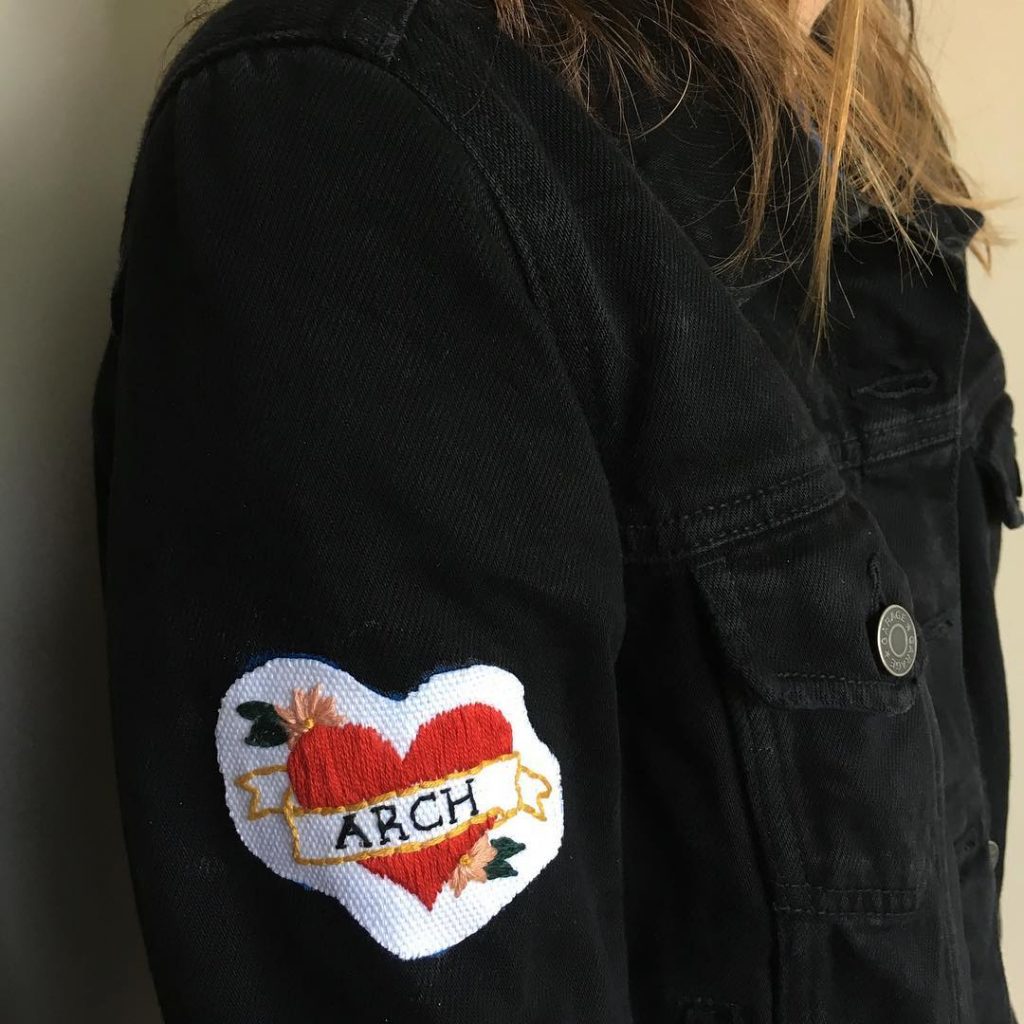 Agnelli made this jacket patch for a friend who is studying architecture. Courtesy: GalWhoSews/Instagram.

Internet-based 911 service may be catching on for some students, but they should stay cautious