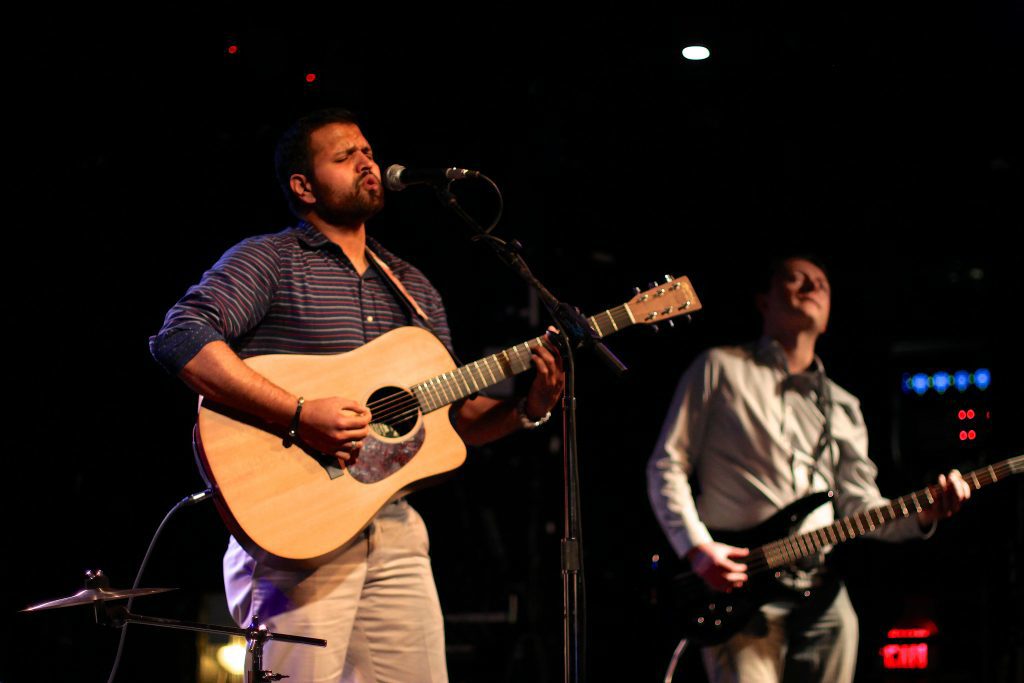 Aditya Aman has come a long way since he graduated from Ryerson in 2009. When he was a student, he was too shy to even take part in an open mic night. Eight years later, he now feels comfortable playing to an audience.

“Once you do something a few times, it feels like brushing your teeth. You don’t think about it,” said Aman before taking the stage at Lee’s Palace with his band, Beige Shelter.

Aman has played at a few different venues in Toronto, including Smiling Buddha and The Cavern. Soon he will be performing at the Opera House for the first time for Beige Shelter’s upcoming release party for its debut album Rumours We Make, Paths We Take. They’ve partnered with the Canadian Mental Health Association (CMHA) for the event and all ticket proceeds will go towards the charity.

Aman said he feels this is an important cause to get behind, as he himself has suffered from anxiety and depression throughout his life.

“I just want to make sure that my music makes a difference,” said Aman. “That it can help people feel that they’re not alone.”

The album release coincides with Beige Shelter’s Rumours tour, which will see them perform at venues throughout Toronto and Ontario.

Aman didn’t always see himself pursuing a career in music. He graduated from Ryerson with an engineering degree and is currently working as a reliability engineer at Bombardier. But after a recent trip to India, Aman said he had a kind of Eat, Pray, Love experience that made him realize he wants to to focus solely on music.

“I went there for an epiphany and experienced a bit of a spiritual awakening,” said Aman. “I came back and was like, ‘you know what? I want to make music full time down the road.’”

Beige Shelter began as a solo project for Aman until he met fellow band members Tom Kuczynski on bass, Karan Sabharwal on lead guitar and Neel Modi, who in addition to playing drums and keyboard, also produced their new album.

Aman said his music looks to explore all types of topics and emotions. This is where he got the name for the band. Aman sees beige as a colour that represents a collection of emotions and music as a shelter, so he felt the title fitting — though he has found some people misinterpret the name’s origin.

“It’s not because it’s three brown guys and one white guy,” Aman joked. “Totally not the reason why.”

As new artists, Aman said he’s found Toronto to be fairly welcoming — but it takes a lot of work.

“If you want to get into music, I do feel that there’s the avenue, there’s the opportunity,” said Aman. “But I feel that you have to slug at it like, pardon my French, a bitch.”

Aman says he is willing to put in the work though. He hopes someday to focus entirely on music by owning his own record label, which would manage Beige Shelter and other bands looking to make it.

“We (plan to) have other acts signed to it and we’d look after them,” said Aman. “I want to nurture and help bands spread a good message.”

Aman also plans to release a six-song EP that will put a traditional Indian twist on their folky sound. But for now, Beige Shelter will focus on its Rumours tour in the city.

Finding a winning formula for male athlete of the year