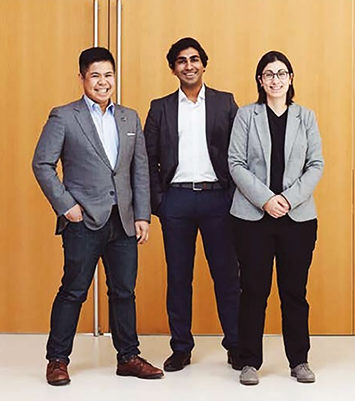 The engineering grads behind the intelliChair is taking their device to the next level with an upgrade to a smartphone app.

Two years ago, Danny Porthiyas, Raymon Atienza and Stephanie Iossifidis created the intelliChair, the prototype of a device that would allow wheelchair users to customize their control system. With it, users can plug in their choice of controller (joystick, mouthguard or sip and puff) via a USB port on the arm of a wheelchair. They then use a touch screen on the same arm to choose the setting.

The device was specifically created for people with multiple sclerosis (MS) and amyotrophic lateral sclerosis (ALS). Both are neurodegenerative diseases that affect the central nervous system of a person.

Porthiyas was working at a pastry shop when he would see customers struggling to use the traditional joystick on their power wheelchairs. “Some people would have to put a tennis ball on it,” he said.

As an engineering student, he knew he could help. He wanted to create something that would make daily travel easier for people with disabilities, even if it were just to the pastry shop.

Xavier Fernando, the group’s supervisor and chair of Ryerson’s communications lab, says a lot of research needs to be done before the intelliChair is released into the market. According to him, the next big step would be to receive feedback from different power wheelchair users. “It is more about testing the product in all different scenarios.”

No power wheelchair allows users to swap controllers using USB. Another big difference between what is currently offered in the markets and the intelliChair is the “ability to customize it where you are rather than travelling down to the clinic,” according to Iossifidis.The intelliChair can be customized in 10 minutes regardless of location.

For example, individuals in the later stages of MS or ALS have limited hand control. These people might use the device differently. 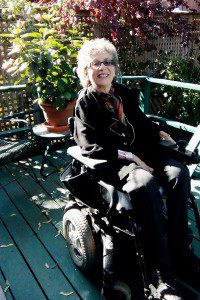 Julie Gibson started to use a power wheelchair in 2003 (Courtesy Julie Gibson).

Julie Gibson has had MS for over 50 years and started using a power wheelchair in 2003. Gibson said that her diminishing hand mobility has restricted her from operating the chair and a smartphone.

“I can’t type and I can’t turn it off and on.” She is now confined to her home.

She said that her inability to use a smartphone might be a barrier for making use of the intelliChair, but still believes the invention is a step in the right direction.

Manufacturing costs and lengthy approval processes for new products are two of the major reasons why technology for people with disabilities is so behind.

Meza said the main challenge for creating new wheelchair devices are “establishing partnerships with the manufacturers of the wheelchairs.” Many times there is little incentive for companies to innovate because they already have a product that’s been approved.

As for when the trio’s product will be released, Iossifidis said it would be a matter of taking it back to the whiteboard and laying out a business plan.

There are also many developments that still need to be made with the device itself. “If someone’s going to be using this every day, it has to be nearly perfect,” said Porthiyas.