It’s been almost 20 days since I ended #TheSoylentProject on Wednesday March 30, 2016. If you haven’t watched the final vlog wrap-up, I do have a spoiler alert to let you know that I ended the experiment early. Simply put, I ended up getting sick and am still (yes, 20 days later still) recovering. I personally think that my body was in shock by only intaking Soylent, probably combined with stress and other factors, which ultimately weakened my immune system. At the end of the day, I ended up with the good ol’ flu and have been a sad little coughing/sneezing/fever of a mess since. But thankfully, I’d say I’m 90% better now.

Back on track to #TheSoylentProject, and my overall reflection of it. Although I did end up sick, 1. I can’t totally peg that entirely on Soylent itself, and 2. My curiosity about Soylent is now fulfilled. And though I only lasted for three days, there are things I learned about Soylent that would definitely make me personally reconsider using it regularly in my diet.

The first biggie with Soylent, is if you take a look at the ingredients list, it’s not all that “wonderfully nutritious.” 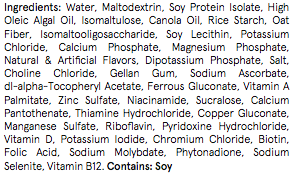 I’m definitely one who reads my food labels and tries to understand what’s in them. To be completely honest, I don’t know half the ingredients in Soylent 2.0 (that’s not to say they’re bad or good), but one ingredient that I do know and caught my eye was “Sucralose.”

What really bugged me about the Sucralose in Soylent 2.0 is that there’s 9 grams of sugar in every bottle. If you were to drink about 5 bottles a day, that’s 45 grams of added sugars (or in this case, sweeteners). According to WHO (World Health Organization), the average added sugar intake for an adult should be 25 grams per day. Soylent almost doubles that in a days worth. And to think if I had Soylent for an entire week, that would be 315 grams of added sugar! Just thinking about that makes my stomach turn.

Beyond the Sucralose, the fact that Soylent is dominantly soy protein is also something that made me realize it would not be a good nutritional option for me. Specifically for females, the intake of soy shouldn’t be consumed in excess based on the fact that it has the possibility to increase estrogen levels.

But science/ingredients aside, I also want to touch base on how I actually felt when I was consuming Soylent. To be honest, the first day I felt okay. Good, actually. I had a regular energy level and I was definitely full – but I still had an appetite, if that makes sense. As in, if you put a plate of gourmet food in front of me, actually not even gourmet, if you put a pizza in front of me, I definitely could have devoured it. There’s something not so fulfilling about drinking all your “food,” instead of physically chewing and eating it. I also found that when I drank Soylent, I chugged it because I didn’t particularly love the taste. When it was cold, it wasn’t that bad. It almost tasted like cereal milk. But when it was room temperature, it started to taste a little salty and not something I wanted to drink very much. But chugging Soylent also left me feeling bloated, and slightly uncomfortable. I also think it got into my head at how much artificial sweetener I was intaking and that started playing with my mind and placebo effect, how I felt.

Shifting to the pros, Soylent is 100% convenient. All I had to do was pop it in the fridge the day before and I was set. So much time was saved from not having to cook food and meals. And yes, it also was pretty cheap. At under $3 a bottle, you could definitely say it’s a bang for your buck.

BUT, depends on what kind of bang you’re looking for.

All in all, I personally don’t think Soylent is a product I can see students using regularly as a meal replacement, or anyone really. I can see the appeal of it maybe being a once a week type thing to replace a meal or two, but not a “living on this stuff forever,” type of substance. I think the way my body felt (ignoring the fact that I got sick…) throughout my time on Soylent made me understand that my body thrives best on actual food; food that I can chew, that has colour (vegetables!), variety and so much more. I missed food, I really did. Plus, when you’re not consuming food (or rather, not allowed to based on this experiment), you realize how much of a role food plays in the social and social media world. I would scroll through Instagram or Snapchat to kill time and all I saw everywhere was food. I went to an awards ceremony and guess what there was: food. Food is such a pivotal part of creating a sense of community, bringing people together and playing an important role in our daily lives.

I personally can’t live off of Soylent (also it’s slightly alarming that it’s named Soylent, when you think about the movie Soylent Green) and am not sure if I would try to again. But hey, that doesn’t mean you shouldn’t try a bottle of it or something for a meal one day. It could be for you, but for now, I’m sticking to my own kitchen and chewable, real food.

Thanks for following along on my journey of #TheSoylentProject, and if you have any questions, I’m just a tweet away @jasminhusain