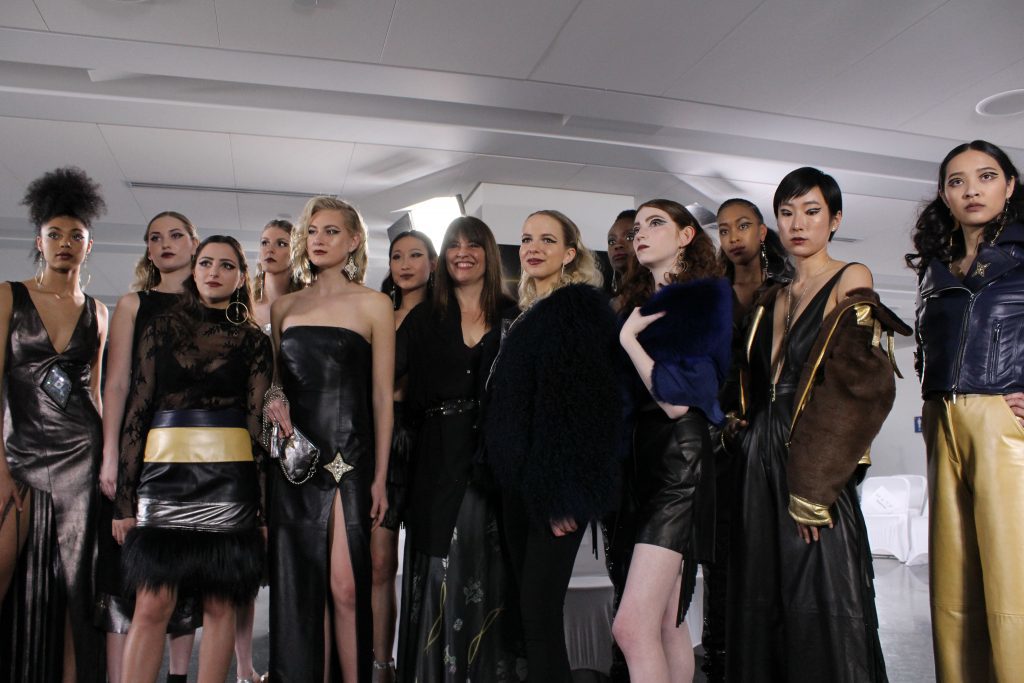 Angela DeMontigny and models pose at the Of the Stars fashion show at the Image Arts Centre on March 26. Photo by Rashmiya Ilankeswaran

Indigenous fashion is hardly in the spotlight, but that’s starting to change.

Dominated by a fast-fashion business model, the current state of the fashion industry is shrouded with overproduction and consumer overconsumption. However, with the rise of slow fashion, a movement where purchasing clothing is based off of environmentally conscious decisions and ethics, Indigenous fashion is gaining prominence.

“Fashion today is in crisis, I think. Our systems of clothing production and consumption are really environmentally destructive and socially exploitative,” said Riley Kucheran, a communication and culture student at Ryerson and a member of the Pic River First Nation.

Riley Kucheran is opening the Of the Stars fashion show with an introduction of Angela DeMontigny, her collection and emphasizing what Indigenous fashion has to offer. pic.twitter.com/0aMDnh4ub3

“You don’t really know who’s producing your clothing, for example, but (DeMontigny) is really about establishing personal connections and community,” he said. “Fashion needs to change and I think Indigenous fashion and what Angela is doing is one possible future.”

DeMontigny’s work is characterized by an integration of Indigenous themes with contemporary lines and high-end materials.

She recently presented her capsule collection at London Fashion Week in February. The collection was inspired by the ancient Anishinaabe creation story – The Seven Daughters of the Stars (Pleiades). Accordingly, DeMontigny’s designs are embellished with sun, moon and star symbols.

Her collection made its Toronto debut at Ryerson’s Image Arts Centre on March 26. Proceeds from the event will go to the Toronto Native Women’s Centre.

The fashion show, titled Of the Stars, featured leather and suede-centric designs, paired with metallic accessories and statement jewelry. A diverse set of models marched down the runway to pulsing music, sporting “classic, but edgy” ensembles.

Emma Cooper, a third-year creative industries student and a member of the Delaware First Nation, said she’s really proud that she walked the show.

“It’s not very often that Indigenous clothing is really given the platform where it hasn’t been appropriated. Usually…(Indigenous fashion) is taken for high fashion purposes; it loses all cultural value,” Cooper said.

“With this project, we actually get the cultural value back because it’s an Indigenous designer…we understand the significance behind it. It’s so much more valuable of an experience and it’s actually amazing to be a part of.”

The event was organized by the Ryerson School of Fashion, specifically by students in an event planning course taught by assistant professor Henry Navarro Delgado.

To Navarro Delgado, it was important to not only talk about diversity and inclusion as a topic, but to immerse his students in the Indigenous experience. “I think the best way to do that was to integrate Indigenous principles within the course work and then showing the work of an Indigenous designer that would close the circle,” he said.

Navarro Delgado’s students helped organize the runway show to present DeMontigny’s designs and brand to fashion goers as well as educate them about Indigenous principles in the context of fashion.

“You have ideas like slow fashion, for example, having a consciousness of protecting the environment. But Indigenous societies, Indigenous cultures, they have been the stewards of our environment…for millennia,” said Navarro Delgado.

This integration of Indigenous principles in the School of Fashion is part of a larger plan to Indigenize the school’s curriculum. Last year, as part of the introductory fashion theory course, Kucheran was hired by the school to teach a lecture about the role of clothing, colonization, cultural appropriation and Indigenous designers today.

That project has since expanded, and now they’re working to organize traditional skills workshops for the School of Fashion next year. They also hope to implement an actual course on Indigenous fashion in winter 2018 or 2019, according to Kucheran.

Kucheran is also working with DeMontigny to establish the Canadian Council of Aboriginal Design. The council would connect Indigenous designers with one another and provide them with support.