Vice journalist Sarah Hagi told journalism students Tuesday how she confronted her online trolls “face-to-face” while wearing her hijab.
Speaking at the Ryerson University school of journalism’s day-long teach-in, Hagi said she went to what she described as a pro-Islamophobia rally hosted by The Rebel news organization.
The event came to her attention when one of her colleagues posted about the rally on a social media app. Hagi then joked about attending the rally with her hijab on. She says the more she thought about the rally, the more she realized she wanted to attend. 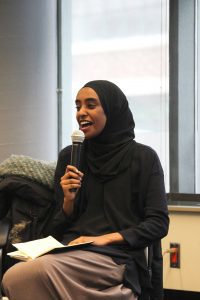 “I never really had the opportunity to confront people with those views. I get trolled online but never really came face-to-face with a person who hated me for no reason,” said Hagi.
Hagi remembers the attendees wearing ‘Make America Great Again’ hats and openly saying that they had the right to hate anybody.
“They looked like my friends’ parents — regular, middle-aged [people] to young people that are my age.
“I could just be passing these people by on the street,” said Hagi.
An article Hagi wrote on her experience received a large amount of online recognition.
Students heard her story at Ryerson on a panel called “Covering Islamophobia.” Joyce Smith, an associate professor at the university,  was also a featured panellist at the talk.
Smith and Hagi said that students shouldn’t be afraid to research what they don’t know, ask “stupid” questions, pass on stories they don’t have a lot of information on to other reporters, and form relationships with people from different communities.
“It really bothers me when we only talk to Muslims or visibly religious people about religion. So we can actually do a lot of pre-emptive work in our reporting, prior to these conflagrations,” said Smith.
Hagi said journalists need to be smart about the visuals they use in their stories.
“You can have an article of people playing hockey and a picture of Muslims playing hockey. So I think just making it normal that Muslims can do things that aren’t related to their identity is a really good thing,” said Hagi.
This article was published in the print edition of the Ryersonian on March 16, 2017.
#mediaislamophobiaJournalismRyersontoronto
0 comment
0
FacebookTwitterEmail