By: Julia Lloyd and Angela McLean

When Ryerson students fill out surveys to evaluate their instructors each semester, female faculty are often subject to a disproportionate amount of racist and sexist criticism.

RTA School of Media professor Laurie Petrou saves each comment she receives, then uses them to shape future courses.

She said some of what she reads seems to be in response to her gender, citing one comment in particular: “Laurie acts like your best friend and then when you have the slightest issue with handing things in or a problem arises with a test, she is very hostile and never tries to help any student regardless (of her saying) she is available to talk.”

Reflecting on the comments, Petrou said, “that is using language I presume wouldn’t be used (toward) a male prof. Not the first time I’ve been accused of ‘acting like your best friend’ then changing my tack.”

These comments can cross the line into harassment.

“When I was a fairly new and younger professor, I dealt with a lot of sexual harassment from students — in surveys, on Rate My Professor, (and) on Twitter,” Petrou said. 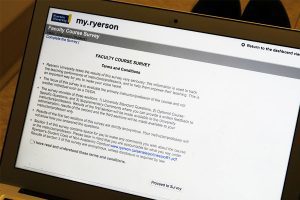 Ryerson students must agree to the university’s terms and conditions before taking the faculty course surveys. (Photo by Angela McLean)

Faculty course surveys provide an opportunity for students to turn the tables and grade their instructors on criteria like knowledge, enthusiasm, class organization and treatment of students.

The fall semester surveys were made available to Ryerson students starting Nov. 10.

These surveys are used by the university to encourage constructive criticism — but that’s not always what they get.

A female Ryerson instructor who teaches a sexuality and gender course in the sociology department spoke to the Ryersonian on the condition of anonymity.

She said that being a woman, and a woman of colour, she was aware going in that some students might think she couldn’t teach that subject without bias.

She’s far from the only instructor or professor to be the subject of similar stereotypes and labels.

And if it’s not bias, it’s something else.

Faculty receive comments like “She’s too nice, but not nice enough.” Or they may be called things like a “bitch,” bossy or someone who picks favourites.

Saeed Zolfaghari, vice-provost of faculty affairs, said his office is aware of the gender and racial bias on faculty course surveys.

They’re working to address  these concerns, he says, with the Office of Equity and Community Inclusion, the Ryerson Faculty Association (RFA) and CUPE 3904, the union representing contract instructors at Ryerson university.

“If concerns about inappropriate student responses are brought to the university’s attention by an instructor, the university would assess to determine if university policies have been violated and then determine the appropriate action, within the limits imposed by the responses being anonymous,” Zolfaghari said in an emailed statement.

“We would also provide some education to students to ensure they understand the importance of their feedback, but also the need to provide feedback in a constructive, respectful and appropriate manner.”

The RFA has been openly critical of faculty course surveys.

Ian Sakinofsky, negotiating chair, wrote in their fall 2016 report that their concerns have to deal with “how the survey is administered, the manner in which survey responses are summarized, distributed and interpreted, and the use that is made of this data.”

RFA executives did not respond to multiple requests for additional comment.

The problem of sexist and racist faculty surveys isn’t limited to Ryerson, or Canada.

A 2014 study conducted by a group of researchers from North Carolina State University examined the relationship between an instructor’s gender and their student feedback.

Researchers swapped the names of two online teaching assistants, one male and one female.

Both gave similar feedback to students and returned assignments at the same time, yet the male identity scored significantly higher.

“There’s a lot more racial biases and sexism in academia than I think most people are willing to talk about,” Andrea Eidinger, a sessional instructor based in British Columbia, said.

Eidinger, who wrote a blog post on the topic earlier this year, sometimes shares class notes with her husband, a fellow instructor. The pair teach similar subjects.

“He, I don’t think, has ever been criticized for talking about women too much or about feminism, whereas I routinely get at least one comment per course about that,” Eidinger said.

But if not faculty course surveys, what’s the alternative?

Peer review, which is frequently used with pre-tenure faculty, lets professors evaluate other faculty members. That comes with its own issues, Eidinger said.

Another problem lies in the fact students don’t always recognize their gender biases.

Third-year journalism student Aidan Lising attributed some of the gender bias amongst students to media representations of the school system.

“Caucasian male professors are (often who) you see on TV and movies … coming in with a turtleneck and suede elbow patches,” Lising said.

“But when you come to a campus like Ryerson and you get more female professors and professors of colour, it could be a bit jarring (for some students).”

But according to Eidinger the problem in these comments is much more than just perception. Faculty course surveys have become an important tool for hiring practices, and she says males move up to the top of the list come promotion time in part because of their higher scores.

“(It is) not necessarily because they are better teachers than I am but because they happen to be male,” Eidinger said. “That’s just not acceptable.”

Despite the biases, many professors and instructors don’t want to do away with faculty course surveys.

Petrou, for example, remembers and appreciates the constructive comments she receives.

“This is my second class with Laurie, and I enjoyed this class (more) than my previous one. Some of the readings are a little hard to understand, however Laurie broke them down and explained in class,” one student wrote on their survey.

“That reassured me that breaking down the reading content is not repetitive but helpful,” Petrou said.

“I think that some students (just) have a gender bias, a racial bias, or a homophobic or transphobic bias, (and) we can’t generalize Ryerson students,” criminology professor Anke Allspach said. While she has received some comments with an “infantilizing and objectifying undertone,” most of her comments have been positive.

“Students somehow need a venue to give feedback (and) professors need to be held accountable for their teaching and how they treat students.”