This version includes a photo gallery of Millie Yates’ collection featured at this year’s Mass Exodus.

It’s Saturday afternoon at the Daniels Spectrum centre on Dundas Street East. Millie Yates, a Ryerson fashion design student, is beaming and full of smiles amongst a crowd of family and friends. Her debut collection, SCYTHE, was just shown on the runway at 2017’s Mass Exodus. In between congratulations and elated chattering, she says: “I’m really excited with how the show went, I’m super excited with the models I had … everything was beautiful and stunning as well.”

Each year, senior fashion design students are given the opportunity to showcase the fruit of their labour from their final year — a collection created entirely by themselves. Yates is a graduating fourth-year who says that “the pinnacle of the four years is participating in [Mass Exodus]. 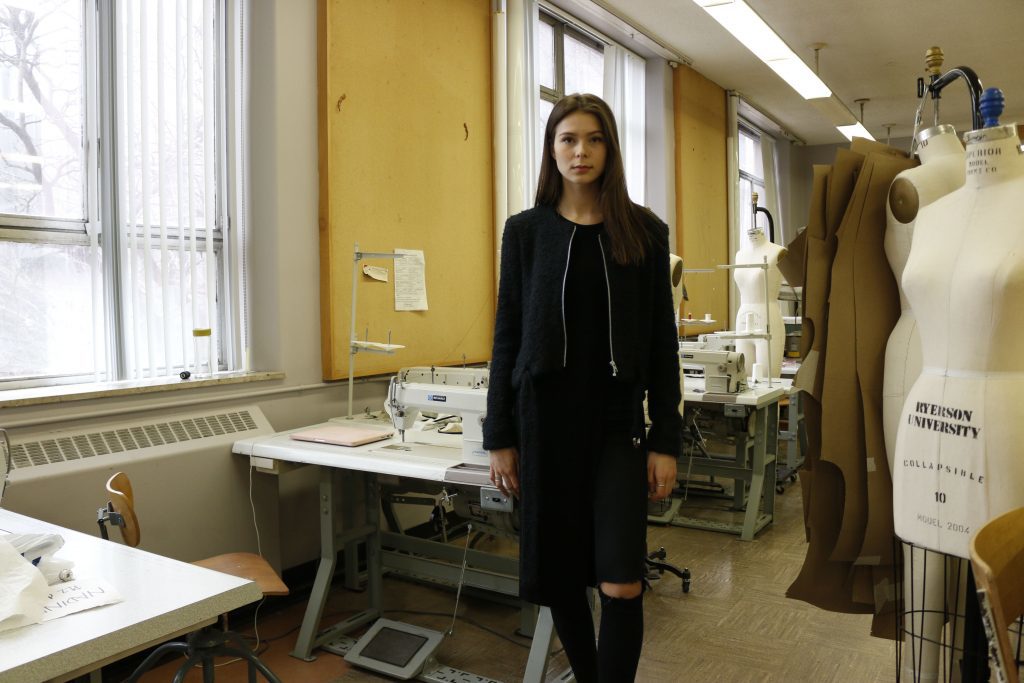 “It’s a nice kind of thing to tie everything together … it really helps too, for my parents, who aren’t involved in the world of fashion, to see my clothes on a runway. It really helps them understand what I’ve done and put together.”

Yates is originally from Peterborough, Ont., where she says a fashion presence is limited. Besides some close friends who were mildly interested in fashion, her pursuit of the career has been mostly independent. Beginning with sewing lessons in Grade 2, Yates’ love for fashion and design continued to grow throughout the years.

Though sewing took the back burner for a while during her high school studies, she decided to take a leap of faith and apply to Ryerson’s fashion design program as her first choice because, “It’s something I’m passionate about, it’s something I’ve always wanted to do.” She applied to other universities as well, mainly to English programs like comparative literature, but said, “If I get into Ryerson, I’ll go [for fashion].”

Four years later, Yates has already secured a job with Abercrombie & Fitch after interning there last summer, with help and guidance from her program.

Caron Phinney, a fashion technology instructor at Ryerson, says that the company typically picks the best students. “Millie received that contract because all around, she’s a fantastic student. She’s very dedicated to her work, she’s really able to pick up new concepts as well.” 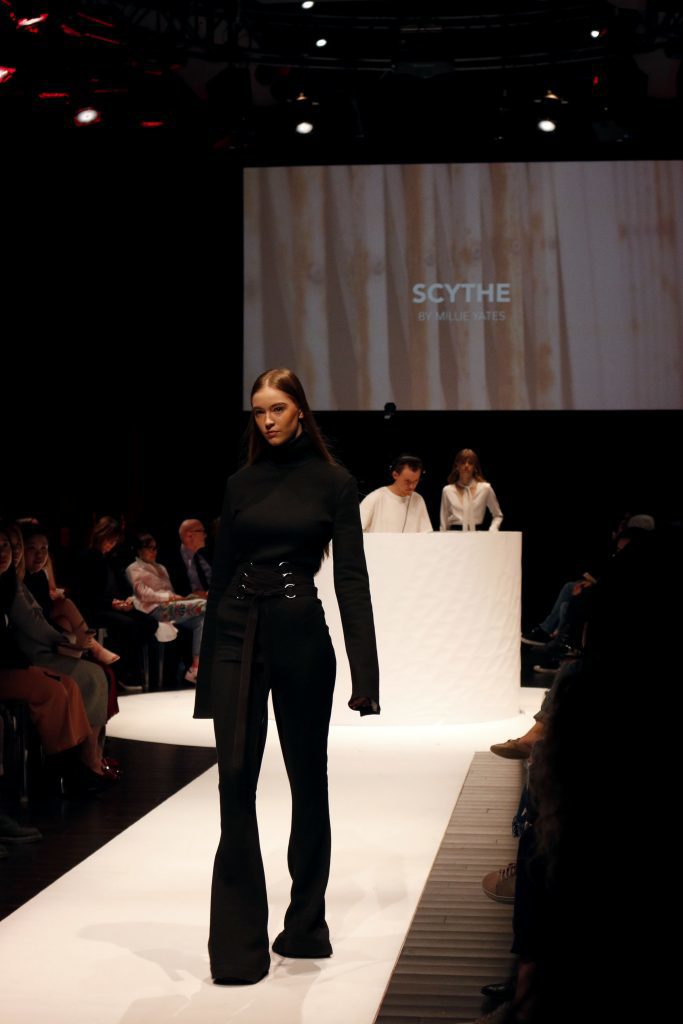 A few of the pieces from Millie Yates’s collection, SCYTHE. (Julia Ho/Ryersonian Staff)

For Phinney, it was apparent how close to home Millie’s inspirations were drawn from. “That’s really Millie on the runway. It represents who she is to a T in terms of the technique that she used, how cohesive she is. It was just kind of her final expression after her four years … I thought it was fantastic.”

Yates credits much of her success to Ryerson, and says the school provides an advantage over some other schools because of its in-depth study of design technology. “It’s a great feeling being able to come to school and love what you do every single day, and ultimately, I’m really glad I picked Ryerson … I think I would’ve enjoyed the other programs, but I’m not sure I would’ve felt that same passion about what I do.”

But perhaps fashion and literature aren’t so unrelated for the young designer. The inspiration behind SCYTHE comes from Alfred Tennyson’s poem, The Lady of Shalott. Yates says, “There’s this line that particularly informed the direction of my collection, where she says, ‘I’m half sick of shadows.’ So she’s somewhat comfortable staying where she is. She likes her life, but she’s also tempted by the outside world and what else is out there, and I like this tension between the known and the unknown, and that’s what I play on in my collection a little bit.”

A predominantly black and white collection, Yates uses that as a play on lightness and darkness, aligning with the theme of shadows that runs throughout the poem. She further expands on this motif through pleating and the illusion of depth with slits and long-flowing details.

Her use of juxtaposition doesn’t stop there. Also inspired by pre-Raphaelite artist John William Waterhouse’s painting of the same poem, Yates looked to the soft and romantic style of the art, combining hard and soft edges. “You’ll see I’ve got silk linings, but also metal details in my collection as well.”

The collection, which consists of eight pieces and five looks, includes co-ordinated separates, with pinstripe being the main pattern of the fabric, in conjunction with various natural textiles, such as cotton, silk and wool. And as for the name? Yates says she liked how the word “scythe” fit in with her theme. As an agricultural tool for reaping crops, she liked the contrast of a soft-sounding word that describes a hard blade. 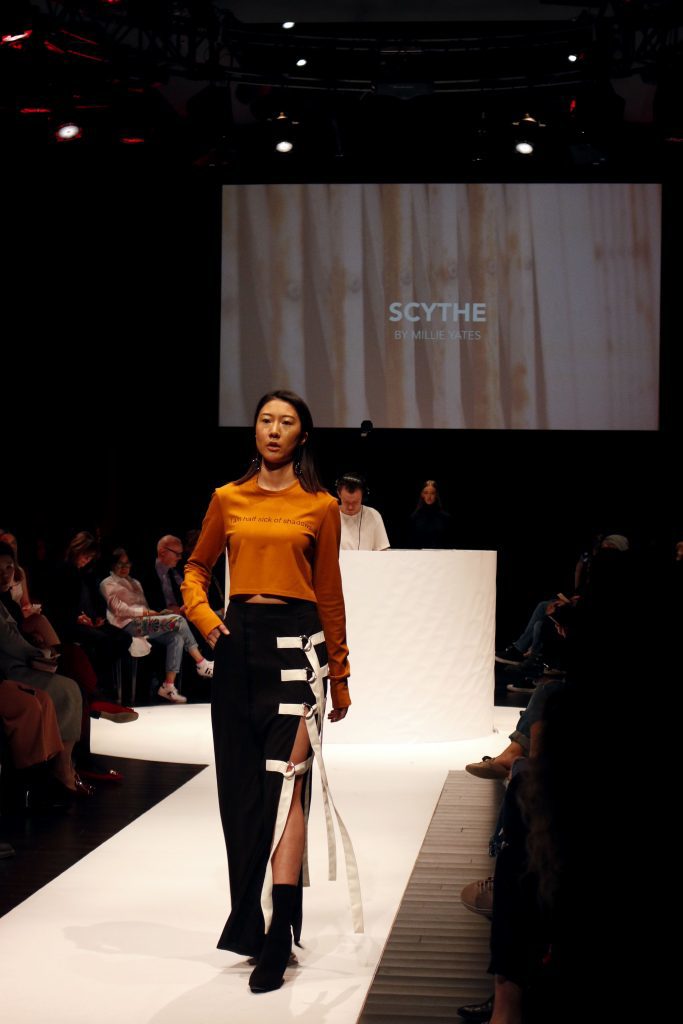 But the collection is designed for a niche market — tall women. “It was something I decided to do because, being a tall woman myself — I’m five-eleven — there’s really nothing out there for me that fits my body really well. Tallness is something that people don’t really look at as a disadvantage in any way when it comes to shopping.”

She adds that she often gets comments like, “Oh, clothes look so great on you, it creates such great lines.” Her response: “While that is true, women still need to look professional in the workforce. They need to have hem lengths that are suitable for their job.”

Her frustrations come from personal struggles with clothes, where, for example, her back becomes exposed from bending over because blouses are too short for her. “I’m raising my arms above my head, and suddenly my stomach is exposed … so I’ve made adjustments in my patterns for things like that.”

For Yates, it’s all about being comfortably professional. Her goal for the brand is to make shopping for tall women just as easy and accessible as it is for anyone else. “It’s just clothes, but it’s clothes that are going to fit a tall woman really well … Right now on the market, there’s Long Tall Sally. That’s pretty much it in Canada.”

Yates has been working on her collection since last summer, where she was constantly sketching and “getting out all those bad ideas.” However, despite it seeming like these students have an abundance of time to work on their collections, Yates said all the muslins (essentially a prototype) for each piece have to be made and completed within a one-week span during their fall term. Time constraints such as these give just a small taste of the pressures fourth-year fashion design students face, especially given the fact that Yates says she typically spent a total of about 30 hours on each individual garment.

With so much effort put into this collection, Yates hopes that she’ll be able to sell some of her pieces to be worn in editorial work, although she does not plan on showing the collection in another show or mass producing her products. Her reason behind it is simple: fashion is tricky, and trends fade.

“Keeping that in mind, I’ll also be working on creating pieces after I graduate. This is not my last collection … And you do have to keep up. My collection is contemporary women’s wear; it is intended to be worn, it’s not art-to-wear.”

For now, Yates’ focus is on continuing to design in her free time, even after she graduates and moves to Ohio to begin working for Abercrombie & Fitch. Having also previously dabbled in modelling, the designer has stepped back from that to hone in on her main goal: “To be taken seriously as a fashion design student.”

Check out our gallery of photos below: