Gender is the single largest factor in whether undergraduate students run for school elections, according to a recent report from the University of Alberta.

The study, named Identity Matters! found that women are just as interested in student politics as men, but are far less likely to actually run.

Shane Scott, the vice-president academic for the University of Alberta Students’ Union and co-analyst of the study, said that women or those who identify as women cited a lack of confidence as the reason deterring them from running for positions. 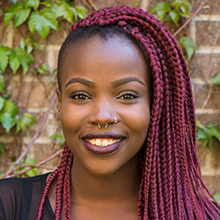 RSU president Susanne Nyaga says many people were quick to undermine women during her experience on the campaign trail. (Photo courtesy of the RSU website)

According to the report, between 2005 and 2016, women on average held 30 per cent of student council seats at the University of Alberta, even though they make up over half of the student population.

At Ryerson, female students have their place in student politics. Over the past 17 years, there have been seven female Ryerson Students’ Union (RSU) presidents. But Ryerson female politicians say that these problems are still persistent.

Susanne Nyaga, the current RSU president, said Ryerson is not exempt from these issues.

“Unfortunately, we live on a campus that perpetuates the similar oppression we see out in society, so patriarchy does exist here, misogyny does exist here and because of that you will see less femme [feminine] folks in politics than you will masc [masculine] folks, and that’s just the reality,” Nyaga said.

During her experience on the campaign trail, Nyaga said many people were quick to undermine females.

“When I saw that all the other folks running for president were males, of course there’s an interesting dynamic there,” Nyaga said.

“Going into debates, you saw them giving more respect to the VP’s that I was running with that were male before they give respect to me. You saw more conversations happening amongst the men before they’d even acknowledge that I was there,” she added.

Besides the campaign, the struggle for women still exists after being elected into the job.

Serena Kwok, a former FCAD director for the RSU, said there is pressure to prove herself because of society’s patriarchal perception of women.

“There was one male that was kind of rude and I knew that if I wasn’t there, if there was a male there, he wouldn’t be like that,” she said.

According to the report, race is another factor affecting student politicians during the job.

Kwok said she had to go the extra mile just to keep up with her male counterparts.

“With my campaigning, it shocked me when… I was standing with another guy and I noticed that people… were going to him more. He was getting more interest and people were just listening to him. I was working just as hard as him,” she said.

Kwok said she had to try much harder just to get equal attention.

Nyaga had similar experiences as the first black female elected into the top position of the RSU, saying it is just a reality of the job.

“When it’s a femme person in this position, often times what you’re going to see is a lot more of the grunt work being put on you, but then a lot of the glory work being taken from you,” Nyaga said.

The University of Alberta has started a program called Stride, which empowers women and non-binary folks to participate in student politics.

With Ryerson’s perceived diversity in student government, the need may not be to empower women and minorities to run for the position but to make their experiences on the campaign trail and in their jobs more inclusive.

Alleged assault at Ram in the Rye leaves student with broken eye-socket, nose