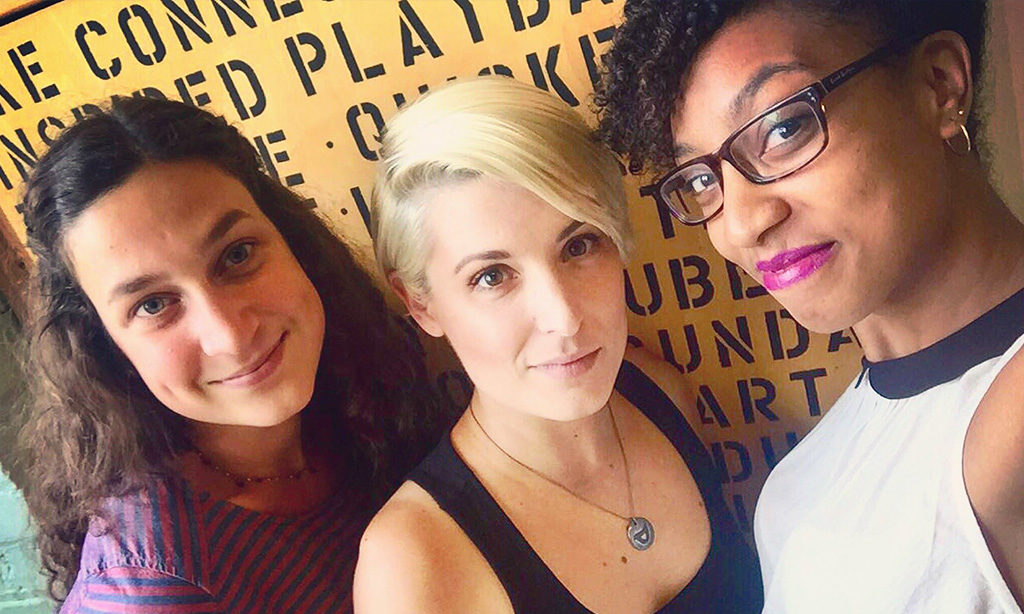 There is now an all-womyn theatre company in Toronto.

HERstory Counts is a theatre company that produces plays, which are written and performed by diverse female-identified womyn. Female-identified means any person who identifies themselves as a womyn.

Jennifer Neales, the founder of HERstory Counts says, this company is not only important, it’s necessary.

“HERstory Counts became the necessary thing that had to happen because so many female artists I knew, were watching Toronto theatre … that were not from the voice of a womyn or a diverse female,” said Neales.

HERstory Counts spells woman with a y, rather than the traditional way. “Using a Y is due to the etymology of the word womAn: the word is derived from wyfman, the combination of wyf (wife) and man,” Neales explained through email.

Other members of the HERstory Counts company think there needs to be more diversity on stage, especially among womyn.

Lack of diversity on stage

Current third-year theatre production student Jenna Borsato agrees. She joined this company because she wanted to bring more diversity to the Toronto stage.

“There’s a lack of representation in theatre and lack of diversity. It’s primarily white females in the theatre, which I think is a poor representation. It isn’t accurate of all womyn in the world,” said Borsato.

So Borsato joined this company to make a platform for womyn of all ages, ethnicities and sizes.

Neales said that most shows on main stages in Toronto are stories being directed and written by men. “That’s a specific lens to see the world through. It’s important to have diversity of perspective.”

Each performance will tell a personal story of the performer’s experience of being silenced. Some will be told in a poetry format, others with the use of sound, and some as more of an interactive experience.

The company and the production of SILENCED hopes to break down preconceived perceptions about female relationships, said Borsato.

“There is a preconceived notion that womyn should hate each other. It’s important to see that womyn will support you and love you and care for you,” she said. And that’s what HERstory Counts and SILENCED does, she continued.

HERstory Counts is a platform for all womyn to perform their stories and experiences on stage. But, the company is hoping to branch out and accept plays written by womyn.

It’s not determined when this will happen. But, when it does, who will play the male characters, if there are any?

“I really want to focus on having a female creative team and producing team. But, we are not opposed in having men help at all. We will see if the play involves a man … I think it depends on the piece,” said Borsato.

Neales has more to say on the topic. “I can see us accepting scripts that also accept male roles,” she said. If those roles are played by males then they will have to be men who identify as feminists. “Ideally, the men we audition will come recommended by other womyn directors and casting agents.”

The future of HERstory Counts

Looking into the future of the company, Borsato said it will speak for all womyn and all people from marginalized groups, including people with disabilities.

She said that people in wheelchairs and deaf actors are rarely seen on stage, but they are great at what they do. She wants to make sure that all voices get a platform to express their talent.

Other members of HERstory Counts and SILENCED

Neales and Borsato created this company with their friend Evangelia Kambites. But Borsato isn’t the only Ryerson student involved with the SILENCED production. Third-year theatre production student Maya Findlay is the assistant stage manager of the production. And Caitlin Cooke, a Ryerson grad, is the stage manager.

Neales says this company and SILENCED is their way of making social change. “If the only way is to do it through our art then that’s what we will do.”

SILENCED will hit The Red Sandcastle Theatre stage from Dec. 8-11.

Tickets will be available at the door the day of the show or in advance at the brown paper tickets website.