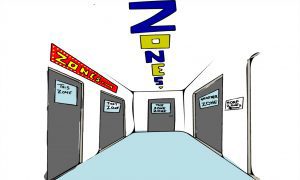 “I don’t want to know how much of my nearly $11,000 annual tuition goes to these Zones.” (Illustration by Brooke Taylor)

As the famous philosopher Kanye West once said, “don’t let me get in my zone.” More like “Ryerson won’t let me get into the zones.” In a school hard-pressed for space, why are we constantly giving it up to outside groups?

Darrick V. Heyd, senior adviser for academic space planning, said space on Ryerson is limited by campus location and therefore it’s a challenge to give space to breastfeeding parents.

Yet, we have 11 Zones. Seriously, 11. I don’t think I’ve spoke to a single person who understands the Zones. How do you become part of Zone Learning? Honestly, I don’t get it. You have to have a startup plan, maybe. Or, maybe not. It’s not entirely clear.

How can Ryerson accommodate these Zones while telling student-parents and other groups that “woops, sorry, no space for that”? My understanding is most of Ryerson’s Zones hire staff from outside of the university.

Wouldn’t it make more sense for our university to cater to the students who pay for these Zones in the first place? I don’t want to know how much of my nearly $11,000 annual tuition goes to these Zones. Did I mention the overcrowding in classrooms?

I got lost in the SLC the other day and happened upon a Zone. It was midday and there were three people occupying the rather large space, despite the “space crunch” Ryerson suffers from.

It’s the Student Learning Centre for God’s sake. Give it to the students.

That is some prime real estate. Now, maybe I’m just jealous that I’m not in one of these exclusive clubs.  I don’t think I am, but I know I’m jealous that these weird Zones get priority over every other student space in the university.

In a previous article, I wrote that finding a private and quiet space to breastfeed (to be clear, I am not a parent) was nearly impossible. Yet, we have but ONE designated breastfeeding space?  It’s in the RSU building, the door is locked and if no one is working, tough noogies.

The new Daphne Cockwell Health Sciences Complex will have a designated breastfeeding space. So, when that is finished being built in 2018, we’ll have two.

Ryerson offers students just one prayer room and it takes a lot of sifting through Ryerson’s many websites to find it.  But, we have 11 Zones, so I guess that’s fine.

I am not a student at Ryerson but I have no idea what you are trying to say in this article. What is a ‘zone’? What sort of ‘outside group’ gets priority in your school?