He would control Tofi using emotional blackmail, make her believe he couldn’t help the way he acted and tell her that it was her fault for choosing to stay with him. He would tell her how much he loved her one moment, and then raise his fist the next, telling her she was lucky he drew the line at hitting.

Fifty Shades of Grey has surpassed Harry Potter as the fastest selling paperback of all time. (Illustration by Hana Shafi / Ryersonian Staff)

Tofi says there is a striking resemblance between the forms of abuse she endured and the behaviour Christian Grey exhibits to main character Ana Steele throughout the books (Fifty Shades of Grey is the first installment of the trilogy). Grey keeps tabs on Ana by tracking her phone, belittles her concerns about their relationship and emotionally manipulates her by justifying his erratic behaviour with the fact that he was abused as a child. Ana asks him not to interfere with her career – but he does just that, buying the company she works for and threatening to buy whichever company she may move to.

After Ana breaks up with Christian, he turns up uninvited at her apartment and initiates sex without her consent.

“‘No,’ I protest, trying to kick him off.
He stops.
‘If you struggle, I’ll tie your feet, too. If you make a noise, Anastasia, I will gag you. Keep quiet. Katherine is probably outside listening right now.’ (192)
I readjust my bra as he pulls down the duvet and quilt over me. I stare up at him completely dazed, and he smirks down at me.
‘That was really nice,’ I whisper, smiling coyly.” (196)

“Because Ana said ‘that was nice’ afterwards, we’re supposed to be OK with the fact that Christian was told ‘no’ and continued anyway, using threats to ensure he got what he wanted,” says Tofi.
After two years, Tofi found the courage to leave her abuser – despite being broken and suicidal.

But Ana marries hers.

“It makes me disgusted to see a relationship with a man like that being sold as a love story,” Tofi says. “It’s not – it’s life-destroying.”

Fast forward to Oct. 13, 2014. Beloved radio personality Jian Ghomeshi posts an open letter on Facebook regarding allegations of abuse. In it, he says:

Ironically, adamant feminist icon Beyoncé recorded the theme song for the Fifty Shades of Grey movie: a slowed down version of her smash hit “Crazy in Love”. The film is set for release on Valentine’s Day 2015.

One study published in the Journal of Women’s Health found that women who read Fifty Shades of Grey were more likely to have an abusive partner.

But more often than not, abuse of this nature goes unreported. Only six per cent of sexual assault cases are reported to the police, according to SexAssault Canada, a website that aggregates the numbers of various studies from across the country.

Ryerson sociology professor Doreen Fumia says there are three main reasons why sexual assault often goes unreported. First, the feeling of shame that survivors develop. Second, the stigma surrounding open discussion of sexual assault. And third, the fear that no one will believe them.

But SexAssault Canada’s statistics show that false reports make up only two to four per cent of all sexual assault cases.

“If there’s been a silver lining to the whole Ghomeshi debacle, it’s that we’re talking about (unreported abuse) more,” Fumia says.

After Tofi opened up about her experience with abuse, it took over a year and a half of counselling and support from an abuse charity before she truly believed that what happened wasn’t her fault. She says she was so manipulated that probably half her recovery time was coming to terms with the fact that it was abuse in the first place.

The experience inspired her to co-run the @50shadesabuse account on Twitter, which aims to “raise awareness that the Fifty Shades of Grey series romanticizes domestic abuse.”
The account has been blocked by the author of Fifty Shades of Grey, E.L. James, who claims that likening her novels to abuse is doing “a disservice” to the many women who have experienced it in real life.

“What I read in E.L. James’s books was a perfect description of my abusive ex, dressed up as a ‘hero,’” Tofi says. “I’m not doing myself a disservice – I’m refusing to accept abuse as love in fiction.”

Tofi’s not asking for the books to be banned, but for the author to call it what it is: abuse.

“It’s very important to distinguish reality from fantasy,” Tofi says. “If a man is stalking you, controlling you against your will, threatening you and manipulating you, this is not a sign of love. It’s abuse.”

While Fifty Shades of Grey may boast a fictional plot, the potential it has to sway the public is very much real.

Tofi says: “When we romanticize abuse in fiction, we run the risk of making it harder to spot in reality.” 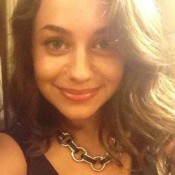