Last week, the Ryersonian reported on a group of Ryerson students whose short film on the city of Niagara Falls was making the rounds on social media.

The film, titled As Niagara Falls, was made in connection with the university’s School of Image Arts. It questions if the mainstream portrayal of the city as a tourist hub is a truly accurate depiction of the everyday lives of its residents. The film shows families with little children — the lights from the nearby fair stalls reflecting off their cheeks — answering questions about what they like most about the city.

Subjects are then asked about the residential and local areas around the tourist attractions, but many seem to be speechless.

The film continues with images of abandoned warehouses, run-down infrastructure, billboards of rental properties, debris and graffiti-ridden gyms and buildings.

As reported by the Ryersonian, Ryerson’s president Mohamed Lachemi apologized to Jim Diodati, mayor of Niagara Falls, for the use of the university’s logo at the end of the video. 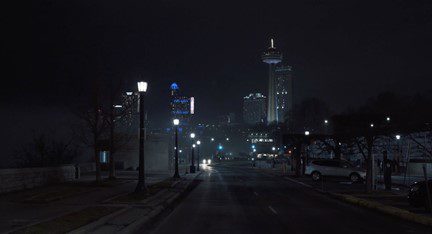 A screengrab from the short film, As Niagara Falls. (Courtesy Mayday Pictures)

As a student-run publication, we at the Ryersonian feel it is necessary to note that the students behind the documentary are just that: documentarians.

They should not be attacked for what they produce, because the ultimate goal – in our perspective as both journalists and content creators – with works of art based in reality is to promote conversation around what is being addressed.

Instead, we should appreciate students who are able to bring what some consider a contentious issue to the forefront. As stated in one of our earlier editorials, we must respect the institutions that allow such discourse to exist in the public domain.

There is no doubt that our own newsroom has had its fair share of being on the receiving end of criticism, whether it be from students, faculty or the university administration. And this isn’t just for this session’s masthead – we’re sure it’s something that every masthead has faced at one point or another, to a certain extent.

Time and time again, we continue to see that the power of dialogue is too easily overlooked. But doing so is dangerous and harmful in that it shuts down the possibility of discussion on what could be done better.

Roses are green, violets are purple?