Gould Street was freshly painted just a year ago. The paint began to peel immediately to the point that Ryerson has recently asked the city to repave the road. (David Chen and file photo/Ryersonian)

Ryerson quietly announced Friday that the city will be repaving the $195,000 paint jobs on Gould and Victoria Streets.

“There was a lot of good criticism of spending money on it. So rather than us spending (the) money…we wanted the city just to put it as part of their normal street improvements.”

According to media relations manager Michael Forbes, the resurfacing project should begin within a month.

Alina Bykova, a second-year journalism student, isn’t thrilled about the news. She says the repaving will just make it more inconvenient for students.

“They’re probably going to shut the road down which is just going to cause more traffic,” says Bykova. “It’s just going to be a big hassle, they should have just left it. If anything, they should be investing in more tables for people to sit instead of painting the road with colour that nobody cares about.”

Third-year politics major Brandon Lynch says it’s a joke that the city is now on the hook for Ryeron’s mistake. He agrees with Bykova, saying the road isn’t even the issue with the campus.

“We could use more seats, we could use more lighting around here,” says Lynch. “It’s especially dark for people coming for nighttime classes. Clean the place up, make it brighter, safer and less of an offshoot of Yonge Street.”

It has been a year since the university commissioned two paint jobs totalling $195,000 to freshen up the main corridors of Ryerson’s campus. An initial $25,000 coat of yellow paint was rushed onto the pavement in time for the start of the 2013 school year.

A more permanent epoxy paint — the same type used in New York’s Times Square — was applied a month later at a price tag of $170,000.  Despite the claim that the epoxy paint was more durable, it immediately began to peel because it didn’t stick well with the first layer.

This prompted Ryerson’s vice president of administration, Julia Hanisberg, to write a lengthy blog in January titled: “I’m Sorry.” In it she outlined what went wrong with the expensive project, and cited time restraints as the major factor. Phase one was rushed because the school wanted it done in time for September, but phase two was rushed as well. The school had a very small window to apply the second layer before colder weather set in.

The school’s administration emphasized that they’ve contested the resurfacing contract, and didn’t pay the whole $195,000. They haven’t released the final figure on the paint jobs, but Levy confirmed that the $25,000 for phase one was paid in full.

Much like the failed paint jobs, the repaving is described as a temporary measure. Levy said a more permanent landscaping project is the hope for the Gould Street corridor in the future, but that won’t be in the works until the new Student Learning Centre is built in 2015.

“The budget (for the landscaping project) would not likely go to the board until sometime next year at this time,” he said. “So you’re looking at probably 2016.” 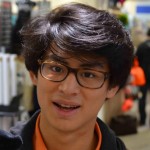 At a glance: tuition on the rise