Former image arts student builds a life out of lego

The tiny Lego bricks that coloured most people’s childhoods are designed to make virtually anything. In the case of a former School of Image Arts student, they made his career.

Dylan Woodley’s game is stop-motion animation: making seamless movement out of Lego bricks one frame at a time. The 22-year-old has made videos seen by millions of people, including the official Lego remake of Ed Sheeran’s hit song Lego House, as well as his versions of Coldplay’s Viva la Vida and Foster the People’s Houdini. 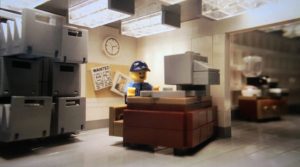 But before the viral videos, and before attending Ryerson, Woodley was just a kid with a table full of Lego and his dad’s old camera.

“I was always playing with Lego, doing cool things, making robots and making big spaceships, and everything that a kid likes to do with them. And, I was also making videos with my siblings,” he said. “[I] found that there was something called stop-motion animation, and I could put these two worlds together and make my own videos. And that grew as a hobby, into a passion, into a profession.”

He started making stop-motion videos at 12 years old. As both his passion and skill level grew, so did his workspace. He gradually moved from the corner of his Stratford, Ont. bedroom to his parents’ basement, and more recently to his own studio in Toronto with his over 150,000 Lego bricks in tow.

Making just one minute of stop-motion is a tireless process that involves assembling the sets, props and figures needed, and then slowly creating each movement frame by frame. From there, Woodley edits the still photos together and adds special effects that couldn’t be accomplished through Lego alone, totalling in hundreds of hours of work and roughly 60 hours of editing.

In 2012, his version of Houdini by Foster the People went viral and caught the attention of Warner Bros. music. Still in Grade 12 at the time, Woodley was hired to create a shot-for-shot remake of Ed Sheeran’s Lego House music video.

“They said Ed saw (Houdini) and he’s always wanted the song Lego House to have a Lego music video, but the studio always said, ‘No, it’d cost too much money, it’d take too much time,’” Woodley said. “But they found this 17-year-old kid who worked out of his parents’ basement and that was the perfect opportunity.”

Woodley created the roughly four-minute video over the course of 50 days, and then watched the YouTube views skyrocket. To date, it’s been seen 7.5 million times. 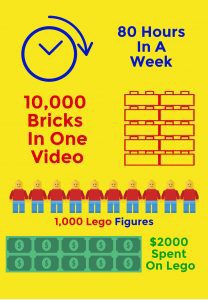 “It was a snow day, the day it came out,” he said. “So I just got to sit in bed and watch the online reaction come in. That immediate response was such strong fuel for a young creator, to see positive reactions immediately following the work.”

Riding that wave of success, Woodley attended the Image Arts film program after seeing a Ryerson student’s thesis film at his high school.

“I figured (film school) would allow me to expand my horizons, break out of the stop-motion world into some live-action and get a taste of what else is out there.”

Though live-action filmmaking is still something he’d like to try, what he found at Ryerson instead was a reinforcement of the work he’d already been doing.

“This kind of ethereal world of imagination that I’m always playing in is much more suited to the various animated mediums. Live-action has a place in that, but only supplementary to my creativity.”

He stayed at Ryerson for two years before leaving to focus on larger projects, including collaborations with the Lego Group themselves.

But with hundreds of thousands of bricks, a simple tripod and a DSLR camera, Woodley’s work is still, at its core, assembling the Lego bricks he’d play with as a kid.

“It’s painful and tiring,” he said with a smile. “But with every new frame that’s made, the action starts to reveal itself, and the scene comes alive. And there’s nothing more exciting than being a part of that kind of lucid process.”