The first rule of running a successful fundraising campaign: get 6ix Dad Norm Kelly involved. Three Toronto friends did and their hotline has been blinging ever since.

Gary Liang, Tom Guo and Emerson Lai decided they wanted to give back to the community, so last week they started “We The Norm,” a non-profit organization that sells Norm Kelly, Drake and Toronto-inspired T-shirts and donates all proceeds to children’s charities like SickKids Foundation and Covenant House.

The name was inspired by Toronto city councillor Norm Kelly and #WeTheNorth — the slogan made popular by the Raptors’ playoff run last season.

“We were looking for people who really represent the city, and Norm and Drake immediately popped into our heads,” said Guo.

We The Norm founders with Norm Kelly: (from left to right) Emerson Lai, Gary Liang and Tom Guo. (Courtesy Twitter)

Kelly gained a lot of attention when he took over Rob Ford’s mayoral duties in 2013. His recent Twitter “beef” with rapper Meek Mill and his friendship with Drake have earned him a cult following.

“(Norm) portrays a character that is not very stereotypical of a political figure,” said Guo. “He’s the father figure of the city. He’s still hip. He’s got an aura around him that makes him so lovable.”

The three founders met with Kelly and pitched their idea to him a few weeks ago. Kelly tweeted a photo of the group wearing the T-shirts last Thursday. Since then, the picture has received hundreds of retweets and likes, bringing traffic to the organization’s website.

We The Norm’s Twitter account adds followers every hour. What started off as a small side project seems to have turned into a big hit overnight — all thanks to Kelly’s celebrity status.

“It’s only the early days right now but it’s been doing quite well,” said Liang, who worked as a summer research assistant for the councillor in 2007. “Much better than we had anticipated.”

Guo said his team knew Kelly was popular but were surprised at just how popular. “We really thought councillor Kelly was a local hero, but apparently he has an international fame as well.”

The shirts cost $20 and come in small to extra-large sizes. One of the shirts features the phrase “We The Norm” in white print. The others reference the Drake-Kelly collaboration at Ryerson’s 2015 frosh week.

Lai, We The Norm’s lead designer, said the friends have plans to expand the line in the future. “We want to keep this going so what we’ve decided to do is hopefully come up with new designs or branch out to other products.

“We were thinking that maybe every two or three weeks we’d come up with something new.”

Liang added, “There have been quite a few different requests for different merchandise and we’re definitely looking into that.”

Guo said the first orders were shipped out to buyers Monday.

Liang said the group is in talks with Kelly in terms of some products that the councillor wants to launch. “I guess all we can say is ‘stay tuned.”

We The Norm plans to make its first donation later this week. For more info check out wethenorm.com or follow them on Twitter at @wethenormclub. 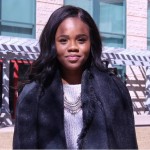