From singing in the stairwell to on stage

First-year RTA School of Media student Riley Martin was waiting for a cappella rehearsal in Kerr Hall when she heard the swell of alto and tenor voices coming from down the corridor.

She recognized the voices as fellow a cappella singers and, though she couldn’t see them yet, Martin joined in, singing out the first few lines of the tune by Nat King Cole.

“Smile though your heart is aching, smile even though it’s breaking.”

A few more voices joined from the other direction before they all came together in the pale hallway of Kerr Hall, just outside their rehearsal space.

Moments like this, that seem to be straight from the Fox-produced musical drama Glee, are one reason why members join Ryenamics, Ryerson’s a cappella group. Even though the group started in the midst of hype created by the popular TV show – as well as the Pitch Perfect movies (the Ryenamics were originally named “Pitchslap” in honour of Pitch Perfect) – it was formed to fill a gap in Musicians@Ryerson, a student group focused on all things music.

“(Some members) wanted to make something more vocally accessible because the picture that everyone was getting with Musicians@Ryerson back then was really instrument-based,” said Rangga Luksatrio, a third-year professional communications student and a tenor in the group.

In the beginning, the group was merely a handful of members singing together in the stairwell of the Student Campus Centre (SCC) in 2014.

Now, they’re a group of 19 that practises every Friday.

Prior to this year, the group spent more of its time holding casual jam sessions. Now they’ve shifted their focus towards becoming a more serious ensemble. In the past, they performed at Musicians@Ryerson events, such as the Darkness Concert, an annual event to raise awareness about blindness, and Culturejam, an annual showcase focused on cultural expression.

But they’ve started branching out and seeking a wider variety of opportunities, which led to their recent performance at a Graphic Communications Management (GCM) charity night.

They still use Musicians@Ryerson’s office in the SCC for their office hours and share some members and performance opportunities. But they’ve also started working with the theatre school, opening for the school’s performance of Jack and the Beanstalk last term and borrowing their Friday rehearsal space from them.

“We had the years before to kind of feel the boundaries of what it is to be an a cappella (group) and what it is to be a choir,” said Luksatrio. He added that they’ve sought out ways to improve the group’s technical skills in addition to looking for more performance opportunities. “We even brought in a conductor to teach us how to properly conduct an a cappella.”

Luksatrio said they were motivated to take a more formal approach to the group by observing the University of Toronto; individual colleges at the school have their own a cappella groups that “duke it out together,” in addition to performing and attending events like regionals. 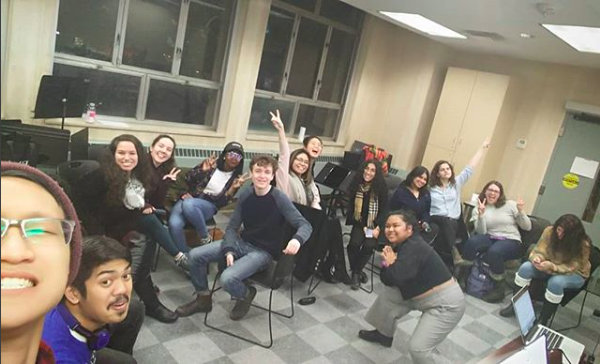 Ryenamics members at one of their Winter semester rehearsals.

He wants Ryenamics to emulate the culture of a cappella that U of T has developed, so he contacted other groups and their response made him realize what first steps they needed to take.

“Other groups let us know, ‘We would like to see your work,’” he said. “We realized, oh snap, we don’t have like really crazy professional work or enough in our portfolio to show that we’re consistent and we mean business, so that’s our goal.”

They’ve been increasing their portfolio through their performances, in addition to expanding their social media presence through their Facebook and Instagram pages. Third-year creative industries student Jessica Tucciarone said that members of the group have also started to work on creating their own arrangements.

“We use this program that’s called MuseScore and, basically, people can go on it and kind of compose (music and) put pieces together,” said Tucciarone. “A lot of our members are getting really familiar on that and putting together their own scores; someone’s working on a mash-up right now of two songs.”

And their next big performance will be at Parodos in June. Parodos Festival is an event hosted by Ryerson’s School of Performance, which intends to match students with industry professionals. Ryenamics will get the chance to perform in the festival in June.

In preparation for the event, they’ll have a three-day workshop in May led by a famous a cappella expert, Ben Bram.

Bram works with Pentatonix, a Grammy-winning a cappella group that formed out of NBC’s show The Sing-Off, as an arranging collaborator, producer and engineer. Pentatonix has collected a No. 1 Billboard album, among other achievements, and Ryenamics will get the chance to benefit from someone who works closely with them.

While it’s not typical for Bram to travel across the country to work with a single group, Peggy Shannon, the chair of Ryerson’s School of Performance, emailed Bram to have him help Ryenamics prepare for Parodos. What resulted was the plan for a three-day workshop led by Bram.

“They came to me with a proposal for exactly what they were looking for,” Bram said via email. “It seemed like a fun opportunity.”

The main goal of the workshop is to refine their setlist for the festival, though Bram said he’s happy to work on whatever the group is interested in learning. He said he’ll instruct them in areas such as “interpretation, intonation, blend, dynamics, mic technique (and) vocal percussion.”

But no matter the technical proficiency or professionalism of the group, there’s one thing about Ryenamics that won’t change: the sense of community.

“I really just wanted to find like a group of like-minded people to sing a cappella through the corridors together. We’ve done that,” said Luksatrio smiling. “It’s so much fun.”

As the rest of the school winds down, Ryenamics will continue to gear up for Parodos and a few other small performances. They also hope to work on special projects over the summer, such as a music video. Come fall, they want to attract more members (especially male members, since most who audition are female) to help them fill the halls with harmonies.