BREAKING NEWS
Top five COVID-19 safe Halloween activities for students
U SPORTS cancels winter national championships, all games until March 2021
Ryerson’s Jack Layton Chair hosts livestream of educators and musicians during COVID-19
Is your cough COVID, a cold or the flu? How to tell the...
Ryerson to launch a virtual pop-up gallery to raise awareness about sexual violence
Arts & LifeMusicVideos

Divine Council, a hip-hop collective based out of Virginia, played their first-ever Toronto show Monday evening at the Velvet Underground. The group, which consists of rappers Lord Linco, Cyrax!, $ilk Money and Chicago producer ICYTWAT, played a short show with an EP-dominated setlist.

Even though ICYTWAT was missing Monday night, the group still performed the song that launched their viral success, “P. Sherman (PS42WW$),” which he produced.

The song is a reference to the address P. Sherman, 42 Wallaby Way, Sydney from the Disney film Finding Nemo. The song was first posted on SoundCloud over two years ago and gained attention over the course of 2015. It peaked at the No. 1 spot on Spotify’s viral 50 chart in May 2016. 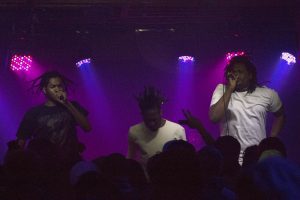 Around this time, the group caught the attention of notable hip-hop artist André 3000, who helped sign them to Epic Records. The group’s EP, Council World, was released last August and features André 3000 on the remix of “DECEMBA.”

Toronto rapper Drew Howard joined the stage as Divine Council’s opening act. His performance included unreleased material along with some of his most popular songs, such as “You’re Not My Mans.”

Divine Council is headed to Texas for the South by Southwest festival. Toronto was the third out of five stops of their mini North American tour.