Furry friends are the best new therapists for students

Sunlight streams into a tiny apartment on Jarvis Street. Small, furry cat toys litter the floor. On a grey loveseat, a chubby, orange cat sleeps. His name is Chandler and he’s a service cat.

“You don’t realize it because it’s very subconscious,” said Melissa Sorokolit, Chandler’s owner. “But animals are very intuitive with how you’re feeling.”

This is one of the reasons why in January 2016, Sorokolit decided to register Chandler as a therapy cat. After struggling with depression and other mental illnesses, Chandler has helped her feel more comfortable during her time away from home at university. 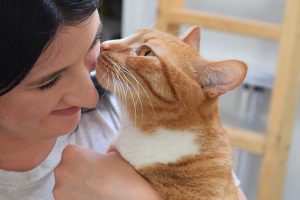 Chandler cuddles up to his owner, Melissa Sorokolit. (Photo by Linsey Raschkowan)

Sorokolit, a third-year film student at Ryerson, rescued Chandler from the Mississauga Humane Society more than two years ago when she was living at Campus Commons.

At three months old he was still bigger than the rest of the kittens most people fawned over at the humane society. She brought Chandler with her when she moved to Pitman Hall at Ryerson.

Sorokolit got the idea to register Chandler as an official service animal after meeting another person living in residence in late 2015. The first-year student owned a registered therapy cat for separation anxiety.

“University’s kind of the only thing that allowed me to get him, technically,” Sorokolit said. Her mom is allergic to cats, so she had never been allowed to have animals growing up.

Ryerson University has been accepting requests from students for service animals since at least 2007, according to Brandon Smith, Ryerson’s manager for Residence Life and Education. Nobody knows exactly when the animals started staying in residence.

Smith said that as long as a student fills out the appropriate requests forms for a service animal, it’s the university’s responsibility to accommodate the request. The university asks students to write a letter of understanding about their responsibility for the animal’s well being. They also need to provide a backup caregiver in case the student can no longer care for their pet.

Before coming to Ryerson, Sorokolit was attending Wilfred Laurier University without Chandler. She said she struggled with mental health in her time there.

“The time at Laurier, I was very, very depressed. I was suicidal, and living alone in residence,” Sorokolit said. “I felt like I wasn’t really coming home to anything. I didn’t have company. It as just very lonely, and I thought that I wanted to be alone.”

Sorokolit was living with obsessive compulsive disorder, as well as other personality disorders. She said she didn’t want to bother potential roommates with her mental health. Having Chandler with her at Ryerson makes her happy to come home.

“It’s very comforting to know that you’re coming home to a living creature that loves you at the end of the day,” she said. “It’s such a comforting feeling to be able to have a tangible thing that you can hold and show affection to in a mutual way.”

Now, when she’s feeling particularly anxious or depressed, Chandler picks up on it. He’ll lie on her bed with her, something she said he never usually does. Sorokolit thinks people underestimate the connections that are possible between people and animals.

“At the end of the day, anyone struggling with any mental illness kind of wants it to be like something they don’t have shame about, talking about and being open with, and they can still be loved and have it not define them,” Sorokolit said. “Having him in a home environment, he sees me at my highest points and at my lowest points, and (overwhelmingly) loves me, and that’s what anyone wants in their life, right?”

This isn’t the first time Sorokolit has seen animals coincide with therapy — a therapy dog joined her during a private session at Ryerson’s counselling centre. The dog provided a positive influence without even having to do or say anything to Sorokolit.

“It’s something so hard to talk about that seems like it’s earth shattering, and you look beside you and there’s this living thing that doesn’t even say anything back,” Sorokolit said about her experience with the therapy dog. “It’s listening to me bare all the issues that I might have, but still judgement free. Still understands that I’m going through pain.”

Some students might rely on animals to combat the loneliness of moving away from home. Leaving home can be scary for young adults, and animals can offer companionship.

Sierra Pomerleau, a journalism student in Toronto, first got her cat Beesly when she moved to downtown Toronto.

“Just petting them and having someone there that loves you unconditionally, and is always excited to see you come home,” Pomerleau said. “It’s a nice relaxer after a stressful day.” 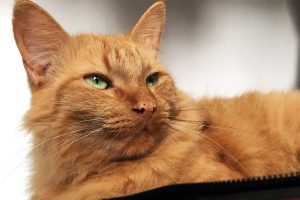 Beesly helps his owner, Sierra Pomerleau, combat the loneliness and separation anxiety she started to have after starting university. (Photo by Linsey Raschkowan)

Pomerleau moved to Toronto in the summer of 2017. She had tried various schools, including Western University and Ryerson, and currently attends Centennial College. When she first moved to Toronto, her life wasn’t very busy and there wasn’t much for her to do. There wasn’t anyone to talk to, until she adopted Beesly from the Toronto Humane Society.

Beesly isn’t a registered therapy animal. Although Pomerleau did adopt him to help her with mental disorders such as anxiety, she’s never made his status official. She has been lucky enough to live on her own, so she never needed to get him registered.

Pomerleau has only stayed in a university residence for three months without a therapy animal, at Ryerson’s O’Keefe house.

“Having a pet there definitely would have helped me feel more comfortable, because I remember feeling really homesick when I moved from Windsor,” Pomerleau said. “I think that having either one of my pets from home, or just someone there who’s familiar to keep me company, I think it would have helped me transition.”

Having a cat in O’Keefe house would have been difficult though, because of the small space. Beesly, or any animal, probably wouldn’t have been happy there, Pomerleau added. The benefits to therapy animals and how they fit into someone’s life, are subjective. Like Sorokolit with Chandler, a real connection with the animal is what’s most important.

The cost of owning a pet varies. Sometimes animals have fleas, or emergency vet bills, and the owner has to be prepared for that, Pomerleau said.

This could be one of the reasons why students like Pomerleau visit therapy dogs at various universities. Her first experience was with the therapy dogs at Western University, and she loved it.

“Any kind of animal that will let you pet it, it’s a stress relieving thing because it lifts your mood so much,” Pomerleau said. “It made my whole morning.”

Once a week, Ryerson brings therapy dogs registered at St. John’s Ambulance to visit students for an hour of dog therapy, as part of a program called RU Therapy Dogs.

Cassie Anton, an organizer for the RU Therapy Dogs, said students might just show up because they love dogs, or they might have had pets at home that they can’t see while studying at Ryerson. The event, which takes place on the third floor of Ryerson’s Student Learning Centre (SLC) at noon every Wednesday, is always busy. Hundreds of students showed up during Ryerson’s 2017 orientation week to see the dogs, and many continue to show up now.

“We like to think, on a deeper level, there’s some sort of de-stress and mental wellness benefits just in actually petting a dog,” Anton said. The dogs can help take someone’s mind away from studies and give students a moment to relax.

Anton is a full-time staff member for the student life department at Ryerson. She works with Ryerson leadership, who took on organizing the therapy dogs last year. They help book the space and coordinate the dogs’ schedule. 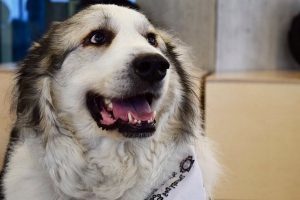 Lilli, a great Pyrenees, is a registered therapy dog, and another volunteer at RU Therapy Dogs. (Photo by Linsey Raschkowan)

The owners bring their dogs as part of a volunteer requirement to maintain the animals’ therapy status. They also volunteer at retirement homes, with small children, or in court. Some of the volunteers have been involved with RU therapy dogs for years.

Students that attend the event are asked to fill out mood cards, so Anton can see students leaving happier.

Animals may not be a complete fix to all the emotions that students can experience when first coming to university, but they do help.

“I got Beesly because I was lonely,” Pomerleau said. “Which sounds sad, but it’s not. It’s totally normal.”

Students who find themselves under stress in university can rely on someone else to help them out mentally. Sometimes that someone else is furry.