BREAKING NEWS
Ryerson science departments give medical supplies to Toronto hospitals fighting COVID-19
Toronto’s global climate strike moves online
A diary: what it was like leaving residence due to COVID-19
How to study at home for exams
Student groups are taking out the social from social distancing
Arts & LifeVideosVisual Arts & Design 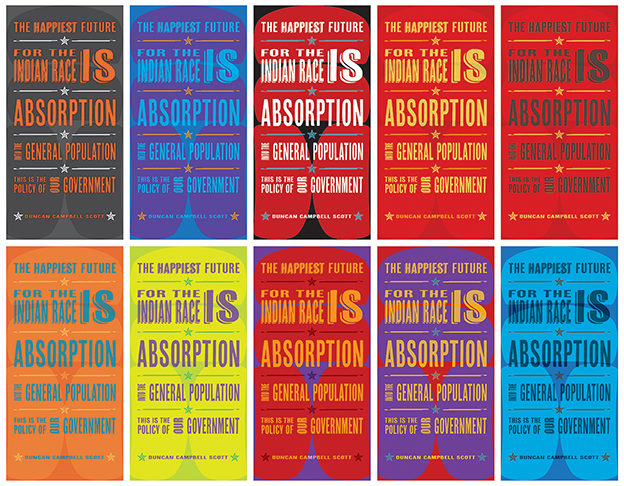 Sonny Assu vividly remembers his grandmother telling the story about how excited she was to start her first day of high school. But that day turned ugly almost immediately.

“A boy left a bar of soap on her desk, pretty much just saying, you’re a dirty Indian,” said Assu at a media preview of Ghost Dance: Activism. Resistance. Art.

That desk is recreated in the exhibit. It’s complete with an authentic red bar of 1930s Lifebuoy soap, the brand that was left on Assu’s grandmother’s desk. It’s representative of the themes of struggle and resistance that run throughout the show, which is curated by Steve Loft, a Six Nations Mohawk and visiting Trudeau scholar at Ryerson.

“Some would say we have been the victims of a long history of colonialism but I dispute that because we’re not victims,” said Loft in his opening remarks at the preview.

“We’re proud. We’re strong. We’re here. But we have to remember that being an aboriginal person in this country is in itself an act of daily, continuing resistance, and that’s what this show is about,” he continued.

Indigenous history in Canada is woven throughout the exhibit in innovative ways.

A multimedia piece by the artist Skawennati uses avatars from the popular alternate reality computer game Second Life to recreate scenes from indigenous history. It showcases episodes such as the Oka Crisis, a 1990 land dispute between a group of Mohawks and a Quebec town where one person was killed, for a new audience. The short videos play on a loo p in a screening room.

Skawennati said she took special care to give all the avatars distinct names and personalities to combat the stereotype of the silent, anonymous indigenous person often seen in popular culture.

Another work by Assu brings famous Canadian bureaucrat Duncan Campbell Scott’s message about the assimilation of indigenous peoples to life through a series of pop art style posters.

Scott was a fierce advocate of assimilation through his position as deputy superintendent of the department of Indian Affairs from 1913 to 1932.

Walking through the exhibit, it’s easy to feel the sense of exclusion that can come with being an indigenous person in Canada.

One work, a collaboration between Anishinabe artist Scott Benesiinaabandan and Theo Sims, is at first frustrating because the viewer can’t see behind a wooden wall.

“We wanted to address who has power and who has access to power and knowledge,” explained Benesiinaabandan. “It’s a full installation behind the barricade. But as spectators you only get a specific access point and that’s all you’re allowed to see.”

The installation is viewed through security mirrors.

Another work displays a series of phones in a small, empty room. High above near the ceiling there’s a painted banner showing a beautiful view of rolling green hills and blue sky.

The artist Cheryl L’Hirondelle wanted to recreate the feeling of being imprisoned.

It’s a reality for many indigenous people who are disproportionately represented in the Canadian criminal justice system.

But another key theme is inclusion.

A video of a round dance, a key aspect of the recent Idle No More movement, greets visitors to the exhibit.

“It’s about allying yourself self … to proclaim the space in a way that says ‘join us.’ It’s not us against you, it’s about collaboration,” he explained.

For Loft, art is an ideal point of intersection to start this process.

“It’s a place where we can come together and we can deal with some challenging things, but we can do it in a way that engages us,” he said.

Wi-Fi will find a way outside