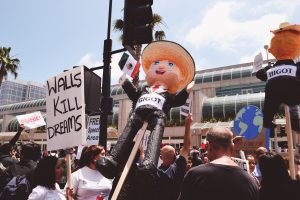 Protesters are upset about various policies surrounding the environment, immigration and LGBTQ rights. They are also protesting the legitimacy of his victory — as he won the Electoral College, but Hillary Clinton won the popular vote. Though the protests have remained largely peaceful, those in Los Angeles and Oregon have seen violence and the arrest of hundreds of people.

Protests across these cities have have voiced similar commands, including “Dump Trump,” which has become a catchy slogan for the letters and online petitions circulating that are calling for reform of the Electoral College.

The current system allows for a nominee to win the presidency even if they loos the popular vote. Changing the system is very unlikely to happen, as such a radical change would require constitutional reform.

Protesters want to make it known that rhetoric-fuelled violence against minorities, people of colour and women will not be accepted.
They are looking to make a statement of political instability to render it difficult for Trump to govern, specifically in his first 100 days in office. They are calling for Trump to denounce many of the divisive things he has said, recant them and formally apologize.

Vive La France
This past Sunday, Nov. 13, 2016, marked the first anniversary of the horrific Paris terrorist attacks that killed 130 people. To commemorate the day, ceremonies were held across the city.

Hundreds of lanterns were placed on the Canal Saint Martin near the bars where many were gunned down. On the lanterns were the names of the victims and messages of strength, including: “Solidarity” “We Miss You” and “Paris Resists!”

In another ceremony, paper hearts were thrown in the air at the Place de la Republique, which became a makeshift shrine following the attacks.
Ceremonies were also held at each of the attack sites, including: Stade de France, Le Carillon, Le Petit Cambodge, Café Bonne Biere, Casa Nostra, La Belle Equipe, Comptoir Voltaire, and the Bataclan. 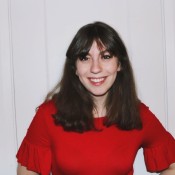 Alexandra is the Features Editor at the Ryersonian.

Alexandra is the Features Editor at the Ryersonian.