On the concrete floor of an empty lecture hall, young girls work in groups, equipped with only toothpicks, duct tape and pipe insulators to build a complex structure of loops, ridges and steep slopes.With the simplest of building materials, their challenge is to safely transport a marble through an intricate roller-coaster without it falling out.

It’s the first activity of the day arranged by Go ENG Girl, an Ontario university-wide event that aims to encourage girls in Grades 7-10 to think about pursuing a career in engineering. Volunteers from Ryerson’s Women in Engineering group organized the hands-on affair, which also included an egg drop and panel discussion. It took place last Saturday at the George Vari Engineering and Computing Centre.

This is the ninth year Ryerson has run the event, which aims to tackle the under-representation of women in university engineering programs. Founded in 2005, Go ENG Girl is run by Mary A. Wells, the chair of the Ontario Network of Women in Engineering (ONWiE) and an engineering professor at the University of Waterloo.

Wells says there are three main misconceptions that young girls have about engineers. The first is that they work alone. Secondly, that they spend all of their time in front of a computer. And lastly, that the job is just too difficult to manage.

“They lack confidence in their technical abilities.” She says that is the most frustrating thing about the situation for her. “When you look at the scores in high school math and science, women often do better than men, but they think it’s a fluke or mistake. They don’t believe in themselves.”

ONWiE reports that since 2005, the number of women applying to engineering programs has more than doubled.

But the Faculty of Engineering and Architecture Science (FEAS) at Ryerson hasn’t seen similar growth. According to the school, women made up just 20 per cent of all FEAS undergraduate students in fall 2013, a three per cent drop since 2005.

Though turnout to the Go ENG Girl event was lower than organizers expected, all 13 girls left with smiles and good memories.

Engineer George Eichholzer brought his seventh-grade daughter, Zoey, in hopes of exposing her to the realities of being an engineer.

“I’m not going to force her to do one thing or another,” he says. “But if she shows an interest, then I would certainly encourage her to do it.”

Pramila David, the vice-principal of Winchester Junior and Senior Public School, brought four students with her and encouraged them to interact with engineering students.

“I work in an inner city school and engineering is a terrific goal for many of our students that isn’t promoted or encouraged enough,” David says.

Due to the low rate of female engineering students, there are scholarships specifically for women studying the field. Go ENG Girl organizer Nika Zolfaghari won several of them due to her work with women in engineering and equity. Zolfaghari graduated from Ryerson’s biomedical engineering program and is currently a master’s student in electrical and computer engineering. She hopes to pass along the engineering bug to her younger sister, whom she brought along to the Go ENG Girl event.

“Because you are a female in a male dominated program, it gives people that impression that you are fearless, like you don’t let stereotypes get to you,” Zolfaghari says. “And that confidence led to so many opportunities for me.”

Zolfaghari explains that although she felt some shock in her first year of university because of the large number of males in her classes, it never really bothered her.

“I was never one of those girls who got shy or intimidated by the guys. I just saw it as an opportunity to prove myself. And I did.” 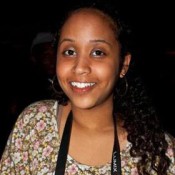