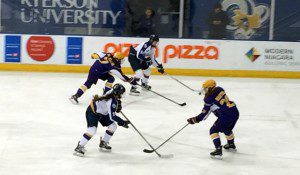 It wasn’t the ideal last home game of the season, but for Rams captain Jessica Hartwick her final game at the Mattamy Athletic Centre is something she won’t soon forget.

“We were trying to have as much fun as we could and not focus on the ending,” Hartwick said. “We wanted to focus on right here, right now and doing the best we can.”

Fellow senior teammates Melissa Wronzberg, Paulena Jakarsezian, Emma Crawley and Emily Rose Galliani Pecchia were also honoured before the game. Each player joined the team in its first season in 2011, and they become the first women’s hockey team members to finish their careers as fifth-year players.

While this season hasn’t been kind to the Rams, players point to a team dynamic that has helped them carry through. “These are the type of people who you’re going to have in your life for the rest of your life,” Hartwick said. “You have a second family with you at all times.”

Currently, Ryerson ranks last across the OUA (Ontario University Athletics) and has averaged a league worst 1.26 goals-per-game. This is an area Rams head coach Lisa Haley is looking to address next season and six new recruits (four of them forwards) have already confirmed roster spots for next year.

“We see them being able to generate some offence for us,” said Haley. “I think that’s going to help us play from the front instead of chasing the game from behind, which we did a lot this year.”

In fact, Victoria Chapman’s first period tally last night is just the fourth time Ryerson has opened the scoring this season. Rams rookie, Karli Nummikoski dished a pass to Chapman in the slot, and the former Brock Badger wasted no time notching her first Ryerson goal.

“I don’t want to pinpoint it on myself,” said Chapman. “I think it was the team effort that helped me get the goal and hopefully that’s the first of many.”

While Ryerson hasn’t found the back of net as often as they’d like this year, key injuries have also plagued the Rams this season. “I think we probably deserve a few more wins than what we got,” said Haley. “Every player that was injured was a veteran player and we’ve been playing well as of late.“ At times, Ryerson was forced to start games with a mere 13 skaters despite having 27 players on the roster, but still managed to land points off top teams.

Ryerson has points in three of its last four games — a definite highlight amidst the Rams 2015-16 campaign — and Haley expects this will bode well heading into next season.

“Finding how much determination and passion there is in that dressing room means a lot,” said Haley. “If we can add a few more skilled pieces that passion is going to show even more and I think we’ll be in much better shape this point next year.”

The Rams play its final game of the season Saturday when they visit the Waterloo Warriors at 2 p.m.

Five tips for success you need to know before midterm season