Ryerson ended up spending $111,000 on the shoddy paint jobs on Gould Street that will be paved over by the city this month. (Ryersonian file photo)

In an email to The Ryersonian Wednesday morning, the university’s vice-president of administration, Julia Hanigsberg, broke down exactly how much the university has paid for the paint jobs on Gould and Victoria streets.

Hanigsberg said she can’t say much but did confirm that the school is in the process of contesting the contract because “we were not satisfied with the quality of the work done by the subcontractors.”

The Gould Street controversy began last September, when the university decided to paint the main corridors of the campus after the streets were damaged by construction over the summer. An initial $25,000 yellow paint job was rushed in for September before a second $172,000 coat was applied for durability in October.

But, as fall weather set in, the paint began to peel almost immediately. This prompted Hanigsberg to apologized publicly for the school’s blunder in a blog post, “I’m Sorry,” in January.

Ryerson has requested the city to repave Gould and Victoria streets with asphalt, and the project is set to begin after Thanksgiving Monday. 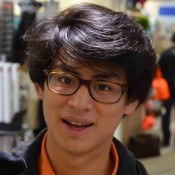 If you’re appy and you know it, download now