That’s the Gen Y Perspective, a TV show that airs online covering everything from politics to religion to breaking world news in a way that specifically caters to generation Y viewers.

Run by a group of fourth-year RTA students for their practicum project, Gen Y Perspective hopes to break down stereotypes that gen-Yers are disengaged and uninformed.

The creators want viewers to see that gen-Y is not the entitled or lazy generation that it’s so often framed as.

“Being part of gen-Y myself, it was important to me that we really show people this informed, intellectual, engaged side of us,” said Bailey Taylor Parnell, the host and co-executive producer of the show.

Parnell and Rachel Krutow, the other co-executive producer, came up with the idea in August.

The show is the second international project under Global Campus Network, an alliance of post-secondary institutions around the globe, led by Ryerson. Students from around the world are frequently featured on the show through video chats to give a global perspective.

“What’s particularly wonderful about the Gen Y Perspective is that we are able to find commonalities in how we feel about an issue despite having very different cultures and customs,” said Caitlin Dosa, one of six members of Gen Y Perspective’s executive team.

Though this show is part of their final year project, Parnell sees potential in the project, and says that they want the show to go further than the due date in February. There’s a chance that could happen to, as the show got attention from the CTV for its gen-Y innovation.

“For now, we are going into post-production for the main studio episodes,” said Parnell, “but we welcome and encourage content submissions to our website. If you are in gen-Y and have a perspective on something, we’d love to hear it.”

You can watch episodes of the Gen Y Perspective here. 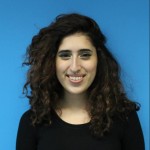 Journalist, intersectional feminist, illustrator, and Lord of The Rings enthusiast hanging around Toronto.

Hanna graduated from the Ryerson School of Journalism in 2015.

Journalist, intersectional feminist, illustrator, and Lord of The Rings enthusiast hanging around Toronto. Hanna graduated from the Ryerson School of Journalism in 2015.