From what Hayley Graham remembers, she has the distinction of recording the first error in Ryerson women’s fastpitch history.

In the team’s first-ever game against Queen’s, a ball hit to her ricocheted off her wrist resulting in the error. While the team lost their first two games, they would rally to win their next two. That first weekend stands out in Graham’s mind as the highlight in a season of ups and downs.

Last September, Ryerson’s women’s fastpitch team began their inaugural season as they competed in the Ontario Intercollegiate Women’s Fastpitch Association as a club team for the first time. In their first year, the team went 7-15 as injuries and a lack of depth contributed to the team ending the season on an eight-game losing streak. For Ryerson’s fastpitch team, their season was spent navigating the obstacles of being a brand new team.

As the coach of a brand new team, this presented different challenges for Nishihama. He said not knowing the skill level of all of the players was probably the hardest part, which meant trying to divide up playing time for 18 players was a struggle. For the upcoming season, he said he is going to be stricter and have the team understand they have to earn their positions by playing the best players at each position. He admits that because it was their first year, trying to be fair to everybody maybe hurt them a little. Since it is difficult to develop during the season, he wants to have experienced players and increase the skill level of the team overall.

Throughout the season, Nishihama said getting the commitment from the players to play all 24 games was difficult, reiterating that it’s not a recreation program where you can just show up for the games. With players having different schedules, it makes it harder to develop chemistry when not every player shows up, and with fastpitch being a team sport, players need to practice together to be in sync. For Betty Duong, who played her first and final year with the team as a graduating student, she said they just threw themselves into the game as they didn’t know where they were going to play and that some had experience, while others did not. As a returning player and co-captain for next year’s team, Graham is expected to be a leader and act as the middle person between the players and the coaching staff.

One of biggest challenges of being a club team is getting the necessary funding. Unlike varsity teams, players have to pay fees every season to play and fundraise to make ends meet. The team received a couple of grants from the school, including applying for the student initiative fund. They held bake sales, sold Krispy Kreme doughnuts and had 50/50 and raffle draws at games. The players paid about $325 in player fees. Nishihama and associate coach Michael Alexander both coach fastpitch teams outside of Ryerson and were able to borrow equipment such as bats, plates and other practice equipment. Being a new team, they don’t have the leverage to ask for a lot. 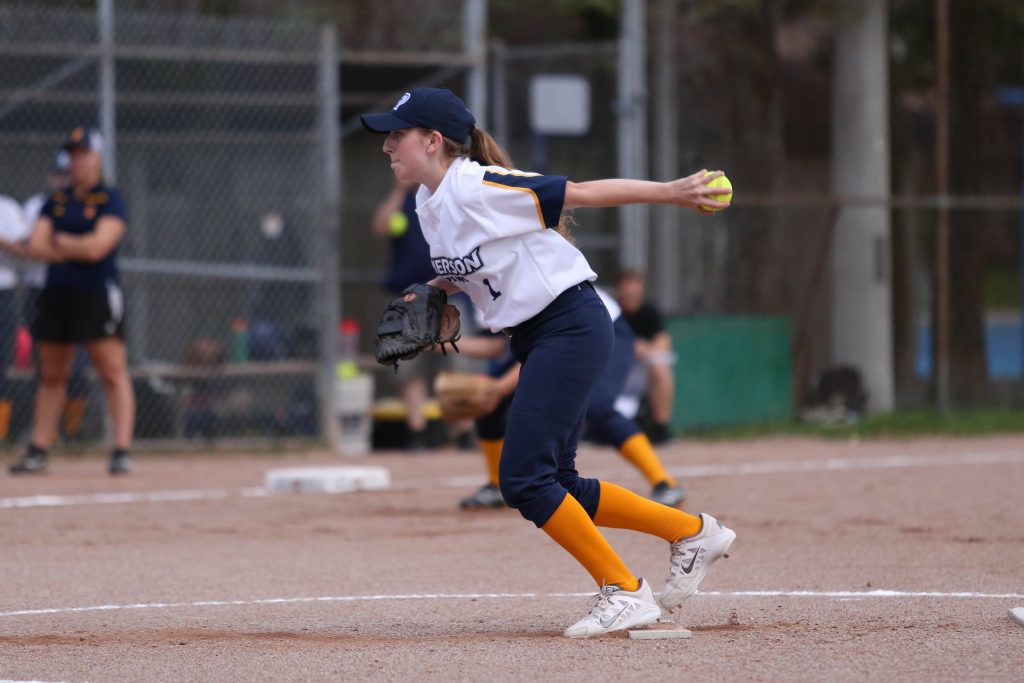 Down the stretch, injuries became an issue for the team. Duong said several of her teammates had injuries to shoulders and knees saying, “our starting lineup was being overused.” The season is only six weeks long but they play 24 games, including doubleheaders on the weekends. Graham said that the first year in particular was a struggle for durability in not knowing how their bodies would hold up and trying to make sure they’re healthy towards the end of the season. She ended the season with an injury that shut her down for the rest of the year.

“My doctor, [physiotherapist], everyone said ‘don’t pick up a ball until January please if you want an arm when you’re 30’,” said Graham. She developed bicep tendonitis during the season and partial tearing in her shoulder.

If fastpitch needs a template on how to grow as a team, they just have to look at Ryerson’s baseball team. A club team as well, baseball has faced similar challenges to what fastpitch is currently going through. Players have to pay between $420-$460 per season depending on fundraising and the amount of travel necessary in a season. The coaching staff had to build a program from scratch by taking a team with no existing chemistry and have them learn to work together by playing at the OUA level.

For baseball head coach Ben Rich, one of his key challenges was establishing what the expectations are for players in terms of performance, behaviour and dedication and getting them all to buy into that.

Going into their second season, they were able to double their win total, while improvement in skill level from new recruits and returning players increased. By the third year, the team made the playoffs. Now heading into their fifth year, maintaining that level of play has been a challenge as the team missed the playoffs this past season.

In terms of playing fields, the team finally has a permanent place to practice and host their home games this season at Stan Wadlow Park in East York. In terms of advice for up and coming teams, like fastpitch, Rich said, “show athletics that you have a plan. You’ve got to come in and understand and have mapped out all of the challenges you might face, have solutions for addressing those and have a vision and goals for your team. Showing that you’ve done that due diligence whether it’s financially, player interest, securing fields — demonstrate that you’ve done that work.”

For Nishihama and Graham, they said the immediate goal for next season is to make the playoffs. As for down the road, the team aims to reach varsity status, but they have some way to go. “We know we have to [go] through the growing pains of being a club team, trying to build a team. Even financially we have to start from zero, building a program is part of the process of getting to varsity level,” said Nishihama.