Heartbreak for Ryerson Rams as they fall to McMaster Marauders

Ryerson’s soccer team lost to the McMaster Marauders 5-3 on penalties at the Ron Joyce Stadium Saturday night, ending the Ram’s season in the semi finals.

The game started off well for the Rams, who dominated in the opening minutes of the first half, putting pressure on the Marauders and preventing them from getting past their own half.

It didn’t take long for the Marauders to find their footing and get into the game.

Lead scorer, Mark Reilly, caused all sorts of problems for Rams goalie Christian Maraldo on this cold and frigid night.

In the 23rd minute, Reilly’s shot was mishandled by the keeper, who let the ball slip through his fingers before recovering it right away.

The Marauders forward had another chance when Maraldo made a diving save in the first half to keep the game scoreless.

Ryerson produced some great scoring opportunities of its own.

Their best effort came in the 35th minute from winger Luka Lee, who sent his glancing header just wide of the net.

After 45 minutes, both teams had plenty of goal-scoring opportunities, giving a clear indication this game could go either way. Nonetheless, the game remained nil-to-nil as the players headed towards the tunnel.

The Rams would start the second half with the same energy shown at the beginning of the match.

First-year forward Raheem Rose came off the bench with something to prove, leading the Ryerson attack with his speed and finesse.

“I wanted to make a big impact and show that I’m a force to be reckoned with,” said Rose after the game.

Despite his efforts, the Rams failed to find the back of the net and at the other end, the Marauders gained momentum.

Rams defender Kyle Stewart was solid all night, but conceded a free kick late in the second half. Marauders’ Yunus Mollayev stepped up to take it and fooled everyone by taking a direct shot on goal, which grazed the post.

The game would end goalless and both teams would have to play an additional 30 minutes.

Extra-time produced even more scoring opportunities, but no goals. A penalty shootout would decide the winner of this match.

The Marauders took advantage and slotted home all five of their shots, clinching a berth in the Ontario University Athletics final against the York Lions.

After the game, Rams head coach Filip Prostran said he was proud of his team’s effort.

“Both were defensively sound coached teams — it was a 0-0 game and like always, penalty shootouts are always a coin toss, and today we were on the wrong end.”

The Rams season isn’t over yet. They play in a bronze medal consolation match against the Toronto Varsity Blues on Sunday at 3:00 p.m.

But Prostran said the game doesn’t mean much.

“Between you and me and this microphone, I don’t really play for third place. Tomorrow’s game is just going through the motions, to be honest.” 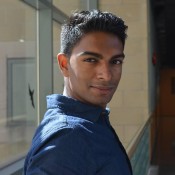 Nitish Bissonauth graduated from the Ryerson School of Journalism in 2015. He was the newsroom manager, line-up editor and a reporter for The Ryersonian.
@NBissonauth

Nitish Bissonauth graduated from the Ryerson School of Journalism in 2015. He was the newsroom manager, line-up editor and a reporter for The Ryersonian. @NBissonauth