BREAKING NEWS
Post-secondary students and recent graduates facing job anxiety and layoffs due to COVID-19
BREAKING: Ryerson’s spring convocation postponed to fall
Mixed emotions from students working from home during COVID-19
How young people are coming together during COVID-19
A user’s guide to closures and cancellations in Toronto during COVID-19
Arts & Life

With exams approaching, many students are thinking about where they will stay during the winter break. Now, they have the option to stay on campus.

For students living in campus residence, past winter break closures have enforced that they leave within a few days after their final exams.

Brandon Smith, the manager of Residence Life and Education, said this year will be a bit different.

The students that have chosen to stay had to express interest when they were first applying for residence, and then officially register to be on campus in mid October. Additional spaces in the International Living & Learning Centre (ILC) were also made available to students who registered late.

As far as what’s available to students who want to stay, Smith said that there are still support systems for them.

“The university is closed over this time frame, so the only resources available to them are our student staff residence advisor (RA) team, our residence service desk (RSD) team, our professional live-in residence life facilitators who support and manage our community, and campus security,” he said.

Ryan Schouten is a fourth-year media production student who’s been in residence his entire Ryerson career. He lived in the ILC in his first year, worked as an RA there in second year, and has been an RA at Pitman for the last two years. Because this is the first year students are able to stay on campus, Schouten chose to stay and work over the break.

“Typically we all, including the student staff, have to move out for the break,” he said. “It was put into our contracts where we were asked who was interested in it, and for me personally I wanted to stay downtown. I have another part-time job on top of it, so it just kind of all worked out really well.”

In the past, students living in residence would have to find somewhere to spend the break if they didn’t want to travel home. Schouten recalls that some students would stay with friends, or find other accommodations near campus.

Not all housing staff will be working over the break, but those who are, have begun planning events for students.

“We’ve been sort of brainstorming right now, nothing is set in stone, but we’re working to make sure that the students that are actually staying with us have the opportunity to come out,” Schouten said. “We’re doing a lot of winter-related activities. One of the excursions we’re trying to do is to go to the Distillery District for the holiday market, just to get them out of the space.”

For students staying in Toronto, on or off campus, there are plenty of things happening throughout December and into January. Depending on your interests, the Ryersonian has come up with a list of things close to campus that can be done or seen over the break. 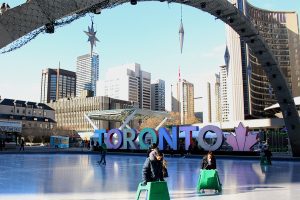 Skaters take advantage of the ice rink at Nathan Phillips Square, one of many places that students can visit in Toronto over the winter break. (Photo by Ammi Parmar)

If you want to get in the holiday spirit, Toronto’s got a wide variety of markets and festivals in December. One of the most popular events is the Toronto Christmas Market, which is located in the Distillery District and open until December 23. The Market is paid admission only on weekends and Fridays, and will cost you $6.00, but admission is free on weekdays (and it tends to be less busy then, too!).

Other seasonal events happening include the New Year’s Eve celebration at Nathan Phillips Square, which features live music, a skating rink and fireworks. Skating at the square is always open to the public, but if you want to lace up without the crowds of tourists, consider heading to the lake. The ice rink at Harbourfront Centre is usually less busy, and gets you out of the downtown crowds. And if you’re close to campus, head down to Lake Devo – once it gets cold enough, it becomes an ice rink that’s popular with hockey players and families.

For students who love music and want to spend their break at concerts, there are dozens happening around the city while classes are out. Some big names performing in Toronto in December include LCD Soundsystem, Alexisonfire and Serena Ryder, but a full list of concerts can be found at: https://concertsto.com/

If you lean towards stage shows, Mirvish Productions has a variety of productions in their downtown theatres. Until January 7, Bat out of Hell will be playing at the Ed Mirvish Theatre near Yonge-Dundas square. Based on Meatloaf’s best-selling album, the show comes straight from London, England, in its North American premiere. Tickets range from $29 to $179.

Fans of more traditional musical theatre can catch the new production of Grease at the Elgin and Winter Garden Theatre, located near Yonge and Queen St. The show runs until January 7 and features a cast of well-known actors, including Janel Parrish from Pretty Little Liars and Katie Findlay from How To Get Away With Murder. Tickets range from $20 to $169.

Finally, Toronto is home to the National Ballet of Canada, which means that the company will be putting on its annual production of The Nutcracker at the Four Seasons Centre for the Performing Arts. The classic Christmas story tends to sell out in Toronto, so if you’re interested get your tickets well in advance. Tickets range from $80 to $190.

If you celebrate Christmas, or if you just want to eat a ton of food, several restaurants near campus will be open and offering holiday meals on December 25. Fran’s has three locations downtown, all within walking distance from campus, and will offer a full turkey dinner for Christmas day as well as their usual diner menu. If you want to get away from campus, you can get a holiday dinner at places like the 7West Café near Yonge and Bloor Sts., or the Drake Hotel on Queen St. W.

pending the winter break in Toronto gives you a chance to do things that aren’t offered the rest of the year. If you find yourself downtown, take time to check out some events or try something new.

OPINION: My many bad ideas