Holocaust survivor recounts his experiences during the Second World War

The Sears Atrium in Ryerson’s engineering building fell silent as 83-year-old Holocaust survivor Sol Nayman ascended to the podium. Nayman was ready to talk to another group of wide-eyed students, both Jewish and non-Jewish, about the atrocities he experienced during the Second World War.

On Nov. 7, as part of Ryerson’s Holocaust Education Week, Polish-born Nayman reflected on the seemingly ever-present anti-Semitism in the world, particularly in the wake of the Pittsburgh synagogue shooting which took the lives of 11 people on Oct. 27.

The theme of this year’s Holocaust Education Week was the untold stories of people whose lives were endangered by the Nazis. Throughout the week, various events brought awareness and fostered new discussions about the Holocaust. This included an in-depth discussion with the producer and director of the film The Accountant of Auschwitz, as well as photo exhibits displayed around campus, depicting the effects of the Holocaust on Europe’s Jewish population, the LGBTQ+ communities and persons with disabilities. These events were meant to demonstrate how the Holocaust wasn’t merely a Jewish tragedy, but one that affected a number of communities.

The memorial ceremony on Nov. 7 started off with members of Ryerson Hillel, an on-campus centre for Jewish life, reciting a remembrance prayer and lighting candles for the victims of the Holocaust, including Jews, people who were racially targeted, people with disabilities, the LGBTQ+ community and the righteous gentiles who risked their lives to save others. The prayer was followed by a moment of silence and then, it was Nayman’s turn to speak. In his speech,he stressed the importance of listening to Holocaust survivors.

“The window is rapidly closing on the ability of survivors to relay their stories as more than 1,000 pass away every year, and within a decade, few will be well enough to share their stories,” said Nayman. “On the other hand, Holocaust deniers and anti-Semites . . . these haters number in millions and will be around forever. My mission is to share my memories and experiences with you, so that you may have the first-hand response to deniers.”

Nayman was born in 1935 in a small village called Stroczek Wegrowski, about  25 kilometres from Treblinka, or what Nayman called his “neighbourhood death camp.” Had he not escaped when the war broke out, he said this is likely where his ashes would have been.

When the Germans invaded Poland on Sept. 1, 1939, his village was one of the first to be taken over. By Sept. 9, Nayman said his village was almost completely destroyed. As his family was escaping to hide in the forest, they could see their village ablaze.

The family later found themselves in Bialystock, 100 kilometres from Stroczek Wegrowski. However, they weren’t there for long. Josef Stalin, the Soviet dictator, known for being one of the worst mass murderers in history, inadvertently saved their lives, as well as the lives of tens of thousands of Jews, by deporting them to forced labour camps across Siberia and other regions throughout the Soviet Union. But millions of others didn’t see the same fate.

“The Holocaust resulted in six million fatalities of our people,” said Nayman. “About half were slaughtered by the Nazis in Poland, while 2.6 million died in the Soviet Union in what has been referred to as a ‘parallel Holocaust’ and is the essence of my untold story.”

Nayman’s  family was sent via cattle car to Syktyvkar, the capital of the Komi Republic, just west of Siberia. There, they lived in horrible conditions with very little food and no medication.

“It looked very much like any concentration camp, with the exception that the Soviet soldiers did not beat us necessarily and did not murder necessarily,” said Nayman. “That was left to starvation, disease, hypothermia, etcetera.”

His family’s sole objective, said Nayman, was what he called their “long-term strategy,” — to “survive today and hope to see tomorrow.”

As the war raged on and Hitler invaded the Soviet Union, breaking his treaty with Stalin, Nayman’s family was transported to work on a factory in Haivoron, a town in Ukraine. There, they were helped by a nearby Ukrainian farmer family. “Nobody survives the Holocaust without some kindness from somebody,” said Nayman.

After the war, Nayman’s  family was able to leave the Soviet Union and ended up in an occupation zone in a former SS camp in Wetzlar, Germany. There, they were reunited with the few surviving members of their family, and Nayman first found out what had happened during the war and what the Nazis had done to the Jewish people. Photos of the death camps were circulated, depicting the state of prisoners and their living conditions.

“In the Soviet Union, there was absolutely nothing publicized about the Holocaust —  nothing in the news, nothing in any papers for the entire duration of the war,” said Nayman. “It was the first time I saw tattoos on the arms of survivors. I held a bar of soap made of Jewish fat, with a Nazi swastika and an inscription, ‘Rein Juden Fett,’ pure Jewish fat. It was there that I held a lampshade made of Jewish skin.”

The family was able to immigrate to Canada in the fall of 1948, after Nayman’s cousin managed to bribe officials with a gold coin to get visas for their family. Nayman said his life in Canada compensated him for the childhood that he lost during the Holocaust. “I’ve been blessed beyond words,” said Nayman, who has been married for 57 years, with two sons and five grandchildren.

But reflecting on his fortune in Canada, he urges the public to never forget the atrocities that were committed by the Nazis during the war.

“Holocaust survivors have risen from the ashes of the death camps,” said Nayman. “Holocaust survivors are the actual victors over Nazis and Hitler . . .  The Holocaust is 73 years past, yet today there is no shortage of the elements that lead to mass killings. “If we forget history, it tends to repeat itself.”

Holocaust education week was created through a partnership between Ryerson University, the Ryerson Students’ Union and Ryerson Hillel. 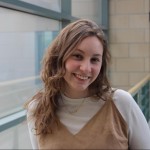 Dear Ruty,
I was not aware that you had written an article about my address at Ryerson during Holocaust Education Week. I came across it while going through my computer and wanted to thank you for your coverage. It was a privilege to speak at your school and I wish you every success in your endeavors. Warmest regards.
Sol