BREAKING NEWS
Ryerson students can join Campus knct’s New Year’s resolution initiative
COVID-19 has taken a toll on Ryerson student athletes
COVID-19 has had a negative impact on students with disabilities
Music lovers at Ryerson reflect on a year without concerts
Despite student petition, Ryerson holds firm on decision not to offer Fall 2020...
Arts & LifeFilm & Television

How socially challenged RU? This student game show will let you know

“We would rather sit on a subway and stare at our cellphone screens or an advertisement for 20 minutes than strike up a convo with those around us,” said fourth-year radio and television student, Spencer Cathcart.

He and seven of his group members are using their final practicum project as an opportunity to show how socially awkward society can be — and possibly change that. Socially Challenged is a reality television game show series that challenges people to fulfill outrageous tasks involving strangers in Toronto.

The delusional show host, Mr. Host Man (played by Cathcart), is a character who believes that he is the ultimate social master. His mission is to find one person in the world who is not socially challenged.

“He’s an asshole. He rips people apart on the show. I am basically the opposite of who they aspire to be,” Cathcart said.

He said the host’s aggressive personality in the show is strategic — to point out the irony and humour of social awkwardness.

After multiple tests and elimination rounds, the last contestant standing receives the “social crown of supremacy.” They also get to attend a social event of their dreams — or so they think.

This idea for the project came to Cathcart last summer.

“I was home feeling pretty lonely, so I thought it would be interesting to brainstorm some sort of practicum idea that pokes fun at that. I wanted my final project to be something that I could bring my own creativity to,” he said.

Cathcart said the “crappy” selection of modern reality television had a slight influence on his project idea. He also attributed it to social awareness videos that have gone viral in the past couple years.

“Technology is spreading us further apart than it is bringing us closer together,” he said. “I don’t want Socially Challenged to be conceived as an activist piece, but more of a comedy with a social message.”

Cathcart said that his classmates were quick to jump on his practicum idea moments after he presented his vision to the class.

He expected to pull the show off with a group of four students. To his surprise, it became a group of eight.

The group posted ads on Kijiji and Craigslist to find potential participants.

To catch online attention, they asked for individuals who were interested in the topic of social awkwardness and the effects of technology.

Auditions were held in late October last year. Participants were asked to dance to upbeat music, and pretend to encourage invisible people to dance with them. Three contestants were then chosen.

Three of the show’s chosen contestants hanging out on set. (Courtesy Karoline Podolak)

According to Cathcart, this project is for more than a passing grade in the RTA program.
The group plans to pitch its show and press kit to broadcasting markets in hopes of airing on networks such as MTV and Comedy Central.

Cathcart hopes the original idea that started this project will touch viewers.

“As a group we were able to create something that reflects on how we feel about this world and how we could potentially change it. I want people to see how ridiculous it is that we find it awkward to talk to strangers on the street,” said Cathcart. “At the end of the day it’s just a conversation — and by striking a conversation, there is really nothing to lose.”

All practicum projects will be shown at a friends-and-family screening in March.

This corrects an earlier version of the story which said, incorrectly, that the project was inspired by the viral video, Look Up. 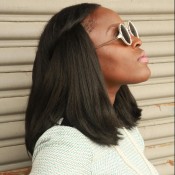