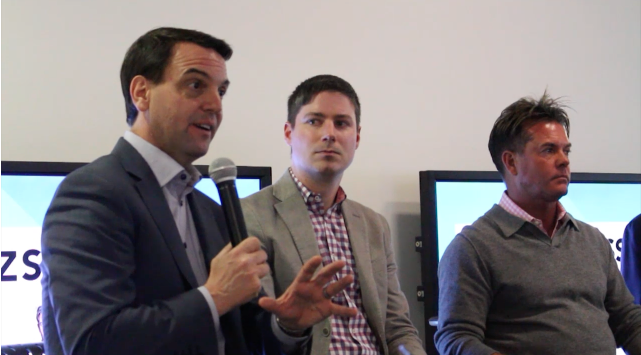 Left to right: Tim Hudak, Chris Schafer and Grant Brigden discuss the sharing economy at the DMZ, Feb. 10, 2016. (The Ryersonian)

Ahead of a debate on his bill to fully recognize the sharing economy, Conservative MPP Tim Hudak dropped by Ryerson to encourage students to take advantage of the shift toward collaborative consumption.

Hudak put forth a private member’s bill in the provincial parliament last October to fully recognize sharing economy industries like ride-sharing, home-sharing, and parking-sharing as legitimate businesses. He said that these industries are key to fostering economic growth.

The sharing economy provides new opportunities to young entrepreneurs, and allows consumers to be in control of their own destiny, said Hudak at the DMZ on Feb. 10.

Uber. Airbnb. Rover. These companies are a part of the sharing economy; businesses built on the sharing of resources, allowing customers to access goods without ownership.

The DMZ hosted a panel discussion on the evolution of the sharing economy, startups’ opportunities, possible challenges and ways to capitalize on new sources of revenue.

These new companies are challenging the status quo, said Chris Schafer, a policy lead from Uber, who spoke at the panel.

Schafer said the sharing economy allows people to access “the world in real time and share resources that you no longer have to own.” It allows people to earn money from the assets they already own, like their car (Uber), house (Airbnb) and driveway (Rover).

The sharing economy is generating millions of dollars in annual revenue. According to Business Insider, Uber reached  an annual revenue of $10 billion in 2015 and continues to expand globally.

An Angus Reid Institute online poll has found that more than 70 per cent of the respondents said that they are open to Uber operating in their communities. Uber is easily accessible and more affordable than regulated taxi services.

“Time and money have always been an issue for me as I don’t have enough… (The sharing economy) has helped me on a daily basis, making my life much easier,” said Lucas Yoon, a third-year commerce student at the University of Toronto.

The sharing economy has been created largely as a response to the global economic recession. Airbnb, for example, was created in 2008 by Harvard grad Nathan Blecharczyk who got the idea for the website after setting up air mattresses to house people attending a conference in San Francisco.

Ali Jiwani is a recent graduate of the University of Western Ontario and a co-founder and CEO of MealSurfers. He is doing exactly what Hudak hopes of young entrepreneurs – creating a business based on the sharing economy platform. MealSurfers is a food-sharing company that allows customers to enjoy affordable, authentic home-cooked meals. Customers can simply browse through local cooks, select their menu and pick it up or have it delivered.

Jiwani explains that sharing apps, like his own company, provide a win-win situation. “The cooks earn money with their talents and the customers buy cheap and better food,” said Jiwani. “The secondary benefit is creating a sense of community that is hard to find in today’s society.”

Five tips for success you need to know before midterm season