BREAKING NEWS
BREAKING: Ryerson’s spring convocation postponed to fall
Mixed emotions from students working from home during COVID-19
How young people are coming together during COVID-19
A user’s guide to closures and cancellations in Toronto during COVID-19
Toronto innovators launch new phone line for COVID-19 updates
Arts & LifeHumans of Ryerson

Just a short distance from Yonge Street, one of Toronto’s most well-known streets, lies Ryerson’s main drag, Gould Street. Though it’s commonly used to shuttle between school buildings, Gould is more than just a thoroughfare — it’s a place where passersby pause.

Here are snippets of what people are thinking about this week: 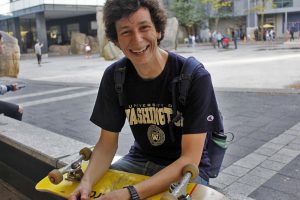 “In my final year of my undergrad I was a research assistant for my professor, who was working on a database of amateur films and filmmakers. And that put me in contact with a lot of archives and sort of made me aware of the nature of archival work and the need for archivists to start digitally, or in other ways, preserving films … We also had a collection of 16mm films at the University of Calgary that I did a directed study on … There’s tons of stuff that’s been sitting in archives that hasn’t been put on a digital platform for people to view it … There are jobs out there, it’s not something that I’m concerned about really cause I feel like going to school solely for the prospect of getting a job after is just stupid and defeats the point of education. But I also have student loans to pay off, so obviously getting a job is something that would help … I definitely have ideas. Skateboarding, photography and filming have always, since skateboarding’s conception, been linked in some way, whether it’s documenting it for magazines or creating videos. There’s really not a lot academically written on skateboarding photography or videography so that’s definitely something that I’ve pondered in the past, like is there some way I can do something with this? But that’s like a distant dream sort of thing.” 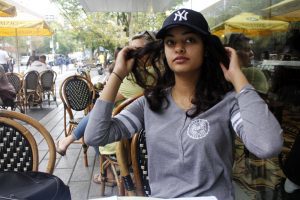 “I feel like accounting and finance have more money in it … I wanted to go into fashion at first, I applied to Ryerson’s fashion program too. I got into their communications program, but I didn’t end up going through with it because my mom was like, ‘you’re not going to make any money blah blah blah blah blah’ — you know how parents are.” 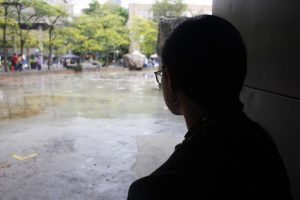 “I was smoking, I didn’t want anyone to catch my second-hand smoke so this is the perfect spot … I suffer from anxiety and depression and it was pretty bad like two years ago. I’m actually doing fine now. People watching is my solution for that I guess, to get used to people … You can see tons of emotions in people’s faces, it’s kind of fun. I can sort of feel what they feel in that moment.” 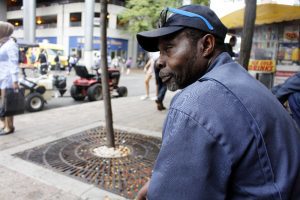 “You get the rough days and you get the smooth days and you just take everything you get … I’ve been here for about 30 years … but don’t worry, I’m close to retirement. I’ll be back and forth between the island and here. I’m from Trinidad & Tobago … I know a lot of people around campus, I have a lot friends. I see the new sets of students come in, study, leave and new ones come in … Life is good, people are good … I don’t like to sit in one place, I like to move, so this is pretty good what I’m doing now all over the campus.” 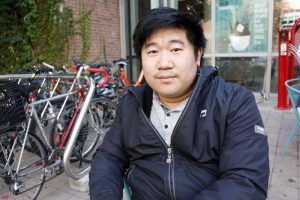 “I’m [on campus] to meet some old friends I recently graduated with … I knew them since first-year university … I miss their company… I would be the person [in our group] that’s level headed, tries to be the right-man. If everyone’s throwing around crazy ideas I’ll be like ‘guys, we kinda need to get this done, let’s not go over the top’… I like to fill the role that no one else is filling, so if we don’t really have a hype person I’ll fill that in … I just like to fill a niche that’s not been taken up or something that’s needed … In my family, I’m the youngest of the youngest … I like to keep quiet, keep my head down. If someone asks me a question, I answer. But I don’t really take the initiative to try and ask them things myself … I wouldn’t interact with my friends the same way I do in front of family because there’s the pressure for my [Chinese] heritage. If you’re the lowest in the family, you’re very polite to your elders, you don’t act up  — you try to not embarrass them essentially. But, with friends, I don’t really have the pressure to act a certain image and I can be whatever I want or however I want according to the situation.” 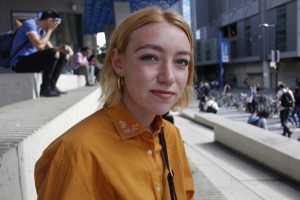 “I think technology opens up a whole other world to explore. A lot of people say that there’s stuff you can’t make in real life but you can make it real online … Right now I’m thinking a lot about internet security and how much we’re actually showing online. You think you’re just going to a website, but really it’s tracking everything you do … You’ll see ads on the side for shit you already looked up … You’re sharing so much more than you think … People don’t care. Now they have that face scan thing on the new iPhone … What the hell are people going to do with that? I don’t think I’m as paranoid as I should be. Most people should be more concerned with what’s going on … It makes me wonder, too, why don’t I care about it more?”