Porter was a keynote speaker at Covering Disasters: A Critical Lens, a Ryerson University journalism conference held on Tuesday. 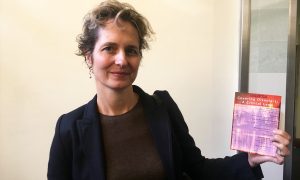 Catherine Porter, a New York Times journalist based in Toronto, poses with a Covering Disasters: A Critical Lens conference pamphlet after her keynote address on Nov. 21. (Photo by Maggie Macintosh)

“As long as you’re decent and human, that’s the most important thing to do,” she said.

Porter talked about what her experience was like covering the earthquake that hit Haiti in 2010, which she said immediately forced 1.5 million people out of their homes.

More than 220, 000 people were killed and over 300, 000 injured in the disaster, according to Oxfam International.

Porter said she remembers her first 10 days reporting on the ground in Haiti, with her colleague Brett Popplewell, where she went days without sleep and ate nothing but granola bars.

The 2010 earthquake, which was a 7.0 on the Richter scale, is the only natural disaster Porter has  ever reported on. It’s a story she followed for months.

Seven years later, she said her earthquake stories remain the most powerful she’s ever written.

Porter’s advice to young journalists is not to separate personal emotions from the professional responsibility to report objectively.

“I think that’s an old school of journalism,” Porter said. “If I’m covering something like an earthquake and have no emotions, I am burnt out.”

Ammar Karam, a first-year journalism student who attended Porter’s talk, said he’d leave his emotions out of his reporting if he were to cover a disaster, but he acknowledges every journalist is different.

“People underestimate how much of a toll reporting disasters puts on a human psyche,” he said. “(Porter) cried, and I feel for her, it must’ve been tough.”

One of her sources left an impact on Porter great enough to convince her to enrol a three-year old girl and two of her neighbours in school. It happened on her second trip to Haiti, where she reunited with Lovely, a young girl who survived the disaster miraculously after being pulled from the rubble of a building that collapsed in front of her.

Porter told the audience she first made the decision to pay $385 to send the three girls to school on one of her days off. She didn’t do it as a journalist.

But, at her editor’s request, she later wrote a column about her decision, which was published on April 30, 2010. In the column, Porter wrote she’d never done anything like that before.

“As a journalist, I’ve been trained to remain impartial, getting involved only so far as the story demands and then leaving, untouched,” she wrote. 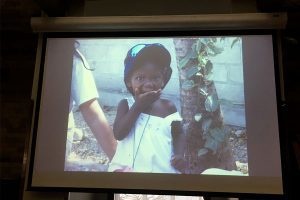 A photograph of Lovely, a young girl from Haiti who reporter, Catherine Porter, enrolled in school shortly after the 2010 earthquake, is projected at the Covering Disasters: A Critical Lens conference on Nov. 21. (Photo by Maggie Macintosh)

Porter told the Ryerson audience that while the initial reaction from many of her colleagues was frustration that she’d crossed a line by sending the girls to school, the Star newsroom later joined in—as did readers—in the efforts to support earthquake victims.

“Instead of impartiality, our mantra became transparency,” she said.

The Ryerson Review of Journalism (RRJ) put on the day-long conference.

“My goal for journalism students and journalists to take away from the conference today was to broaden and further their understanding about disaster reporting,” Goldfinger said.

The masters student said the most important things Porter talked about were the importance of doing research before covering disasters, treating victims as humans and learning to let yourself be affected by the disaster as a journalist.

“The stories that you’re hearing, especially if they’re from victims of trauma, are going to affect you in some way,” Goldfinger said. “We are human and these stories do affect us so I think it’s important to let yourself be vulnerable and know that you don’t always need to separate yourself.”

The event included various panels throughout the day on topics including disaster reporting preparation and taking photos during traumatic events.

Cliff Lonsdale, one of the panelists in the How Do Newsrooms Prepare discussion, said journalists need to come up with their own coping mechanisms when it comes to tackling stories about disasters.

Lonsdale, president of the Canadian Journalism Forum and a former chief news editor, said the brain needs time to process things so journalists should make time to sift through their thoughts.

“I think we get much better journalism when (journalists) admit (they’re) human,” he said.

In an interview after her address, Porter told the Ryersonian she cried regularly in Haiti but that the mediation between her source through a translator created some emotional distance during interviews.

While reporting at home, she often cries.

She said one of the first stories she ever covered as a budding journalist was a story about a house fire where a little kid had died. She spoke with the child’s mother, who was flipping through a charred family photo album throughout the interview, and she wept the whole time.

“I think (sources) recognize true empathy. They don’t see it as a weakness,” she said.

“In fact, I think they feel that you’re really hearing them and it would benefit your reporting as opposed to hindering it.”