Iconic Sam the Record Man sign to glow once more 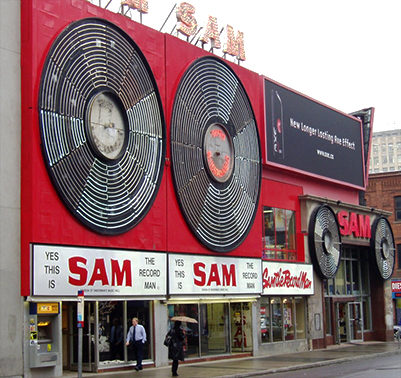 Ryerson is on the hunt for a company to restore the famous Sam the Record Man sign that once flashed in neon at its flagship shop on Yonge Street before being overtaken by the Student Learning Centre (SLC).

The university has put out a request for statements of qualifications and companies are now able to bid on restoring, rebuilding and remounting the sign atop the Toronto Public Health building at 277 Victoria St.

“When Ryerson is going to purchase any expensive service, we issue a request, letting the business community know that we have a need,” said Michael Forbes, Ryerson’s media relations manager.

Companies must submit a proposal outlining their qualifications to complete the project, detailing who they are and what kind of similar projects they’ve done.

Forbes says there is a list of criteria each company must meet and those who best qualify will be shortlisted before a final decision is reached.

The record store, owned by the late Sam Sniderman, closed permanently in June 2007, and Ryerson took control of the building shortly after in January 2008.

The sign has been stored in a tractor-trailer, dismantled into pieces, by Gregory Signs in Concord, Ont., for the past eight years while many have been awaiting its return.

When Ryerson overtook the building in 2008, it was granted permission to build the SLC under the condition that the sign be preserved and restored as city heritage.

The original plan was to hang the sign on the SLC building, but Ryerson balked due to what the university says are safety and esthetic concerns from the university; council then voted for it to be installed atop the Toronto Public Health building at Ryerson’s expense.

“Right now, we don’t know the cost or how long it will take,” said Forbes, who looks forward to seeing the sign back up and lit once again. He noted that the proposed costs of the restoration would be a large factor of their final decision on which company installs the sign.

Many look forward to seeing the iconic sign shining again, particularly in such a prominent space facing Yonge-Dundas Square.

Opinion: ‘If it were up to me, those read receipts would be gone’