If Ryerson’s smokers are trying to quit, they should take a vape hit 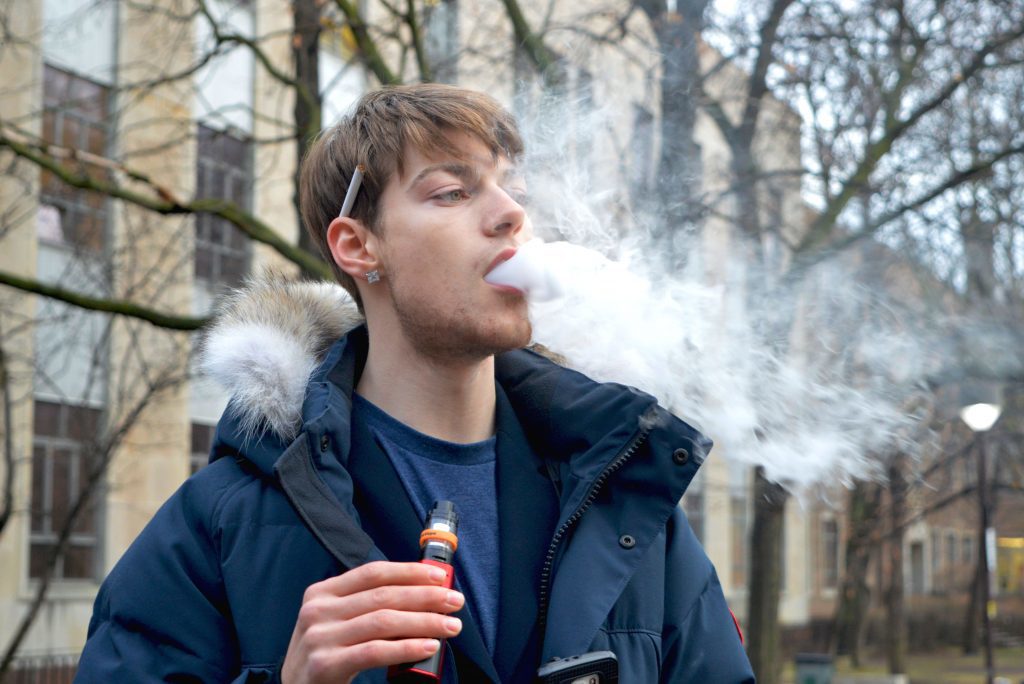 Canadian students seeking refuge from tobacco products should be looking to a new cloud of smoke — or rather vapour. The use of e-cigarettes, also known as vapour cigarettes or vapes, have been steadily on the rise in Canada and the evidence proves there is good reason.

The University of Victoria has released a comprehensive report that reinforces the notion of e-cigarettes as a successful form of harm reduction. “The idea that you could have a low-risk cigarette has been anathema to public health for years,” said principal investigator Tim Stockwell from the University of Victoria. “Tobacco has been notorious for having killed more people on the planet than almost any other substance that we’ve created — and for recreational use.” The study, carried out by Victoria student Renee O’Leary, investigated a number of hotly debated aspects of the e-cigarette and its function in helping smokers quit tobacco.

The study revealed that e-cigarettes contain only 18 of the 79 common tobacco cigarette toxins. In addition, the exposure to vape “smoke” —  which isn’t smoke at all due to the lack of combustion —lacked any significant carcinogenic relation.

The study found no proof that using e-cigarettes would act as a precursor to trying actual cigarettes, or other harmful substances — especially for kids.

That’s been one of the main concerns of e-cigarette opponents. An analyst for the Canadian Cancer Society, Rob Cunningham, said a primary worry with vapour products is not just smokers using them, but their influence on youth culture. “We’re not calling for a ban on e-cigarettes, but we don’t want kids using them,” he said.

But in the UVic study, called Clearing the Air, Stockwell found that there were almost no instances of users transitioning from vapour products to tobacco.

“That’s the kind of thing you would expect to happen, but it’s nearly always the other way around,” said Stockwell.

In Clearing the Air, the evidence confirms that vapour products should serve to ease those concerns. “The available evidence is that tobacco use by youth has been declining while use of vapour devices has been increasing,” the study reported. Statistics show that Canadian youth smoking has dropped almost two per cent since 2013; in that period vapour use has become increasingly prevalent.

Matthew Liegghio, a fourth-year real-estate management student at Ryerson, tried vaping to positive effect. “ I definitely felt much healthier as I wasn’t smoking cigarettes throughout the day,” he said. After months without tobacco, it wasn’t only his lungs that noticed the decreased strain. “My appetite wasn’t suppressed after having a cigarette as it usually was,” said Liegghio.

Ultimately, vaping didn’t lead him to quit tobacco. But he said it was his approach, not the e-cigarettes, that failed him. “I continued to vape at high nicotine concentrate, which caused my body to crave more and more,” he said. “If you plan on quitting, you are supposed to lower the nicotine content gradually, which will eventually suppress your body’s craving for nicotine.”

An industry spokesman said there is proof that, if used properly, the e-cigarettes do work to help people quit tobacco.

“There is a strong body of evidence that suggests 12 million people worldwide have used these products to quit smoking,” said Daniel Walsh, founder of Purebacco vapour products. “Peer support is very powerful in the smoking cessation process,” he said. As a former smoker, Walsh said the communal aspect of vapour culture is working in positive tandem with harm reduction to instil positive lifestyle habits.

One U.S. advocate said one of the reasons legislators oppose e-cigarettes is because they lump them in with tobacco.

“There are many people that think that because they are opponents of cigarettes and smoking that they should also oppose vapour products,” said the president of the American Vaping Association, Gregory Conley.

Conley has been dealing with American state legislatures for years, educating the nation on the potential health impacts of removing tobacco carcinogens and using vapour products. “If there are any concerns it’s that there’s more science to be done,” said Conley.

Stockwell argues for another kind of change in thinking.  “I would advocate not only loosening restrictions on it, but making it possible for doctors to prescribe it,” said Stockwell. “People with low incomes and other health issues are using so much of their funds on cigarettes, and they can’t afford to get started on these products,” he said.

For those who can afford to invest, the change pays off. Another Ryerson business-management student, Daniel Rea, quit smoking three weeks ago. “Right now I’m saving about $200 a month by vaping and not smoking,” he said. After smoking one pack a day for six years, he’s decided to choose a healthier lifestyle he said, even if the changes aren’t immediately apparent. “So far I don’t really notice any health benefits but most of the benefits I’ve felt are not smelling like a piece of garbage and having better breath.”

Currently, the American government considers electronic cigarettes to be tobacco products.  That is set to change next year, when the FDA will become the enforcing body behind production and sale applications.

“Over 99 per cent of vapour products available today in the U.S. will be banned under the FDA’s regulations, on Aug. 8, 2018,” said Conley.

That runs the risk of driving  the vapour market underground, something Stockwell has seen in Canada and hopes to avoid. “It would be great if there were regulations so that the products available were the safest ones, because it’s not well regulated,” said Stockwell. “They’re not all as safe as each other.”

There are a number of chemicals present in e-cigarettes that have not been tested over an extended period of time. Included in that concern is the efficiency of vapes in delivering nicotine, with a speed far greater than cigarettes. However, medical effects of nicotine addiction remain far less substantial than those of cigarette carcinogens.

“I’ve got chain-smoking relatives in England. Next time I go there I’m going to bring them free (vapour) kits,” said Stockwell. “I’ll give them to them as presents. Stop smoking, it’s bad for you.”

Who’s left out of the Ontario student grant?

I smoked for 38 years, nothing I ever tried was successful. I was completely, hopelessly addicted. 3 years ago, my mother died of COPD, and I decided to try again–but this time, I bought my first ecigarette–an old eGo style. I was amazed, because it worked- I never, ever bought another pack of cigarettes, I finished my old package–in fact, there’s still one old dead cigarette here to remind me I did it–this works perfectly for me, and I would be absolutely bereft if we lost the ability to vape. I will NEVER smoke another cigarette–but I will vape till I can’t anymore.

I had tried to quit close to 20 times before I found vaping, and more specifically the right vaping setup. Without e-cigarettes I would still be smoking 1+ packs a day and on my way to an early death with cigarette in my hand. I went from having a chronic cough, not being able to breath most days and needing multiple inhalers just to get through the day to not needing any inhalers and feeling great, my cough is gone and in the 2 years since I quit I can only remember having one cold.

I used vaping to quit smoking. I went from 2 packs a day for 20+ years to nothing on the same day and it didn’t phase me. Cigarette free for 3 years now and my kids are happy because of it.

Almost 5 years clean and vaping and i feel great! And along the way we’ve helped others quit as well. The benefits sure out-weight the alternatives to choose from. They work!!!!!!

Hooray! Canadian researchers are at last coming forward with the truth! I started smoking when I was 19 — back in the Dark Ages when almost everyone smoked. Over the decades, I tried everything to stop my pack-a-day habit, with very little success. (I stopped cold-turkey three times and it worked for 2-3 years each time, but I packed on the weight and the only way I could lose that was by smoking again!)
Almost 3 years ago, I heard about vaping and bought a starter kit. I had my last cigarette while the battery was charging. I haven’t missed smoking for a second, and I haven’t gained weight.
I love the flavours — I have a collection of bottles with dessert, candy and fruit. I can still enjoy the sensation of holding something in my hand and the calming/energizing effect of nicotine (which is not harmful when removed from the chemicals in tobacco cigarettes, and is actually beneficial to brain functioning), although I use a nicotine strength only 1/4 of the strength when I started.
Vaping can save lives and make millions of lives a lot better!

Vaping is poised to be either the second largest mistake on the the part of politicians or the biggest lifesaving invention of man kind. Now let me clarify when i said mistake i wasn’t referring to any of the reported fears of the unknown that you hear about trying to scare public opinion in to regulating it out of reach thereby maintaining the status quo for the tobacco companies. What i was referring to was the ability of the masses, so heavily bombarded by useless content that the right decision is left by the way side. I’ve seen vaping not only save people from the terrible insidious nature of self harm by way of combustion but also provide opportunity , inspiration, and a new lease on life. Myself included. When some one suddenly realizes that they haven’t had a smoke for a day , week, month well there’s nothing that isn’t in the realm of possibility at that moment.

It continues to baffle ones mind as to why our government hasn’t reached out to the likes of Public Health England or the Royal College of Physicians London to engage in conversation and wrap their heads around their conclusions that vaping is 95% safer than that of smoking. Ask yourself why? Or why do they automatically just ignore this information along with other public health groups here in Canada. University of Victoria now being ignored too? Gagging information? Ask why.