In Pictures: Ouch! Hundreds down for the (thread) count at International Pillow Fight Day

In Toronto, about one thousand were set to attend International Pillow Fight Day according the official Facebook event page. Hundreds showed up despite cool winds and weather reports warning against potential snowfall. The two-hour battle had a superheroes versus villains theme and was hosted by event organizer Newmindspace and Toronto-based festival Atomic Lollipop. The first International Pillow Fight Day was organized loosely online as a flash mob in 2008 and occurred in less than 30 cities. 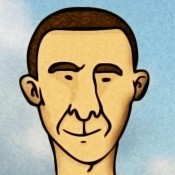 Matt was one of the Ryersonian's two photo and graphics editors for the second half of the winter 2014 semester. He graduated from the Ryerson School of Journalism in 2014.

Matt was one of the Ryersonian's two photo and graphics editors for the second half of the winter 2014 semester. He graduated from the Ryerson School of Journalism in 2014.

Why some students don’t tune in to music award shows

Suit Up For Success event dresses students for free