The political landscape in America is hard to talk about right now. When people find out I’m American, the first question they ask is, “What do you think about Trump?”

Most people, I’m assuming, ask me this thinking I’ll agree that he’s the worst thing that’s ever happened. But when I don’t agree, they get angry and confused; they start telling me I don’t have morals, and consequently, they express that I’m a horrible person.

When these people say I shouldn’t vote for a party of old, white men with outdated views, I want to say they’ve got me misunderstood. Now, don’t get me wrong, some of the things Trump says and does chill me to my core, but I won’t vote for a certain party just because it’s one Trump doesn’t belong to. And earlier this month, I think the U.S. midterm elections saw similar thinking from many Americans.

Throughout the campaign there was minimal talk about what the Democrats were planning to change if elected. Though this wasn’t a presidential election year — midterm elections take place halfway into a president’s four-year term — when I asked voters if they knew where the Democratic party planned to focus efforts, they said, on “the opposite of what Trump would do.”

In the weeks and months leading up to the midterm elections on Nov. 6, there was a ‘blue surge’ in the media — a swell of support and coverage for the Democratic party. Almost every time I went online or turned on the TV, there was a new celebrity endorsement for a Democratic candidate, or a Democratic campaign commercial refuting something Trump had said. These commercials were rooted in anti-Trump rhetoric. There was some talk of policy but mainly, they tried to pressure Americans to vote for the party against Trump.

Running a campaign on the basis of criticizing your opponent isn’t a new concept. But when that takes precedence over actual talks of change and policy, voters remain uninformed.

Fellow millennials discussing U.S. politics with me defend their left-wing views with screams at my Republican views. But when I ask them what they agree with on the opposing side, most can’t name three policies or beliefs.

This exact notion came back to bite the Democratic party — and its voters — during the recent midterm elections. Yes, they took back the House of Representatives, but they only flipped 32 seats. For comparison, in the 2010 midterm elections, halfway through President Barack Obama’s first term, the Republicans flipped 63 seats to regain control of the House. They also flipped seats in the Senate and gained the majority of state governor positions as well.

At every midterm election, it seems Americans vote for the party opposite the one in power, to stop whatever progress the seated president has planned. While this hinders bills from being passed between presidential elections, it’s not a viable long-term solution. The better solution is to research who you’re going to vote for in the first place, so the branches can work together to get things done.

It’s important to vote in the midterm elections, but what’s even more important is keeping yourself informed about candidates running for important government positions. Voters have to do their research to make informed decisions that promote real change. It’ll take a lot of time and effort, but you’d think the fate of the most powerful country in the world would be worth it. 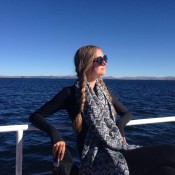 A Chicagoan living in Toronto that likes to write.

A Chicagoan living in Toronto that likes to write.