It’s a Friday afternoon and 10 players from the women’s basketball team have congregated onto Coca-Cola court in the Mattamy Athletic Centre. The season is over but preparation for next year is already underway. The assistant coach is leading the drills today, having the players work their way through agility ladder exercises. Head coach Carly Clarke watches over, offering the occasional suggestion to a player. It is when the group is divided in half for net drive drills that Clarke gets involved. As player after player practices going to the hoop, Clarke is the obstacle in their way as they try to dribble around her. She’ll occasionally stop her group to offer advice but for the most part, she spends the next half-hour helping her players get better by being an opponent.

In 2012, Clarke was hired as the head coach of the women’s basketball team. Under Clarke, the Rams have made the postseason in all five seasons, including 45 wins in the past three regular seasons combined. She led the team to an OUA championship and a CIS Final 8 silver medal in 2016, the first Ryerson team to go to a national championship final. Ivan Joseph, the director of athletics at Ryerson, estimates Clarke beat out between 50 and 100 people for the job.

“She’s reached the expectations that I had quicker than I thought she would,” said Joseph. “I always knew she would be an excellent coach. But I didn’t think she would achieve the goals that she has achieved so quickly. She has a keen basketball mind, doesn’t settle and has made us a national powerhouse. She’s made us instantly recognizable among the best by claiming an Ontario championship and heading to nationals, winning the silver medal in just her second chance.” 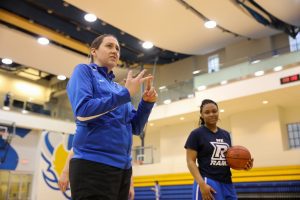 Clarke grew up playing basketball and got into coaching through camps and summer teams while she was still playing. She graduated from Bishop’s University with a degree in biology. Unsure of what she was going to do next, Clarke got the opportunity to join the university team as an assistant coach, where she realized she loved coaching.

Watching Clarke coach, she is not one to rely on yelling and screaming to get the message across. She said that while she tries not to coach with punishment or consequence, Clarke admitted she has to sometimes create a more competitive environment. Her coaching philosophy is rooted in understanding, and as a former university basketball player herself, she hopes she can guide and connect with her players in that capacity. She likes to coach in a way where the athlete understands why they are doing something and hopefully they’ll be driven to want the outcome.

That understanding has led to high-level players joining the Rams. Kellie Ring, an OUA champion, CIS bronze medallist and two-time OUA First-Team All-Star during her four years with the University of Ottawa, used her last year of OUA eligibility to play for the Rams. While pursuing a master’s degree in digital media at Ryerson was her number one priority, she said, “The fact that Ryerson has a strong program really helped. I knew Carly had a lot of expertise and a lot of knowledge and is very laid back and easy to get along with. And has clearly done something right in the past because the team has only improved each year and so I knew this was a program I wanted to be a part of.”

Ring said that Clarke instilled a confidence in her by giving her freedom to try new things and working with her in the summer.

In addition to her time as a university coach, Clarke has established herself with Canada Basketball. Currently the head coach of the junior women’s national team, she started as the apprentice coach with a program called the National Elite Development Academy, a centralized, year-long program involving high school athletes in Hamilton, Ont. She has won multiple medals with the national team, including gold at the FIBA Americas U16 championship for women, the first championship for Canada in the age division.

Mike Mackay, the performance manager for Women’s High Performance at Canada Basketball, has known Clarke since she was 13 years old and has helped guide her throughout the years. “Carly has always been willing to reinvent herself,” said Mackay. “In other words, she’s not satisfied with just staying where she is. I first did a coaching clinic for her when she was in Grade 8 and even then she asked good questions and you could tell she wanted to be the best she could be. It’s her willingness to grow and learn, and she has a good eye for paying attention [to] what are the important things in a game … those are the signs to me … of being a high-level coach.”

Denise Dignard, the director for Women’s High Performance at Canada Basketball, added that “With the athletes, [Clarke] … can really get them to understand what’s required to become very high performing athletes at the very top level. Certainly demanding of them as well and in a really caring way but one that … pushes the athletes to be the best they can be both on and off the court.” 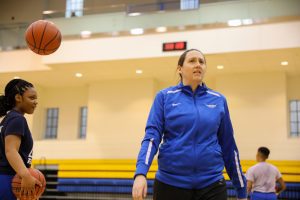 When asked for adjectives to describe Clarke, the one word Joseph, Ring, Mackay and Dignard all used was intense. They know how seriously Clarke takes the game and her desire to get better as a coach. On the flip side, Clarke admits she is “relatively introverted,” and that she is always trying to improve on her communication skills in order to build better relationships with her players. For Mackay in particular, he has noticed the growth in Clarke’s confidence throughout the years. “When you hear her speak now, [she has] confidence and she can clearly articulate what it looks like, sounds like and feels like at the elite level,” said Mackay. “She can make … clear for people what’s expected. I’d say in the past, she didn’t have that ability to clearly articulate those things. And sometimes, the confidence didn’t show in her voice.”

For Clarke, championships are not the only rewarding things to come out of coaching. “Some of the big ones are getting an email from a player after they graduate or at the end of a season, they’re thanking you for something or maybe … at some point I challenged them and they didn’t agree, something finally clicks and they start to recognize the experience it gave them and how they’ve grown,” said Clarke. “That’s always really rewarding for me, seeing a student-athlete grow and move on to something better.”

One high-heeled step closer to equality in the workplace