When first-year English student Mariam Vakani reached for her niqab Monday morning — preparing for her first day back to school after Friday’s terrorist attacks in Paris — her hands wouldn’t stop shaking. During the commute to campus, Vakani felt the passersby glaring at her.

Vakani shared her experience at Coping with Tragedy, an open event held by the Ryerson Muslim Students’ Association (MSA) on Monday, where students gathered to discuss how recent tragedies abroad and misconceptions of their religion and identity were affecting them.

For the MSA, these conversations are a way to cope with and challenge Islamophobia — a growing prejudice in Canada with negative views of Islam held by a majority (54 per cent) of Canadians, according to an Angus Reid poll.

In the days after the Paris attacks, Muslims were targeted in Canada: a mosque was set ablaze in Peterborough on Saturday and a Muslim woman was assaulted while picking up her children from a Don Mills school Monday night.

These events trouble CESAR vice-president internal Rabbia Ashraf, who said she’s tired of the expectation that Muslims need to justify themselves or apologize after terrorist attacks.

“Every time this happens, my heart starts breaking,” she said. “I think: ‘Please don’t be a Muslim person.’

“Rather than talking about why terrorism exists and solutions in Canada … we’re hearing Muslim students saying sorry over and over,” Ashraf said.

Ashraf said Islamophobia is more pervasive than the standout violent incidents, citing an example of Facebook’s activation of safety reporting and solidarity features in the aftermath of the Paris attacks. No such features were made available for Beirut or Baghdad, which suffered their own murderous terrorist acts last week.

“I have a few friends who live in Paris, (who) were able to mark they were safe on Facebook,” Ashraf said. “I also have friends in Lebanon and Iraq, but they had no options.

“To be quite frank, Western media and social networking values European lives (more),” she said. 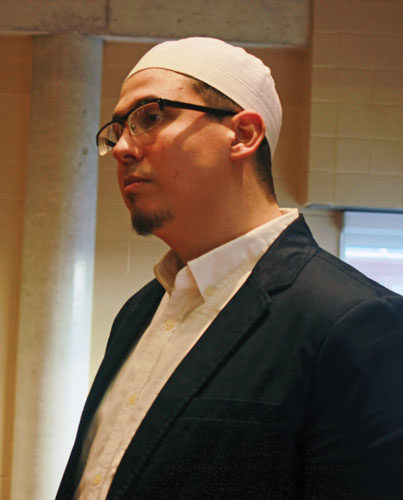 The guest speaker at the MSA event, the University of Toronto’s chaplain Imam Amjad Tarsin, acknowledged these are trying times for Muslims in Canada, but cautioned the students not to despair.

“Do people blame Christianity for the KKK?” Tarsin said. “There is insensitivity, but you don’t respond with more insensitivity.

“It becomes a cycle of feeling sorry for ourselves, (and) doesn’t actually compel us to do something.”

On Sunday, Ryerson graduate and Thaqalayn Muslim Association founder, Hassan Haidar, organized a vigil at Yonge-Dundas Square for the victims of global terror attacks. Riffing off the social media hashtag #PrayforParis, the event was dubbed #PrayforHumanity.

Haidar almost lost a friend in one of two attacks in Beirut on Nov. 12, the day before gunmen and suicide bombers struck Paris. His friend had left the busy shopping district 10 minutes before a suicide bomber killed 43 people.

Haidar is worried the events in Paris have unleashed the prejudice of some Canadians.

“We need to nip Islamophobia in the bud,” Haidar said. “We saw what happened in Peterborough … we have to be very vigilant and smart.

“While (Islamophobia is) not as deadly as other forms (of) racism, it’s starting to get there,” he said.