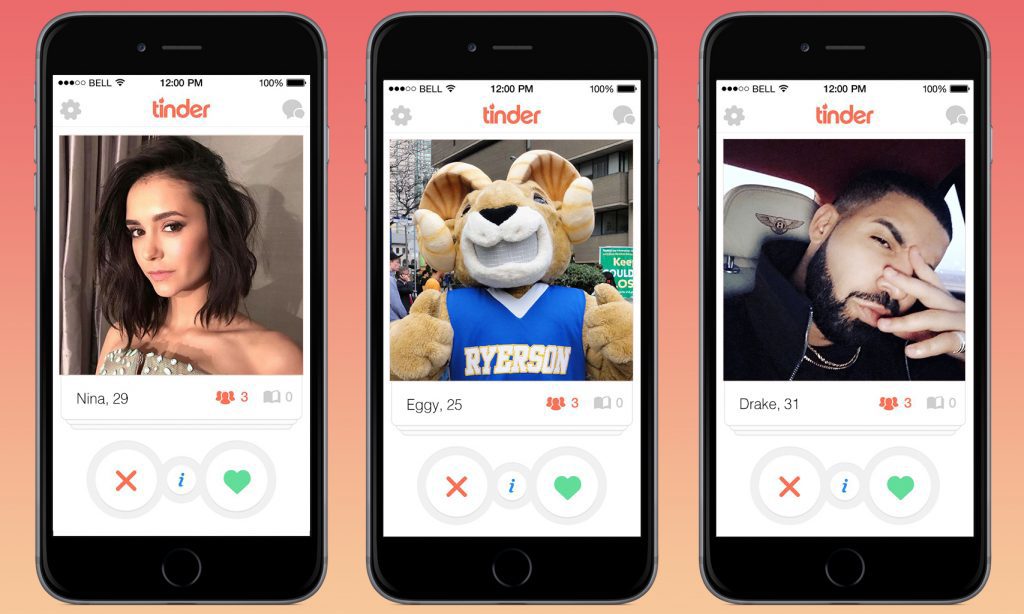 Alexandar Cheah and Jenn Lee’s first date was dinner and a movie. Sydney Wong and Matthaus Vasquez’s was dinner and drinks. Alison and David (whose names have been changed for privacy) went to the aquarium and had a coffee.

In all scenarios, these happy couples have followed well-established rituals of most happy couples before them — meeting, getting to know one another and spending more time together until, finally, becoming official. Except for one detail: they all met on Tinder.

These assertions aren’t very accurate — they actually tend to be sexist and judgmental in nature. But it’s fair to say that casual sex has become a more accepted part of modern dating culture than it was before. An act that once transpired surreptitiously and was only talked about, for the most part, in whispers, is now easily accessible and acceptable to anyone with a smartphone.

Through apps known for facilitating hookups, like Tinder, a couple of swipes in the right direction can now lead a person to hundreds of young, (hopefully) single people nearby.

However, one study in the interdisciplinary journal Telematics and Informatics found that young adults were using Tinder for six main reasons — among those, the top two were love and casual sex. And, interestingly enough, contrary to the app’s reputation, love seemed to be a stronger motivation to use the app than casual sex.

The findings point to a larger trend: young people — Ryerson students included  — are getting into serious monogamous relationships as a result of using Tinder, and seem all the better for it.

“Honestly, I was just bored,” said Wong, a fourth-year professional communications student at Ryerson University, on why she started using the app. “My last serious relationship (had been) over a year (at) that point, so I was casually on Tinder just meeting people, talking to people on and off, here and there.

“At that point in time, I was very firm on wanting to move after I finished school, so I wasn’t really looking for anything that might change my mind,” she said. “I really wanted to move to Vancouver.” 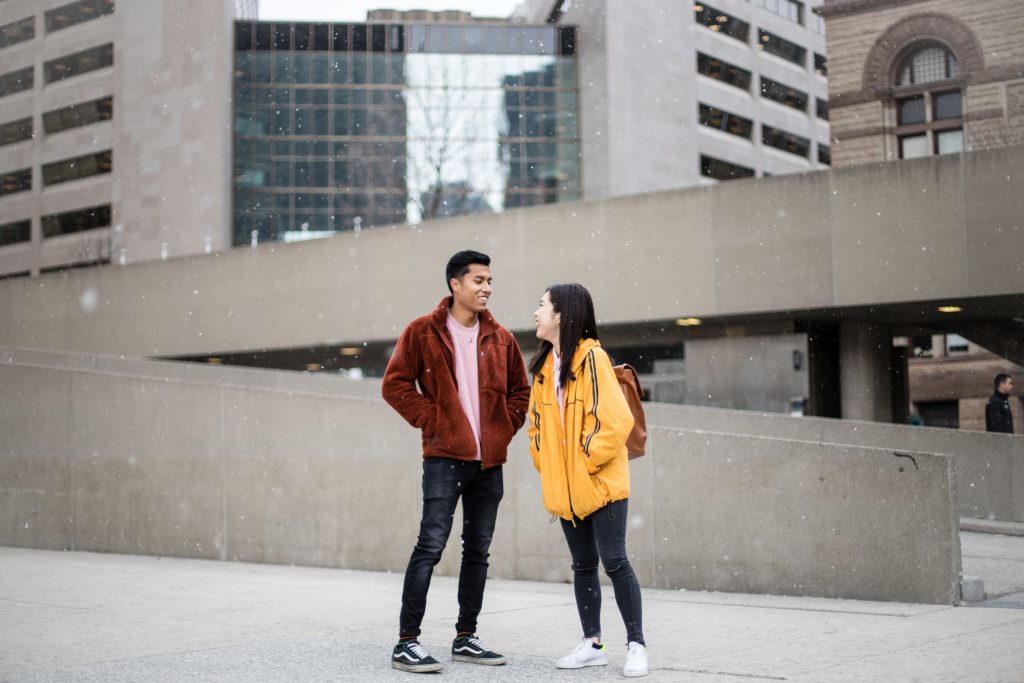 Matthaus Vasquez and Sydney Wong laugh together outside of City Hall on March 12, 2018. The couple met a year and half ago through the dating app Tinder. Photo by Janine Maral Tascioglu

Wong met her now-boyfriend Vasquez a year and a half ago. After matching on Tinder, they went to the chain restaurant Joey’s for dinner and downtown Toronto bar Track & Field for drinks. They’ve been together ever since.

First impressions are somewhat different when your first encounter with a person is through their curated online profile. Vasquez said the first thing he noticed about Wong was her “lit Instagram.” Wong remembered the first message Vasquez sent her was, “Yo, Sydney!” to which she replied, “Uh, do I know you?”

The couple’s conversations are littered with slang and references to memes and move fast, as they bounce ideas and memories off each other. As a whole, their relationship — both in how they met and how they interact — is a reflection of the quickly changing times.

“Especially on social media, you see a lot of tweets that are like, ‘Oh god, when our generation has children, they’re going to be like, “Mom and Dad met on Tinder.”’ You see a lot of memes with that shit,” said Wong. “I think about this a lot, actually.”

She mentioned that with the growing acceptance of feminist theory — and, similarly, movements like #MeToo — it’s becoming frowned upon to approach a stranger in public and ask them out. Wong said dating apps are easier to use because of their “implicit consent”— where, because they digitally “matched,” both parties knows that the other is at least somewhat interested. Still, the app doesn’t fix all issues of consent, as sexual assault cases continue to affect the app’s reputation.

And while it’s a good sign for a generation calling for enthusiastic consent in the dating scene, detractors may argue that these apps kill the mystery in the beginning of a relationship. 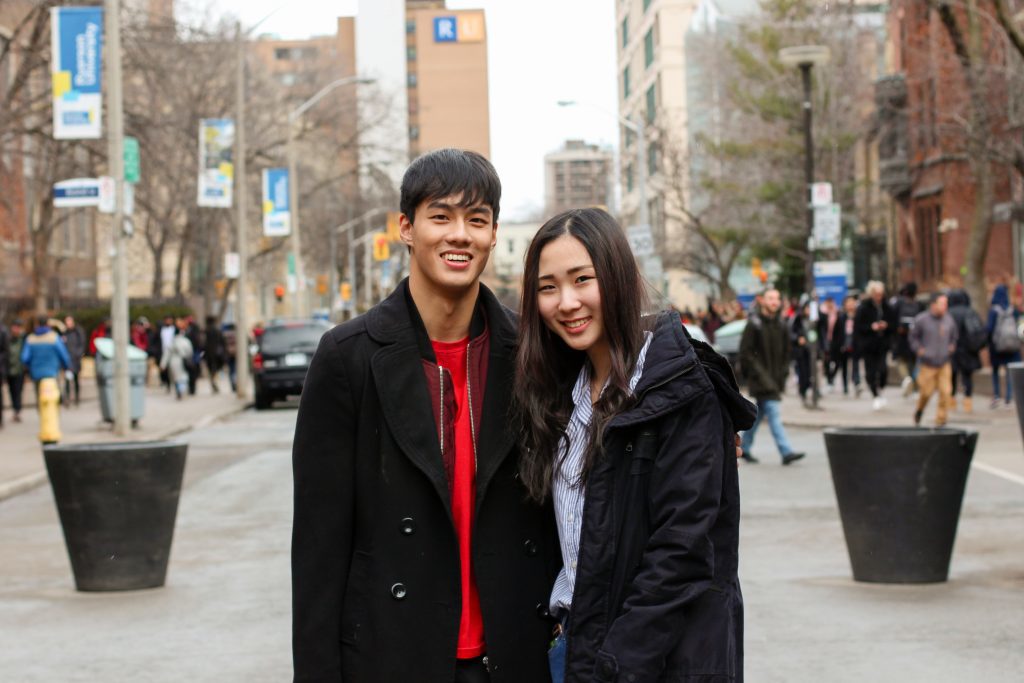 “I kind of thought she was interested in me from the beginning,” said Cheah, to which Lee laughed and defended herself by saying, “I already thought so, too.”

Cheah mentioned that Tinder made it easier for the two to start talking. He said, “I’m a very awkward person sometimes. On our first date, it was kind of awkward for maybe the first half-hour.”

And they say it would have somewhat changed the course of their relationship had the two first met in person.

“There’s so many students always around us, so when you’re going to classes with someone and constantly seeing them, you end up seeing them as more of a classmate,” said Cheah. “But when you meet them on Tinder, clearly, if you’re talking to someone, you definitely have intentions of some sort.”

Those intentions didn’t totally change how they interacted. On their first date, Cheah recalled, “I was trying to flirt with her and I told her, ‘Do you want to know a fun fact? Water goes counterclockwise above the equator.’”

Lee burst out laughing. “In the middle of dinner. I pretended to laugh.”

Some couples, no matter how happy, do still feel the stigma of having met on Tinder — which is the case for Alison and David. The couple met on the app two years ago, but only their close friends know that. The majority of their other friends or acquaintances have no idea.

“I think because it’s seen as an app to bang on, and we don’t want to be associated with that kind of connotation,” said Alison, a third-year Ryerson business management student.

Although meeting on Tinder is becoming increasingly common in long-term relationships, the stigma that many couples feel points to the app’s still murky reputation. Part of that reputation comes from accusations of sexual harassment and gender inequality against the company itself.

“Tinder is great because it’s normalized online dating and meeting people non-traditionally,” said Laura Bilotta, a dating coach and matchmaker at Toronto-based online dating service Single in the City. “However, I think it’s created a collective sense of ‘the grass is always greener.’ People have so many choices at their fingertips and … ultimately don’t give people a chance. It focuses on physical appearance rather than substance.”

Certainly having access to hundreds of people a swipe away can make dating more approachable, but also more complicated at the same time. There are no shortage of Tinder horror stories, both online and anecdotally. Amongst users, there have been reports of sexism,  racism and racial fetishization. At the same time, it’s difficult to posit Tinder as the main cause of these issues — racism and sexism have always existed on a societal level. Dating apps, like most modern technology, have just quickened the pace that these problems are revealed.

Despite the expectations and stereotypes still associated with the app, Wong said Tinder didn’t ruin the romance of dating for her. “I definitely liked him more than he liked me when we first met,” she said.

She mentioned that while she knew he was interested, it was still unclear exactly what he was interested in. “So you still can have that same kind of chase game where you’re still trying to figure out how everything’s going to play out.”

Vasquez disagreed. “When you both swipe right, you know (you’re both interested). I guess it’s not like you have to play those games.”

But is one way better than the other?

“They’re both fun either way. Both a good time.”

‘Even Canada calls B.S.’: Toronto’s March For Our Lives