As Jay Onrait and Dan O’Toole return to TSN to host their new show, SportsCentre with Jay and Dan, some of Ryerson’s first sport media graduating students credit Onrait for inspiring their generation.

“The most frequent comment I get is, ‘I grew up with you guys,’” Onrait said. “On one hand it makes us feel old, but on the other hand it’s very flattering.”

Onrait began co-hosting SportsCentre on TSN with O’Toole in 2003. After nearly a decade on the air, TSN announced that Onrait and O’Toole would be leaving SportsCentre to join Fox Sports 1 in Los Angeles. They returned to Canadian airwaves this month. 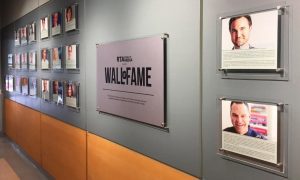 Ryerson’s RTA School of Media Wall of Fame along the halls of the Rogers Communication Centre features an extensive list of graduates that have gone on to become leaders in their industry. (Photo by Max Ciarmela)

Onrait started his career at TSN in 1996 as an editorial assistant before graduating from Ryerson’s RTA program in 1998.

Ryerson sources say that he inspired a wave of sports broadcasting students who aspire to have a similar career path.

“Jay proved that you can be an RTA grad and do great things,” said Sarah Jenkins, Ryerson’s play-by-play commentator for women’s hockey, and sideline reporter for men’s hockey and basketball.

“He broke into the U.S. market for a bit, which is very difficult, so it just proved to us young aspiring media professionals that anything can happen with hard work, even if your style is unique and different.”

Onrait is one of the most recognizable figures on the RTA Wall of Fame.

“I think it’s inspiring that the students can see somebody that went through the program, went through the same trials and tribulations they are going through in university and what they will go through,” said Laurel Walzak, an assistant professor in the RTA sport media program.

“They see him and realize that it is achievable and as they work towards their goals and they set the direction and focus, they will be able to achieve what Jay has and more,” Walzak added.

Onrait said he and O’Toole thought hard about the decision to leave TSN. Despite the huge fan base they created in Canada, Onrait said, “we didn’t want to be 80 and look back on our lives in our late 30s and say we could have gone to the states for four years.”

When Onrait and O’Toole started hosting SportsCentre on TSN in 2003, Mark Milliere, senior vice-president of production, put their show in the 2 a.m. EDT slot with a vision in mind.

“The vision was that young people in this country would grow up with us and watch us mostly in the morning,” Onrait said. “They would get up before they went off to school, they would watch our show, and over time it would be something of an institution to them.”

Onrait’s humorous style is what makes his approach unique.

“What you see on television is very much how we are off TV,” Onrait said. “I think it resonates with people because it’s just different.”

Onrait and O’Toole’s time at Fox Sports Live lasted until February of 2017, after which their contracts were not renewed.

Onrait has many fond memories of his time in the RTA program and says he is always interested in what Ryerson has planned next.

“It’s really interesting to watch, I don’t think I could have gotten into the school now and I think I’m pretty lucky that I got in when I did.”