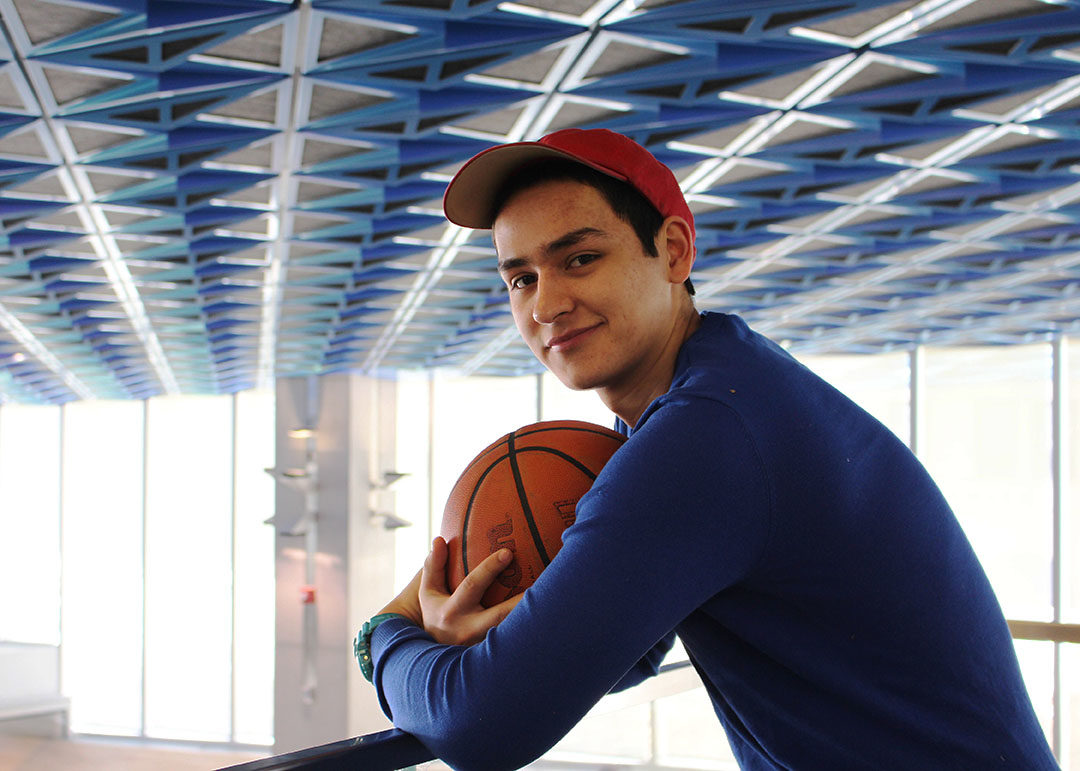 Luke Galati wakes up at 8 a.m. He packs his things, grabs his red baseball hat and is ready to start shooting his documentary.

“I wore this thing every single day,” Galati, a third-year Ryerson journalism student, says as he shows off the red hat.

Galati is the director of the documentary Eastern. His film will make its debut at the Toronto Short Film Festival this week, the first festival to have responded to his applications and accept the film. Eastern focuses on the Toronto high school Eastern Commerce Collegiate Institute, near Danforth and Jones avenues, which closed after the 2014-15 school year.

Eastern is special to Galati because the school is basically in his backyard. Its basketball program has produced some of the best players, most notably Jamaal Magloire, who was drafted into the NBA. As an avid basketball fan, Galati kept up with the latest news and players who came out of the school.

But dwindling enrolment numbers threatened the school. There hadn’t been a Grade 9 class since 2013 and the total population dipped to 62 students. Consequently, the school had to close.

When Galati heard about the closure, he was surprised.

“The school meant a lot to different people and it had a positive influence in the lives of many,” he explains. “It made it kind of a mythological tale of this school and I was just really interested in it.” 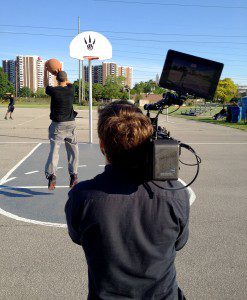 So Galati got straight to work. He began by writing a formal letter to the principal of Eastern. In it, he outlined why he wanted to shoot this documentary and what it would mean to him. He even delivered the letter in person, which he thinks gave him the upper hand over other media outlets.

“Not even CBC got the access we got,” Galati says. Although there were written articles about the closure of Eastern, none of them got to the emotional level Galati thinks his documentary reached. Most of his interviews were conducted inside the school, access no other outlet was given.

Galati, who is 20, says that his age may have played a big factor in that. While he’s not a high school student, he’s still young, which the students at Eastern could relate to.

Though Eastern is about the closure of the school in general, it focuses on four student basketball players. The players trusted Galati and his team, who were all in their 20s.

As a full-time journalism student, part-time worker at Ryerson’s Recreation and Athletics Centre and volunteer basketball coach on the weekends, Galati is a busy guy. Add to that, he’s a freelance writer for Panoram Italia and Ryerson student newspapers.

Oh, and this is the first documentary he has ever directed.

The 42-minute film was made by students in Ryerson’s film and journalism schools and it has a youthful edge. It was funded by the Ryerson Communication and Design Society (RCDS).

“To pay people, I was using all my OSAP money,” laughs Galati. “So it was a true student production, you know?

“It was cool to give people the opportunity to shine and do their craft and actually pay them. There’s so much work these days for free, so it was nice to pay someone for something I believe in.”

This was Galati’s first time paying people and, although Galati’s team made some cash, he didn’t get one cent. The money was split up between paying his team, making the documentary and applying to festivals.

“I wanted to give back to the community with this film,” Galati says. He was involved in all facets of the production process, even sitting in on every editing session after he hired an editor. “I did it because I wanted to do it. It was my passion project.”

His parents, both journalists, are his biggest mentors and inspired his passions. Galati said they always taught him to be an honest person and to take pride in what he does. His mother, Karen Kemlo, raised him as a single parent since Galati was three years old. She said he was always driven, even as a child.

“In preschool, Luke would get mad if he didn’t finish his puzzle,” says Kemlo, laughing.

When Luke talks about Kemlo, his already jovial smile lights up even more.

“She’s worked hard her entire life to support me,” says Galati, adding that his professionalism, manners and good grammar all come to him thanks to his mom.

“He was always so driven to complete the process,” says Kemlo of Galati’s work. She also said that he really started to find his “groove” when he started playing basketball. 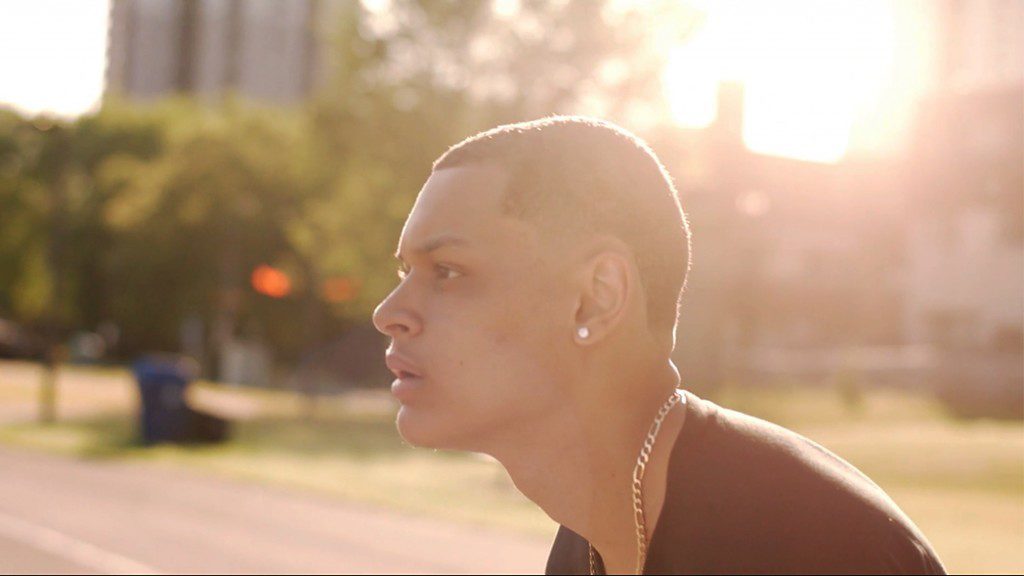 Basketball has always been a part of Galati’s life. From playing house league to rep for East York to attending summer camps at Ryerson and The Hoop Factory, Galati breathes the game.

“It’s a way to express yourself and build lifelong friendships,” Galati explains.

Along with his old coach Leo Bishop, Galati now coaches the very team he used to play for.

Bishop has known Galati for the last nine years and sees him two to three times a week, depending on East York’s game schedule. Galati “always had this bulldog in him,” Bishop says about Galati’s basketball skills, even comparing him to the Toronto Raptors’ Kyle Lowry.

“He always tried his hardest in practice and asked me what else he could improve on,” Bishop says. This is a crucial part of Galati’s character, as Bishop says all the players look up to him.

Galati’s sportsmanship seems to have translated well to his directorial skills, as he was able to bridge a collaboration between film and journalism students. Jacob Thompson, a Ryerson film student, worked on the documentary and says it was refreshing to see how committed everyone was to the whole endeavour. “I’ve never worked with people from another program … but it was a good learning experience for all of us,” Thompson says.

Robert Mackenzie, a journalism student and a close friend of Galati who also worked on the film, agreed that it was a great process. “There were no problems. We all realized how good the story was and how lucky we were to be telling it,” Mackenzie says. 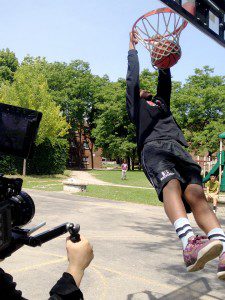 Although this is Galati’s first short film, he had his first taste of success with his YouTube video Northern Uprising. It documented the Toronto Raptors’ playoff journey in 2014. The video “showed me what is possible and made me more ambitious,” Galati says. It now has almost 13,000 views on YouTube.

“I saw I can be successful, so why not again?” he says.

Galati’s knowledge of basketball lends itself to the documentary’s appeal. He’s been a guest on Open Gym, a spinoff show associated with the NBA and the Toronto Raptors.

“It’s funny, when I’d be introduced, my title would be ‘Raptors fan.’ But maybe now that this film is done, it’ll be ‘filmmaker,’” he says.

Galati started work on Eastern when he was 19 and, over a year later, the film has finally reached completion. With a second round of funding from the RCDS, Galati is able to host a private screening of his film and submit it to festivals around the world. The private screening for friends and family of the crew, as well as the film’s subjects, will be held on April 3. All proceeds will go to the charity People’s Basketball. Eastern will be playing March 17 at 7:45 p.m at the Carlton Cinema to a sold-out auditorium.

“This is by far my favourite piece of journalism I’ve ever produced,” Galati says.

He’s only just beginning to flex his directorial muscles. Galati has already shot a documentary about the Northern Kings, another basketball team in Toronto. “Eastern was the past, this project is the future,” Galati says. Editing has not begun yet.

But the film will be released online once it’s done. He also enrolled in a TV documentary class for his final year of school and plans to try out for the Ryerson basketball team next season. And, of course, Galati wants to make more documentaries.

“At the end of the day, I’m following my dream and perfecting my craft,” he says. “You can’t buy that.”