Meagan Casalino started her freelance job at the Ottawa Metro on Nov. 20, but was laid off a week later.

“It’s kind of a sick joke,” said the third-year School of Journalism and Communications student at Carleton University. “I worked a total of eight hours and then I got fired.”

Casalino is one of many journalism students across the country affected by the layoffs because of the TorStar PostMedia newspaper trade. 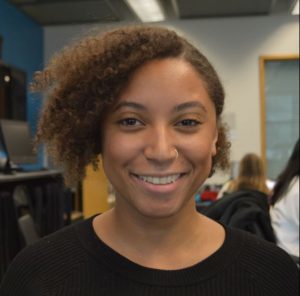 Nicole Edwards, a first-year in Ryerson’s masters of journalism program, says the news about more print closures is unfortunate, and it will push her to be as multifaceted as possible. Nov. 28, 2017. (Mah Noor Mubarik / Ryersonian)

The papers swapped 41 papers across the province and only five of them are expected to stay open.

“It was a really depressing day hearing about all the closures,” Casalino said. “There are people around me that are graduating and are looking for a job. It was just a slap in the face.”

April Lindgren, an associate professor of journalism at Ryerson University, has researched the importance of media in small towns and ran a conference about the topic in June.

“The impact of this [trade] is that there are going to be 300 fewer journalists covering communities and telling stories about their communities,” she said. “I think that’s a problem for the people who live there and they won’t know what they’ve got until it’s gone.”

Lindgren, with the help of a professor from the University of British Columbia, created an interactive map that tracks changes to news outlets across the country.

“There have been 234 closures since 2008, about 70 per cent of those were community papers, papers that published fewer than five times a week,” Lindgren said. “At least 150 different communities were affected by the closures in different ways.”

One of Casalino’s colleagues, Kieran Delamont, a recent graduate of the Masters of Journalism program at Ryerson said he’s also upset about the Ottawa Metro’s closure, but he wasn’t surprised.

“We all knew this was a possibility,” he said. “I don’t think anyone goes into print journalism anymore without realizing the axe can fall any day. Especially to a smaller community newspaper, you’re probably in the most precarious spots.” 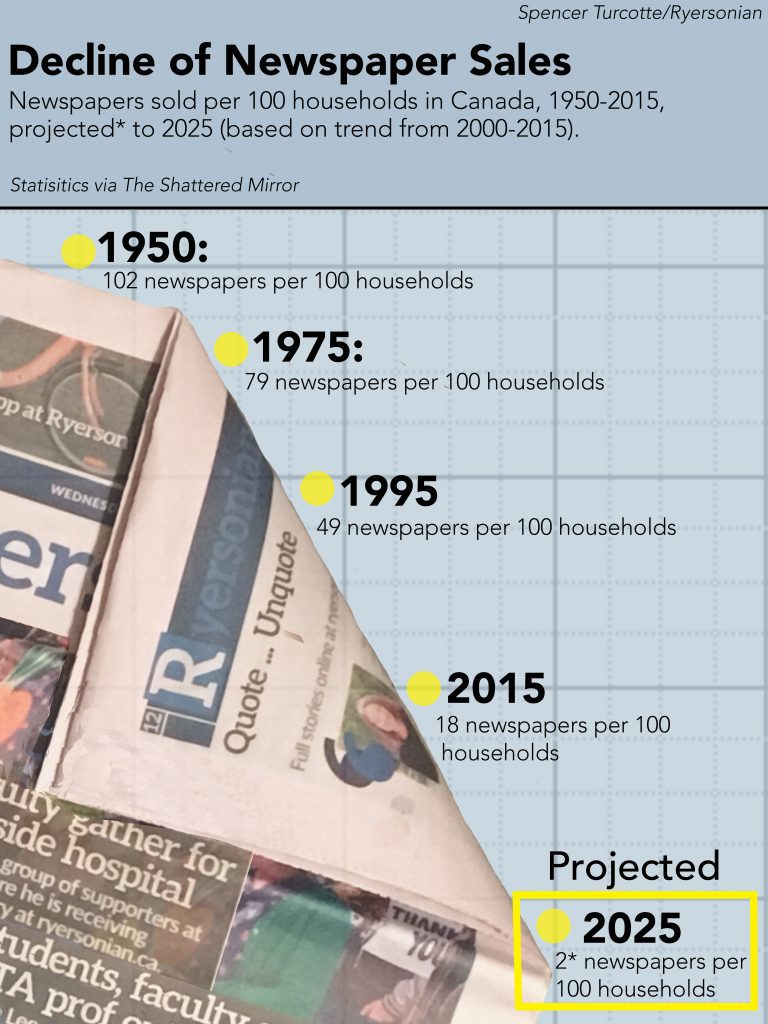 Delamont moved to Ottawa after graduating to pursue a reporting position at the Ottawa Metro. He said working at a small paper gave him opportunities he wouldn’t have had at a larger publication and with the recent closures, he thinks future students won’t get the same chance.

“[Students] are not going to have any places that by necessity are going to have to put a lot of trust into them,” Delamont said. “One of the biggest learning experiences out of [working at the Ottawa Metro] is that small places put faith in you.”

Jagg Carr-Locke, the journalism internship coordinator at Ryerson, said in her two years in this position, she has not had any students apply for internships at publications affected by the trade.

“I’m sorry to have to say that, because there are some great experiences to be had in such [publications],” she said in an email.

“[Newspapers] need journalists, they need work and they don’t have any money,” McNeil said. “They want you to work for free, which is not a good thing but this is the reality.”

Delamont took to Twitter to share his upset over the closure of the Ottawa Metro and other small town papers, he said many other have done this as well.

“Many people… got their start from community newspapers and it’s the bylines that you get out of college or out of school, or internships,” Delamont said. “The more of those [papers] that disappear, the harder it’s going to be and students are going to end up being worse off for that.”

Casalino said she’s devastated by the paper’s closure and her short-lived career at the Ottawa Metro.

“I was really excited to have a local source to sort of put my foot in the door,” she said, “but it was just kind of slamming the door in my face.”

OPINION: Michelle Obama is too expensive