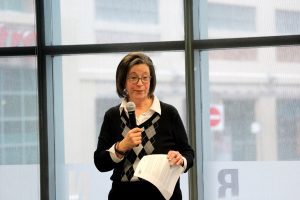 Journalists need to take time to appreciate the work they do if they are going to thrive in the industry as it faces difficult times, according to psychology professor Diana Brecher. That tip, along with nine others, were Brecher’s contribution to a day-long teach-in organized by Ryerson’s school of journalism.
“The myth is that if you’re successful you’ll be happy, but there’s a lot of research to suggest that if you’re happy, you’ll be successful,” said Brecher.
The professor spoke during a segment called “Resilience grit, and optimism.” It was one of the events held to inspire journalism students as the profession is being challenged. All classes were cancelled for the day so students could attend the various presentations surrounding the topic of how journalists should approach their careers in a precarious time.
“My motivation for doing this was the realization that I was finding it hard to keep up with the swell of information and the attacks on journalists,” said professor and event moderator Ann Rauhala. “These things were really distressing to me and I thought, if they’re distressing to me how are our students feeling about them?”
Brecher’s advice for remaining sane and being successful as a journalist included finding and focusing on our strengths, remaining optimistic in difficult and positive times, expressing gratitude, staying connected to a community, sticking to goals, and remaining calm, among others.
“I think it’s really important for journalism students to hear about it right now, because as we’ve said all along in preparing this, we are not in normal times,” said Rauhala. “What’s great about Diana is that her work is based in research. It’s not your mom telling you to get more sleep.”
This article was published in the print edition of the Ryersonian on March 16, 2017.
#media#selfcare#teachinJournalismRyerson
0 comment
0
FacebookTwitterEmail