Protesters and chicken sandwich seekers alike gathered at Yonge and Bloor streets in Toronto on Friday for the grand opening of Canada’s first Chick-fil-A restaurant.

Chick-fil-A and the WinShape Foundation, a charity affiliated with the restaurant chain, have donated millions of dollars to groups with anti-LGBTQ beliefs over the years and, in 2012, Chick-fil-A CEO Dan Cathy was quoted as saying that he believes in the “biblical definition of a family unit.”

In response, protesters handed out flyers and held up signs that read “Cluck Off” while chanting “Shame, shame, shame,” and “Hey hey, ho ho, homophobia has got to go,” in the hopes that customers would exit the line.

Darren Chang, a protester with Liberation T.O., says he attended the protest to support multiple causes.

Meghana Rajanahally, a protester with The 519, said, “I believe that nobody deserves to be oppressed, not chickens, not people who have different gender orientations, and I don’t want to be living in a world that is run by capitalistic corporations.”

Meanwhile, hungry customers waited in a line that wrapped around the restaurant at 1 Bloor St. E. to get their hands on some eagerly awaited chicken sandwiches, waffle fries and Chick-fil-A sauce. Michael Lo Guidice was just one of many who stood in line this morning prior to the restaurant’s official 10:30 a.m. opening.

“I’ve been to Chick-fil-A in the U.S. and I really enjoy it, great food, so the first chance I got to eat it in Canada, I had to go,” Lo Guidice said. He said he was undeterred by the protesters.

While many customers were apprehensive to speak to the press, protesters were eager to get their message across.

Emmett Genser and Johanna Nikoletos, event organizers from Liberation T.O., are asking the public not to spend their money at Chick-fil-A, which they see as supporting discrimination and violence. They said that, instead, people should support a local LGBTQ charity or animal sanctuary. 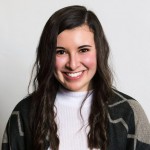