Listen to Leo: Save the planet 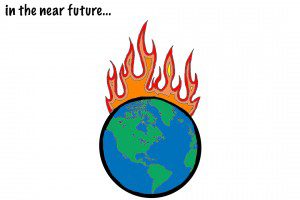 The Earth has been breaking a lot of records lately. Unfortunately, they are all related to its demise.

According to the U.S. National Oceanic and Atmospheric Administration, February 2016 was the hottest February on record. It’s becoming harder for skeptics to claim climate change doesn’t exist. Especially when people are wearing shorts in February … in Toronto.

Coincidentally, during the hottest February on record, Leonardo DiCaprio made news for winning his first Academy Award. The actor won for his starring role in The Revenant and used his celebrity platform to deliver an impassioned acceptance speech about his concern for the environment.

“It is the most urgent threat facing our entire species and we need to work collectively together and stop procrastinating,” he said.

As a whole, we have been procrastinating. For the duration of former prime minister Stephen Harper’s time in office, Canada put the environment on the back burner to say the least.

In December 2011, the country announced its withdrawal from the Kyoto Protocol, an international treaty that commits nations to reduce the greenhouse gas emissions that cause climate change. We were the first signatory to withdraw. To be frank, this is embarrassing. Leading up to last fall’s federal election, Prime Minister Justin Trudeau and the Liberal candidates talked a big game about climate change. Last November, at the climate change summit in Paris, Trudeau boldly declared, “Canada is back, my friends. We’re here to help.”

This month, when Trudeau visited United States President Barack Obama at the White House, he committed to regulating Canada’s methane emission. He has been prime minister for six months and has only made empty promises. Hopefully, at some point in the next four years, he stays true to his word.

Earth Hour 2008 saw the participation of 35 countries, with famous structures such as the Colosseum, Sydney Opera House and Golden Gate Bridge turning off their lights. It all seems well and good, but in that hour, there was only an 8.7 per cent reduction in overall energy consumption. This is a testament to the ineffectiveness of the movement. This year’s Earth Hour was from 8:30 p.m. to 9:30 p.m. last Saturday, March 19 . The initiative means well, but it is complete bullsh*t. For one hour out of the 8,760 hours of the year, people are encouraged to turn off non-essential lights. This says a lot about our dependence on electricity — that we can only consciously not use electricity for one hour of the year. Every hour should be Earth Hour.

There are many small things students can do to save the environment. For instance, buy your clothes in second-hand stores, use recyclable shopping bags, and, most importantly, turn off the lights whenever you leave the room instead of just turning them off once a year. If the environment isn’t enough of an issue for you, these tips will also save you money on water and electricity bills and shopping trips. Students are notorious for procrastinating, but as Leo says, we have to stop procrastinating when it comes to our planet.