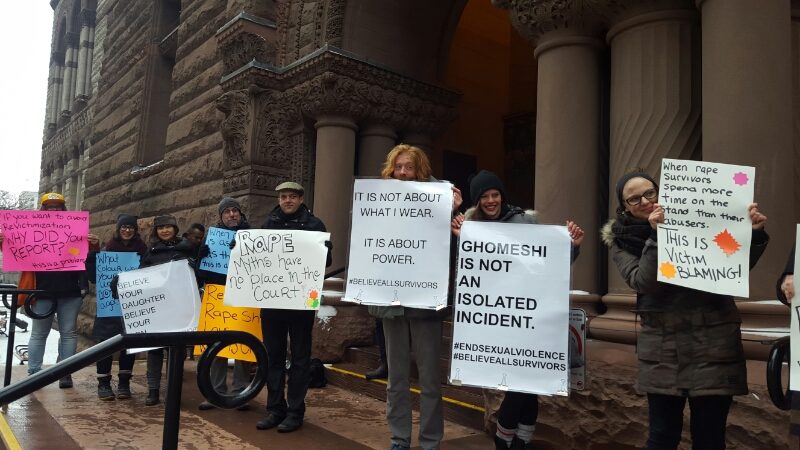 Protesters outside the courthouse the morning of Feb. 9, the sixth day of the #Ghomeshi sexual assault trial. (Kanwal Rafiq/Ryersonian Staff)

The judge for Jian Ghomeshi’s sexual assault trial ruled Tuesday afternoon that the Crown has permission to bring in a fourth witness.

Crown attorney Michael Callaghan argued that the credibility of the second witness, Lucy DeCoutere’s testimony was eroded. He argued that Marie Henein made allegations that DeCoutere lied about the alleged assaults committed by Ghomeshi, assuming that DeCoutere’s desire for fame and colluding with the third witness were motivations.

Callaghan argued that bringing DeCoutere’s friend as the fourth witness would allow Justice William Horkins to fairly assess DeCoutere’s credibility. DeCoutere confided in this witness about the alleged assaults when they happened 10 years ago and gave a statement to Toronto police confirming her knowledge.

The judge said that although he is aware of the concerns that evidence from the fourth witness could be used improperly, it would be safest for him to hear it himself to decide whether it will carry any weight in the case.

However, the witness is unable to travel to Toronto due to weather conditions in Halifax, where she currently lives. Instead, her police statement and emails will be used as evidence.

To rebut the Crown, the defense argued earlier that the cross-examination was mainly focused on emphasizing inconsistencies in DeCoutere’s testimony compared to her emails and letter written to Ghomeshi at the time of the alleged assault.

Defense counsel Danielle Robitaille said bringing the fourth witness would not change the inconsistencies in DeCoutere’s testimony. In fact, she highlighted that the defense will continue to argue that DeCoutere’s allegations were a “wholesale lie.”

Robitaille also produced a Facebook conversation between DeCoutere and the fourth witness in which DeCoutere tells her friend about Toronto police wanting to talk to her. The defense council hints that the new witness’s independence in her involvement with the police would be tested.

Defense counsel said bringing a fourth witness would unnecessarily prolong the case. She also hinted that Ghomeshi will not be testifying and the defense is ready to provide closing statements.

The judge accepted that allowing the fourth witness to testify would be an exception to the general rule that a witness’ claim is more credible because she repeated the same story on a prior occasion. However, he also said that the evidence is of “probative value.”

Court will resume Wednesday morning at 10:00 a.m. to deal with agreed statements provided by the Crown and defense.

Ghomeshi found not guilty on choking and sexual...